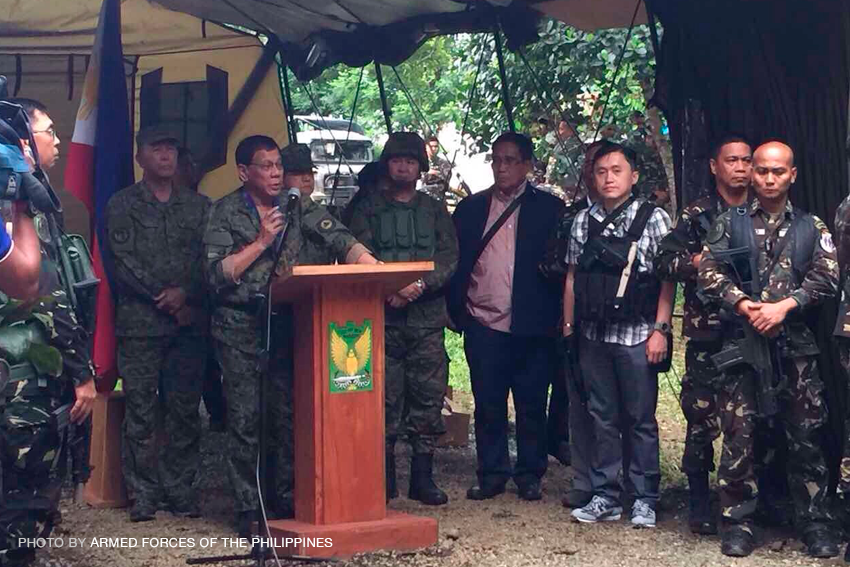 DAVAO CITY, Philippines — After the Marawi crisis, the government forces would shift the offensives against the New People’s Army.

This was announced by President Rodrigo Duterte when he visited government troops in Marawi City on Thursday afternoon. Duterte said he is not talking with the communists anymore and added that the NPA “owes” the government a lot.

“Pagkatapos nito pag maubos iyong mga ul*l diyan, magre-orient tayo, NPA na naman. Kasi marami silang utang sa atin. Ayaw ko nang makipag-usap sa kanila (After this, after we kill all the (terrorists) we will re-orient, the NPAs are next. Because they owe us a lot. I do not want to talk to them),” Duterte said.

Duterte’s statement came two days after his Presidential Peace Adviser, Jesus Dureza announced the cancellation of backchannel talks after a group of NPAs encountered by members of the Presidential Security Group in the boundary of Davao, Bukidnon and Arakan in North Cotabato province on Wednesday, July 19.

The NPA said they put up the checkpoint to “interdict military and police vehicles carrying weapons plying the route as part of the NPA campaign in response to the CPP’s call to fight martial law in Mindanao.”

Duterte was seeking the extension of Martial Law in Mindanao until December 31 this year, a move that was met by opposition for fear of the escalation of human rights abuses.

Duterte said the NPA has already killed several soldiers and police. He said even government troops who are going to the market are targeted which angers him.

If the Philippines was not a Republic, Duterte threatened he would have “cut their heads off.”

Duterte also warned troops not to be complacent and be aware of NPAs presence. He said troops should always have companions when going out of the military camp.

Duterte also told the troops to make sure that they will be the one to hit first a suspected NPA, but if it’s not an NPA, tough luck.

He also reiterated his assurance to the troops that he will fight for their rights.

Duterte who has an open relationship with the revolutionary movement in Mindanao during his stint as a mayor of Davao City said now that he is president, he cannot make any more compromises. Duterte previously received freed prisoners of war by the NPAs.

“So, even when I was a Mayor, I penetrated the areas where there was fighting, minsan pinapahinto ko iyong NPA pati gobyerno para makuha ko lang iyong—but those were the days when I could make a compromise, iyong puwede akong magbigay. Eh hindi na ako puwede ngayon, eh Presidente na ako – so different role, different duty, different mandate,” Duterte said.

The fifth round of talks that was supposed to be held next month is set to discuss social and economic reforms agenda, release of political prisoners and interim joint ceasefire. (davaotoday.com)