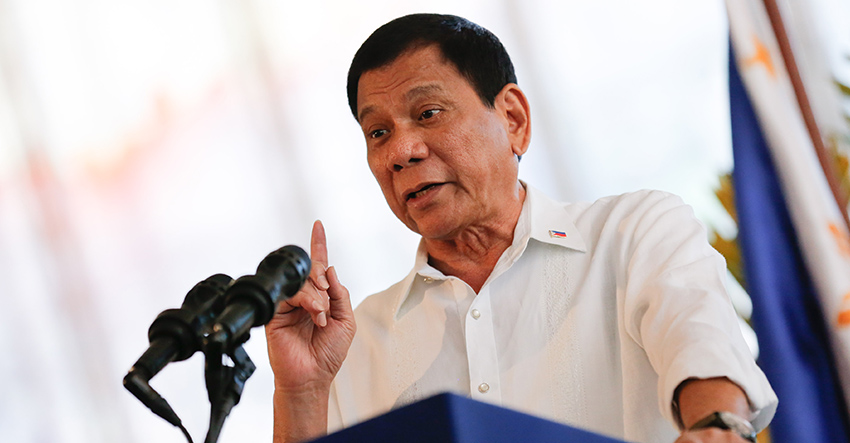 DAVAO CITY, Philippines —- Despite his stance for the government not to participate in the fifth round of formal talks with the National Democratic Front of the Philippines, President Rodrigo Duterte has recognized the offer of the communists to fight against terrorism as a sign of goodwill.

During his speech at the 102nd Infantry Brigade in Ipil, Zamboanga Sibugay on Friday, Duterte confirmed he received a letter from NDFP peace panel chairperson Fidel Agcaoili.

He said he will not allow the government peace panel to negotiate with the NDFP unless the communist negotiators would sign a document of a unilateral ceasefire.

“I will not allow any talks on my behalf, kasi nandoon si Dureza pati si Bello, I will not allow them or authorize to go back to the negotiating table without them signing a document unilateral (ceasefire), they said that they would stop fighting,” the President said.

“Sabi ko, it no longer behooves upon me to do anything… makipag-usap sa kanila until there is peace,” he said.

In its statement Thursday, June 1, the NDFP urged the government to resume the formal talks as soon as possible as it offers unity to combat terrorism.

“The GRP and NDFP must act in consonance with the Filipino people’s clamor for peace negotiations and their demand for social, economic and political reforms to address the roots of the armed conflict and lay the basis for a just and lasting peace. The GRP and NDFP must stand together to oppose and fight terrorism, terrorist groups and acts of terrorism,” it said.

The NDFP said the GRP and the NDFP “shall be bound by a ceasefire agreement” in specific areas of cooperation which the two parties may agree upon.

In a  Facebook interview with Davao Today, Agcaoili stressed “that the two sides can work out a ceasefire agreement in specific areas for purposes of cooperation and coordination in fighting Maute and other terrorist groups. At the same time, the two sides can issue unilateral but simultaneous and reciprocal ceasefire declarations to cover more areas or nationwide.”

However, Agcaoili said signing an agreement to end hostilities and disposition of forces, the fourth substantive agenda of the peace negotiations, will not be entered ahead of the signing of agreement on reforms.

“And we should remember, there is still the question of implementation. Until reforms are implemented, the issue of end of hostilities and disposition of forces (and arms) is still or remains to be discussed and settled,” he said.

The fifth round of talks which was scheduled from May 27 to June 1 did not push through after the GRP peace panel refused to participate in the formal talks citing the heightened offensives of the New People’s Army as ordered by the Communist Party of the Philippines.

The CPP made the order as it claimed that it must defend its forces and the people from the army offensives especially with the declaration of the Martial Law in Mindanao. (davaotoday.com)