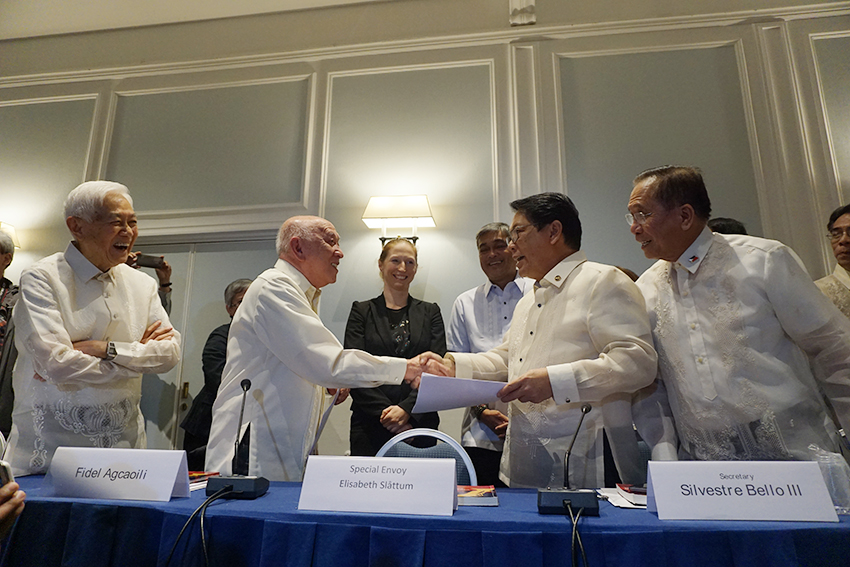 The peace negotiations between the GRP and NDFP is terminated despite having three successful rounds of talks. (file photo)

DAVAO CITY, Philippines — President Duterte may have been swayed by peace spoilers, specifically coming from within the ranks of the military, when he decided to dissolve the peace panel negotiating with the National Democratic Front of the Philippines (NDFP) and eventually terminated the services of its members.

This was the reaction made by Bishop Joel Porlares, convenor of the group Pilgrims for Peace on the latest move by Malacañang, on matters related to the peace negotiations with the NDFP.

Porlares said Duterte’s move did not complement well in the peace building efforts of various sectors in the country, adding that an all-out war policy will not result in peace.

“Duterte himself has transformed into a warmonger, quite contrary to the promises of his election platform. His toughness on corruption and criminality has not delivered any increased peace in the country,” he said.

The group also urged the president to resume the peace negotiations with the NDFP.

Another group, the Alliance of Concerned Teachers also came out with a statement, saying that the most fruitful peace negotiations now has turn into disaster as Duterte obsessively chased the path of war instead of peace.

“The last peace panels of the government and the NDFP should be credited for being the most productive in the history of peace talks for coming up with a common draft of the Comprehensive Agreement on Socio-Economic Reforms,” ACT said.

Duterte terminated on Monday, March 18 the appointments of the government peace panel members following the termination of the peace talks with the NDFP.

Termination letters signed by Executive Secretary Salvador Medialdea were sent to Secretary Silvestre Bello III, the chairperson of the Government of the Republic of the Philippines panel and panel members Antonio Arellano, Hernani Braganza, Angela Librado-Trinidad and Rene Sarmiento.

The termination letter which is effective immediately, also said: “To ensure uninterrupted delivery of public service, you are hereby directed to turn over all official documents, papers and properties in your possession to the Office of the Presidential Adviser on the Peace, Reconciliation and Unity.”

However, Presidential Peace Adviser Carlito Galvez, Jr. on Wednesday said that the termination of the appointments of panel members paved the way for the creation of an inclusive panel that will supervise localized peace engagements.

“The discontinuance of the services of the members of the GRP panel is in line with the termination of the peace talks with the NDFP. But we will reconstitute the panel at a national scope in accordance with the whole-of-nation approach we are advocating to achieve inclusive and sustainable peace,” Galvez added.

Galvez pointed out that the composition of the new panel will be based on the Colombian model which includes representatives from different sectoral groups, local government units and the military whose presence is essential to the peace negotiations.

NDFP Chief Political Consultant Jose Maria Sison, on the other hand, scoffed at the termination, saying he already expected such move of Duterte as he already terminated the peace negotiations since November 23, 2017 through the issuance of Proclamation No. 360.

He pointed out that Duterte completely ignored the NDFP policy of openness to peace negotiations and showed no interest in the peace negotiations as reflected in the schemes to use the armed conflict as an excuse for a nationwide martial law and the railroading charter change to a bogus kind of federalism to impose a fascist dictatorship on the Filipino people.

He added that the GRP should be wise enough to choose those who are willing or committed to address the roots of the armed conflict in order to attain a just and lasting peace as shown by Secretary Bello who has served as a consultant, a member, and eventually as chair of the panel since 1994.

Agcaoili also reacted on the insistence of the GRP to localized peace talks despite their firm refusal.

“Its insistence exposes the GRP’s reactionary position that the roots of the armed conflict are not structural, like poverty, social inequality, lack of education and health care for all, landlessness for the majority of the population, foreign control of the economy, politics, culture, the skewed justice system, but only local, like the lack or failure of government services, lack of police and military presence,” he said.

Agcaoili added that no social, economic, and political reforms can be expected from the Duterte regime but only more brutality, killings, suppression, the occupation of communities, corruption, fake surrenders, electoral fraud, and terrorism. (davaotoday.com)