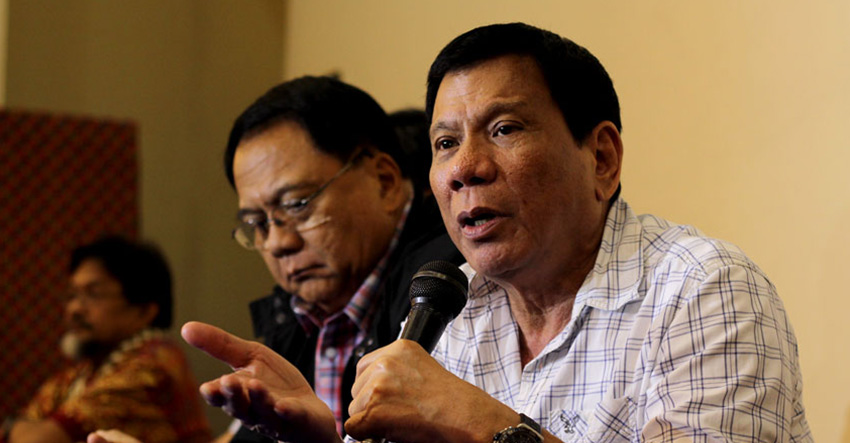 DAVAO CITY –The founder of the Communist Party of the Philippines (CPP) expressed his disappointment over his erstwhile student and presidential candidate Rodrigo Duterte’s views against labor unions.

In a Facebook post Friday, February 12, Jose Maria Sison said Duterte turned right when he ‘threatened’ labor unions from going against his policies when he becomes president.

“This runs counter to his recent statements saying he is for the workers, that he is anti-contractualization, and that he will put up steel industry and will support national industrialization,” said Sison, Duterte’s former professor at the Lyceum of the Philippines, where he took up a degree in political science.

Earlier, Duterte stirred up controversy among labor groups when he quipped that members of the Kilusang Mayo Uno (KMU) should stop organizing labor unions when his term comes. The reason, he said, is that it would ruin his administration.

KMU fired back at Duterte, describing his words as “irresponsible and disrespectful to the workers.”

Sison – who is in the Netherlands serving an exile since the end of the Marcos regime – said he was able to watch Duterte’s speech, to which he added that his statements against unions will be detrimental not only to the workers but to the country as well.

No longer comparable to Chavez

Last year, Sison likened Duterte to Venezuelan leader, Hugo Chávez, when he admitted that he is leftist and pro-left and that he is ready to have a coalition government with the CPP.

However, on Friday, he clarified that with Duterte switching views on labor rights, he may not likely be comparable to the late president who founded the Revolutionary Movement-200, a clandestine movement which attempted to overthrow Venezuela’s government in 1992.

“I said maybe he can be the Filipino version of Hugo Chavez if there will be changes in the country under his administration. But clearly, he has turned to right in his statements,” Sison said in Filipino.

Sison added that Duterte has become an ally of the progressive forces in some issues but not all the issues.

“Even Hugo Chavez is not a revolutionary on the level of being a Communist, but a populist social democrat only,” he said.

Duterte’s rating in February rose to 24 percent in February compared to his 20 percent rating in January, according to the latest Social Weather Stations survey. He “statistically tied” with rival candidate Senator Grace Poe at the second place.

Vice President Jejomar Binay remains to lead the polls at 29 percent, albeit slipping down from 31 percent last month. Meanwhile, the administration’s bet Manuel “Mar” Roxas II remains to lag in the survey, along with Senator Miriam Defensor-Santiago. (davaotoday.com)