Davao City – City Mayor Rodrigo Duterte warned foreigners putting up business in the city to follow the law lest they would be asked to “leave the city or be persecuted”.

This after around 200 Indian nationals who are taking up medicine in Davao Medical School Foundation (DMSF) complained before the city administrator regarding their dormitory manager.

Dr. Ashin Mohan, also an Indian national, allegedly threatens the dormers of deportation if they would not follow his demands.

The mayor has tasked the Crime Investigation and Detection Group (CIDG) to come up with a report on the case by Wednesday.

“Tell your chief to conduct an investigation immediately and give me a report,” he said.

“This is a criminal case. This involves extortion. So this Dr.Ashin Mohan should be called to explain,” said Duterte.

“If there’s a violation of law like operating the dormitory without permit or clearance from the city then that’s one offense,” said Duterte.

According to reports, the students were recruited by Transworld Education Academy Pvt. Ltd. to study at DMSF.

Mohan has entered partnership with the chief executive officer of Transworld, David Pillai.

The agency is “the principal education associate” of DMSF “for student-applicants to its MD Program in India” from 2012 to 2017 according to the school’s website.

In a paper obtained by Davao Today, Schedule of Violations & Penalties of DMSF Dormitory, MTRC Building 1 & 2 All dormitories/hostels managed by Transworld showed various dormitory violations with penalties ranging from P2,000 to 100,000. 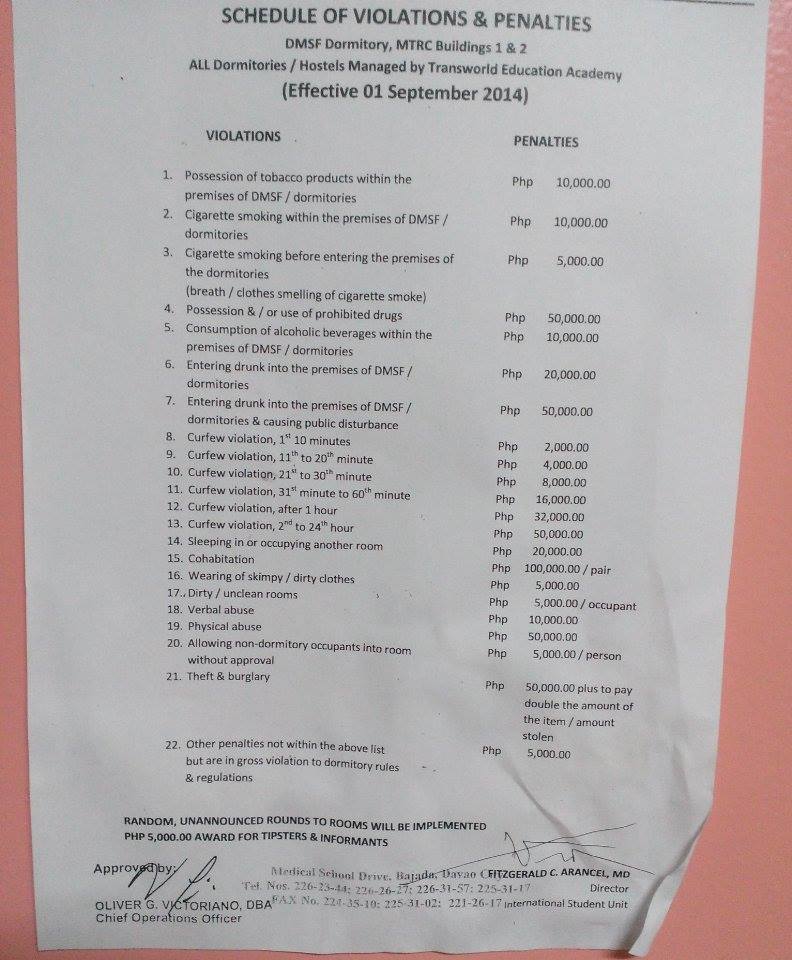 One student who attended the hearing with City Administrator Melchor Quitain last Thursday, said they want to leave the dorm because of the policies imposed by the dormitories and the threats they get from Mohan.

“We’re here to become a doctor but how can we be one if our studying is affected,” said first year medical student Valerie Kodali who cited that the lights in the dormitory are turned off early affecting their studies.

They are also cramped inside one room where there are eight bedspacers.

Duterte also said that he has not heard anyhing from the Bureau of Immigration and that he would talk to the agency if the allegation is true.

Duterte also reacted to a case previously handled by program host, Atty. Geraldine Tiu, where a student who is half Filipino, was consistently visited by agents of the BI. Tiu said they worked out on achieving recognition of their client’s Filipino citizenship.

The mayor warned the Bureau not to extort foreigners in the city.

“Kaning immigration, time and again, kapila ko na ni gibadlong. It’s either tarongon ninyo inyong trabaho. Ug inyong pangilkilan, akoy modakop gyud ninyo. I myself would arrest you and you’d better surrender kay og dili gani pusilon ta gyud mo (I have warned the immigration for a number of times already. Do your jobs well. If you extort them (foreigners), I myself would arrest you and you better surrender or else I will shoot you),” Duterte said.

Duterte also warns Bureau of Customs to do the same.

“In the past, previous incidents here in the city would tell us that this was the practice. I hope it will stop,” said Duterte.

“If you want something out of the aliens here, you have to do it the proper way, invite them to your office, open view,” he said.

Duterte said government agencies should not “hinder the progress of the city by giving it a bad name”. (With reports from Ace R. Morandante/davaotoday.com)