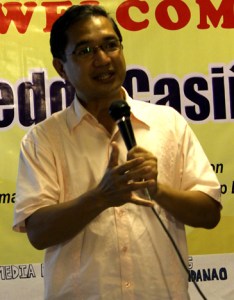 The government’s role is under increasing scrutiny, in the heels of a new mining policy that would decide the fate of large-scale mining and mining operations in the country.

DAVAO CITY, Philippines — If the Mines and Geosciences Bureau (MGB) would have its way, they would like to hire additional drillers, geologists and community relations officers.  This, as a new mining bill proposes to “reorient” the bureau to become a scientific research institution that will explore and identify strategic mineral resources.

“It’s really not easy.  We can’t even get technical personnel now because they consider the government salary a pittance.  There’s a limitation on financial and availability of technical personnel,” mining engineer and lawyer Wilfredo Montano, chief of the Mine Management Division of the regional MGB, told davaotoday.com.

The government’s role is under increasing scrutiny, in the heels of a new mining policy that would decide the fate of large-scale mining and mining operations in the country.

Bayan Muna Representative Teddy Casiño authored a bill in Congress called the People’s Mining Bill (HB 4315).  In a press briefing here, he presented the salient points of the bill in contrast to the controversial Philippine Mining Act of 1995 (Republic Act 7942).

Casiño said many problems “stem directly from the wrong policy framework of the mining industry.”  He said the country’s current mining law is designed to meet the demands of international market rather than the local market.  He added it has nothing to do with the country’s industrial programs and is very disadvantageous to the local communities and national government.

In a nutshell, RA 7942 or the Philippine Mining Act, which Casiño tags as the “sweetheart deal” of mining companies, grants 100 percent ownership to foreign mining companies and 100 percent remittance to their mother company.  It allows these companies 25 years to operate that is renewable for another 25 years.

The People’s mining bill, on the other hand, is to “preserve the country’s mineral resources,” said Casiño.  He added, mining should always be in consideration to the people and the environment as well as it should be domestic-oriented.  The country’s own industry should primarily benefit from mining as he stressed that “the real value of mineral resources is that it’s a key ingredient in industry.”

Meanwhile, MGB’s Montano, said “it is okay” if they will be tasked to conduct exploration, “provided that there is enough funding because that has been our problem, that’s why we pass that to qualified private persons because our government has no funding for exploration.”

Montano said the simplest stage of exploration, the first stage, would amount to at least PHP 3 million (USD 70,125) per year for every 1,000-hectare area.  “Exploration is a risky operation.  There’s no assurance that it will hit,” he added.

Meanwhile, the MGB echoed the sentiments of the mining business sector when it was not invited in last month’s international conference on mining initiated by the Catholic Education Association of the Philippines and the Ateneo de Davao University (Addu).

“We were really disappointed.  We were not given the opportunity to present our side,” Montano added.

Representatives from the Chamber of Mines (COM) were also not allowed.  It issued a full-page paid advertisement in a national broadsheet, scoring the conference for its “bias.”

But, Jesuit priest Joel Tabora, Addu president, said during the forum, “We operate in academic freedom.  Nobody outside the academe or this university has the right to determine our academic agenda.”

He added they are not against listening to the mining companies if only they don’t destroy the environment, including the people, streams, water resources and forests.  “We have to get together to be able to convince our policy-makers what these people are about and that this is not acceptable to us.  We are here to join our forces and resources together in defense of our environment and in defense of our people,” he said.

Bayan Muna’s Casiño said, “The message was echoed loud and clear, throughout the whole country, that the people of Mindanao are against destructive large-scale mining,” he said.  (Marilou Aguirre-Tuburan/davaotoday.com)