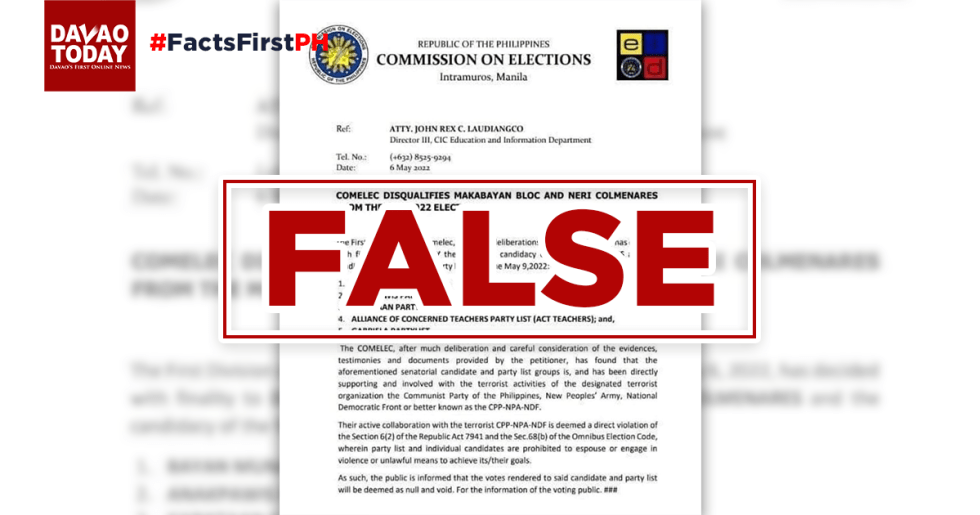 CLAIM: A COMELEC Resolution dated May 6 states that the Makabayan Bloc party-lists and Senatoriable Neri Colmenaries are disqualified. The basis of the disqualification is the link of these party-lists and Colmenares to the terroristic activities of the CPP-NPA-NDF. This post is being circulated in social media.

The Commission on Elections (Comelec) denied issuing a resolution disqualifying the Makabayan bloc party-lists Bayan Muna, Gabriela, AnakPawis, Kabataan and ACT Teachers and its senatoriable Neri Colmenares in the May 9 elections. Comelec Commissioner Aimee Ferolino-Ampoloquio made this statement.

The Comelec First Division a resolution dated January 3, 2020, junked the petition of Kababaihang Maralita Secretary-General Angela Aguilar cancelling the registration of the groups under the Makabayan bloc as party-list groups and the disqualification of Colmenares as a senatorial candidate.

Comelec noted in the resolution that Aguilar failed to provide evidence to support her claims that they are connected to the New People’s Army.She did not attend the hearings on her petition and that she could not be located in her given address.

Makabayan said that the fake resolution post circulating on social media the is part of the desperate moves probably coming from the NTF-ELCAC to block their bid for genuine representation in Congress. They appeal to the people not to believe the fake information circulating in social media and urged Comelec to make an official statement.