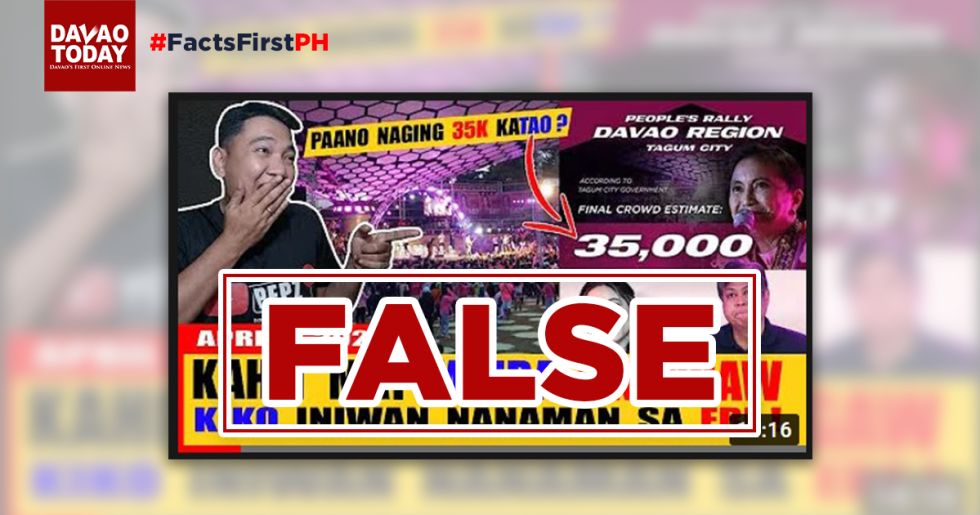 CLAIM: The rally of the Partido Reporma party in Tagum City in support of presidential candidate Leni Robredo was a flop.

A video commentary made by YouTuber PepzTV, whose channel describes itself as a defender against Duterte critics, claimed the Partido Reporma Rally held in Tagum City last April 7 did not draw a huge crowd in support of the presidential bid of Vice President Robredo.

In that headline, the commentator claimed the rally did not reach 35,000 people as Robredo’s Facebook page announced by showing video clips of the early part of the program in the afternoon where the crowd was still gathering.

The claims are misleading as it leaves out a lot of details and context.

Alvarez’ Partido Reporma has withdrawn its support to its standard bearer Senator Panfilo Lacson, but the party continues to support the candidacy of Senator Tito Sotto for Vice President. Pangilinan was not invited to be part of the rally.

The City Government of Tagum has officially declared the estimated crowd attendance was 35,000, and there are photos and videos shared on social media.

There are also video clips of the rally where Robredo spoke of her platform and her alliance with Reporma based on the common belief on good governance and clean, honest leadership.