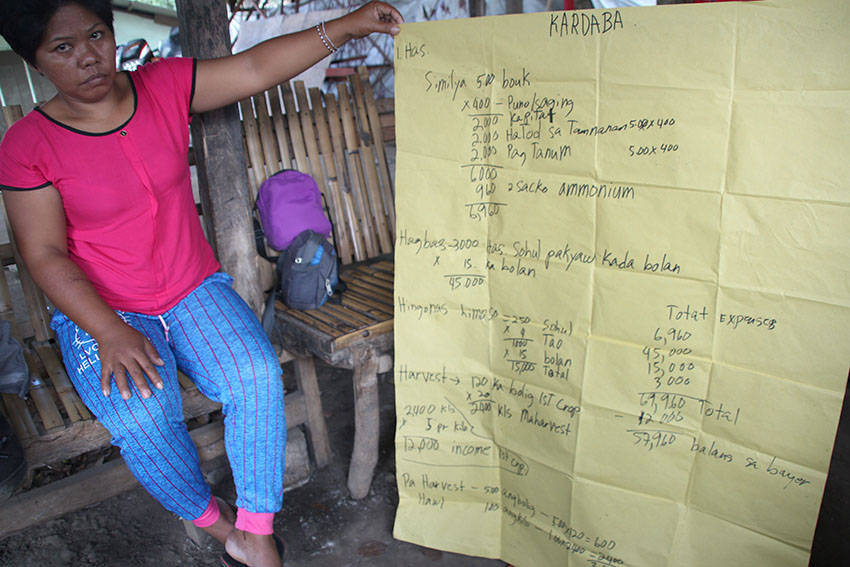 CYCLE OF DEBT. Banana farmers from Montevista, Compostela Valley are plunged into cycles of debt with their buyers, who pay a meager price for their produce. In this photo, a farmer shows the computation of his indebtedness, saying he net​s​ only P12,000 per harvest ​at ​a single hectare, against the combined total of P69,960 capital that he put​s​into the whole planting and harvesting process. (Paulo C. Rizal/davaotoday.com)

DAVAO CITY, Philippines — Farmer Jimuel Taipen, chairman of Montevista Farmers Association says he and his fellow farmers are facing two kinds of calamities: the low buying price of their sellers, and ​increased militar​y activities​ brought about by Martial Law.

In an interview with Davao Today on Thursday, Taipen complained that the prices of their bananas is so low that it no longer leaves them enough to break even, much less make a profit out of it.

Taipen said their bananas are currently selling only for ​P5 to ​P6 per kilo. ​From this amount, they still have to subtract expenses for transportation from their farms to where buyers would agree to meet them.

Th​ey usually earn P4 to for each kilo of banana.

A typical hectare for Taipen yields 2,400 kilos of bananas. If sold at ​P5 per kilo, Taipen can earn a net of P12,000. The problem, however, is that he had to allot a total of P69,960 for the whole planting process and harvesting process, which leaves him a P57,960 deficit.

In order to still feed his family of nine, the 54​-​year​-​old farmer will have to rely again on loans from his buyer as a cash advance. For farmers like Taipen, this leaves them in a cycle of debt that has put them into the brink of desperation.

One option that farmers have to get out of this cycle of debt is to sell their lands to companies seeking to consolidate lands for their palm plantations. Taipen and many farmers in their area, however, have continually resisted these offers.

This problem is compounded by the chilling effect brought about by soldiers who would regularly target New People’s Army guerrillas in the countryside.

Taipen said he and many farmers cannot tend to their farms anymore for fear of being accused as NPA sympathizers even before Martial Law was declared. The declaration, he said has pushed them to leave their farms for their lives.

He said when Martial Law was proclaimed, farmers were worried that they will be targeted and will bear the brunt of the fighting.

Taipen said they only work hard to survive and to send their children to school, however, even this proves impossible when their lives are put at stake.

“Bisag mga pobre ta naingkamot ta nga ang atong mga anak makakat-on pud ug taas nga edukasyon pero ingon ana nga kalamidad sir nga nanghasi na ang mga miltiary sa bukid, sami kaayo sa among mga plano (Even though we are poor, we are working hard for our children to attain education. However, with this calamity of soldiers harassing us in the countryside, this stands in the way of our plans),” he said.

Because of this, Taipen said they are calling on the provincial government of Compostela Valley to act on their plight.

Taipen is also calling on President Rodrigo Duterte to fulfill his promise of “real change.”

“Unta lingion niya ang iyang mga saad sa katawhan. Gilauman sa mga katawhan sa tibuok Pilipinas nga siya ang makasulbad sa tibuok nga gipas-an sa katawhan nianing atoang nasud (I hope he looks back to the promises he made to the people. The people of the whole Philippines hopes he may be the one to solve the problems carried by the people of this country),” he said. (davaotoday.com)