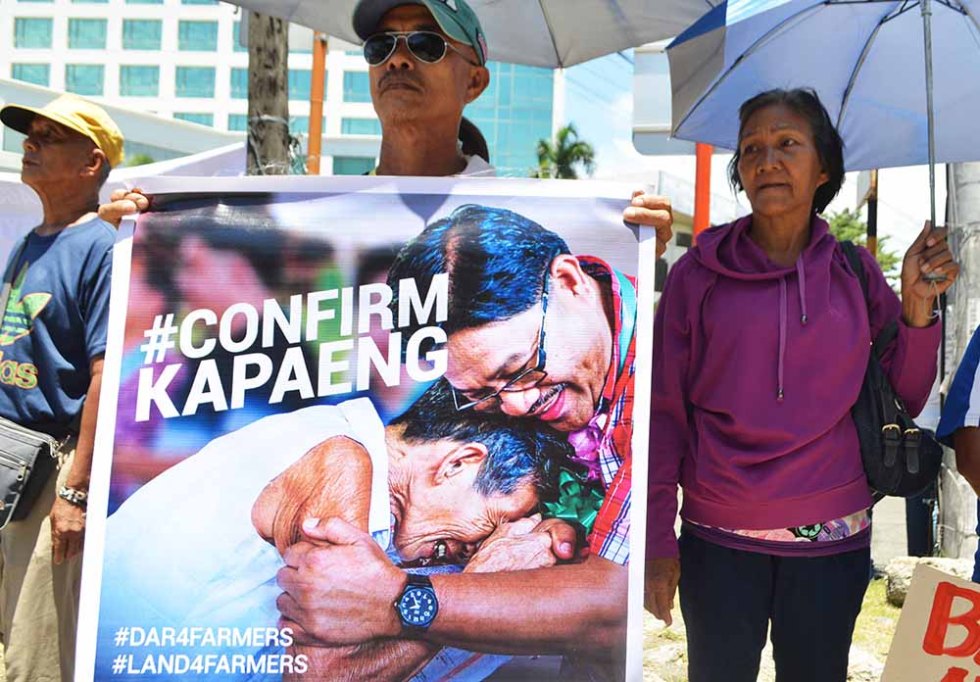 AGRARIAN BENEFICIARIES. Farmers from Davao region gather along Roxas Avenue in Davao City to show support for Agrarian Reform Secretary Rafael Mariano who was scheduled to meet with the Commission on Appointments Tuesday, Sept. 5. Mariano’s confirmation was deferred for the second time. (Medel V. Hernani/davaotoday.com)

Nono Caspillo, 49, and one of the Board of Directors of Wadecor Employees Agrarian Reform Beneficiaries from Carmen, Davao del Norte said they have been waiting to own the land given to them by the government as Comprehensive Agrarian Reform Program beneficiaries since 1988.

“In 1988, the area was proclaimed to be covered by the CARP. But the Tagum Agricultural Development Company Inc. (Tadeco) requested for another 10 years deferment period saying their investment has not returned yet,” he said.

Caspillo said the deferment period lapsed in 1998 and the farmers claimed the land. However, he said the company wanted them to agree on a “lease-back scheme” where Tadeco would rent the land worth P5,000 per hectare per year.

“We did not agree on it and that was when our hardships started. We were harassed,” said Caspillo, a former aerial operator in the farm.

In 1999 they protested and the ARBs were “forced” to get out of the land. Until now, Caspillo said 193 ARBs are still awaiting resolution of the dispute.

Meanwhile, Lito Marzado, 52, said around 250 members of the LINDERBAI are also waiting for the resolution of their case involving 448 hectares of land in Panabo City.

He said he was thankful for President Rodrigo Duterte’s appointment of Mariano who comes from the farmers’ sector.

Mariano, a former representative under Anakpawis Partylist and a leader of Kilusang Magbubukid ng Pilipinas, was nominated by the National Democratic Front of the Philippines to be appointed by Duterte as part of revolutionary movement’s peace negotiations with the government. 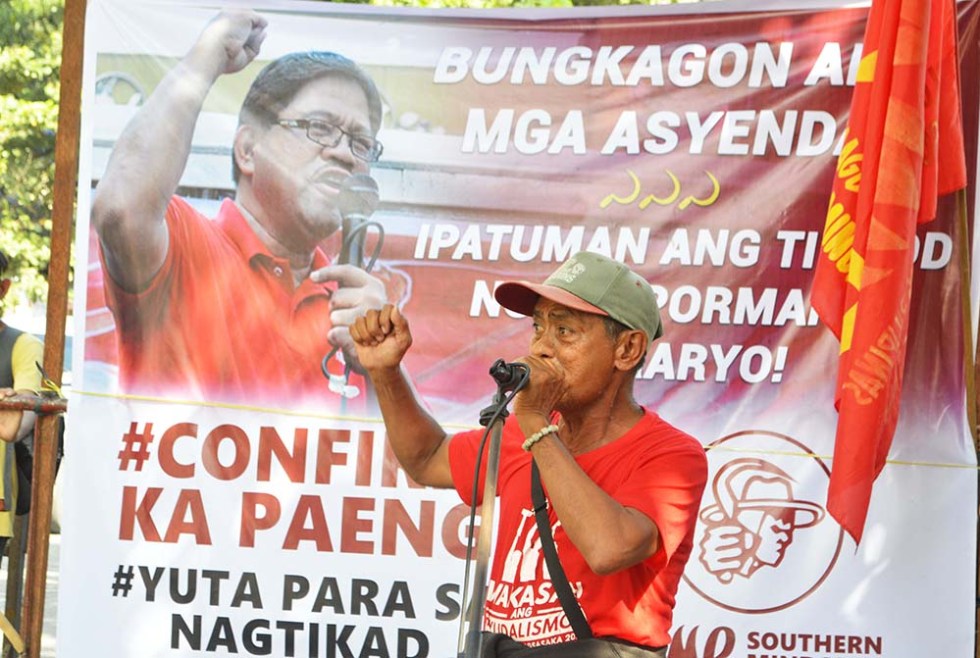 AGRARIAN BENEFICIARIES. Farmers from Davao region gather along Roxas Avenue in Davao City to show support for Agrarian Reform Secretary Rafael Mariano who was scheduled to meet with the Commission on Appointments Tuesday, Sept. 5. Mariano’s confirmation was deferred for the second time. (Medel V. Hernani/davaotoday.com)

Caspillo and Marzado were among the farmers who troop to Roxas Avenue here on Tuesday, Sept. 5 to show support for the confirmation of Mariano who is scheduled to face the Commission on Appointments anew after his deliberation was suspended on August 30.

Both said Mariano’s advocacy leans towards the welfare of the farmers and they are hoping to own the land soon.

Lito Lao, vice chairperson of Kilusang Magbubukid ng Pilipinas in Southern Mindanao region said they are currently assisting 11 organizations of agrarian reform beneficiaries who are awaiting the resolutions of their petitions before the Department of Agrarian Reform (DAR). Two of these organizations were already installed by the agency.

Lao said Mariano has been instrumental in the installation of 159 beneficiaries under the Madaum Agrarian Reform Beneficiaries Association Inc in the 145-hectare farm in Barangay San Isidro, Tagum City and in the 3,878 hectares covered by the reservation area inside the University of Southern Mindanao and the Cotabato Foundation College of Science and Technology.

In an interview with Davao Today, Lao mentioned the following disputed lands:

However, Presidential Proclamation No. 1253 signed by former President Fidel V. Ramos on June 15, 1998 mentioned only an estimate of 4,100 hectares of land in Marilog district here for “research, extension, instruction purposes, watershed and forest rehabilitation and protection, bio-diversity conservation, crops and livestock production and management including, upland communities training and development center” of UP Mindanao.

Rene Estremera, public relations officer of UP Mindanao told Davao Today that the land “is not owned or titled to UP Mindanao.”

“We (are) just mandated to effect development there,” he said.