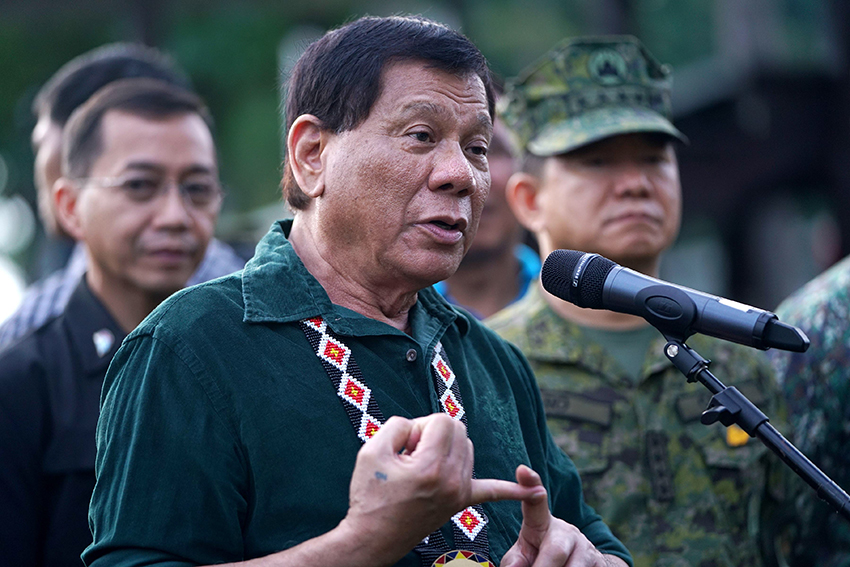 President Rodrigo Duterte, in an interview on the sidelines of his visit to the 403rd Infantry Brigade Headquarters at Camp Bahian in Barangay Impalambong, Malaybalay City, Bukidnon on July 6, 2017. (JOEY DALUMPINES/PRESIDENTIAL PHOTO)

DAVAO CITY, Philippines – Whether or not its duration will be extended and area of coverage expanded, the fate of Martial Law in Mindanao is now in the hands of President Rodrigo Duterte.

The defense department said in a statement on Sunday that it has submitted its recommendation to President Duterte last July 13.

The submission of the recommendation came out to be earlier than what the Armed Forces of the Philippines have been pronouncing the past week.

AFP spokesperson Brig. Gen. Restituto Padilla, Jr. told reporters last week that they expect the submission of the recommendation to the President in one week.

“The Department of National Defense has submitted to the Office of the President its recommendation on July 13 whether or not to extend Martial Law in Marawi and the whole of Mindanao. This was confirmed by Defense Secretary Delfin N. Lorenzana today, 16 July 2017, six days ahead of the 60-day Martial Law period per Proclamation No. 216, which ends on 22 July 2017,” the DND said in a press statement.

Defense Secretary Delfin Lorenzana did not elaborate any details on the contents of the recommendations as he does not want to pre-empt the decision of the President.

“We will have to wait for the President’s final decision on the matter. What I submitted to him was my recommendation from the security sector as Administrator of Martial Law in Mindanao after consulting with the CSAFP (Chief of Staff) Gen. (Eduardo) Año. The President has a lot more to consider,” Lorenzana said.

Other factors that President Duterte will weigh are the reports of other agencies of the government, including that from the Department of Interior and Local Government and the Philippine National Police, he added.

“I fully trust the President’s judgment on this whether he considers my recommendations or not,” he pointed out.

Lorenzana serves as administrator of martial law implementation in Marawi and the rest of Mindanao.

He is also the designated chairperson of the Task Force Bangon Marawi to oversee the rebuilding and rehabilitation efforts of the government in the war-torn city.

In the same statement on Sunday, Lorenzana described the upcoming rehabilitation and rebuilding works in Maraw as “more daunting considering the extent of damage wrought into the city.”

“While we have already begun laying the foundation for the reconstruction, recovery, and rehabilitation of Marawi City through community engagement, coordination with various agencies and making post disaster assessments, we earnestly look forward to the end of fighting because we want our Maranao brothers and sisters who have left their homes to go back, reconstitute their interrupted lives and partner with us on how we can best rebuild Marawi into a better and more beautiful city,” Lorenzana said. (davaotoday.com)