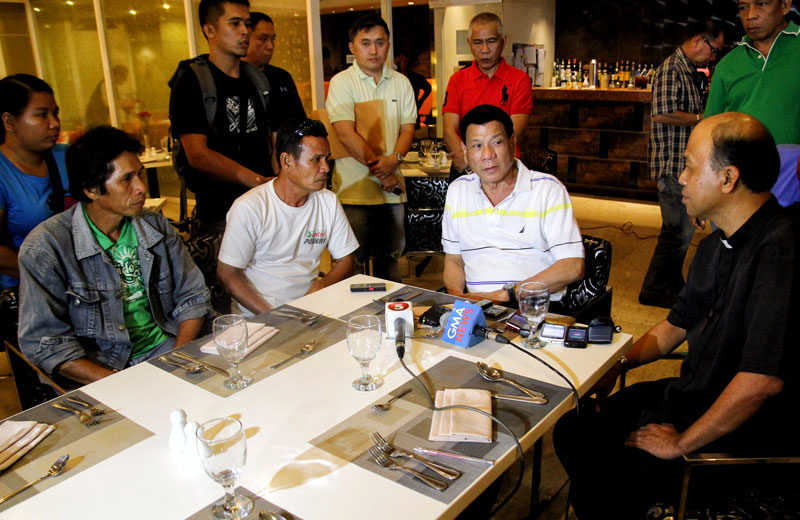 DAVAO CITY, Philippines — The fathers of two of the five government troops who were held captives by the New People’s Army (NPA) have sought the help of Third Party Facilitator and peace advocacy group Sowing the Seeds of Peace in Mindanao and newly installed Davao City Mayor Rodrigo Duterte for the safe release of their sons.

Pasigas, Jr., along with Corporal Emmanuel Quezon and Privates First Class Vernie Padilla, Ronald Gura and Donato Estandian of the 60th Infantry Battalion-1003rd Brigade-10th Infantry Division, was captured by a unit of the NPA’s 1st Pulang Bagani Battalion in a checkpoint at the Paquibato Proper village last June 17.  The group’s ranking official, First Lieutenant Neven Canitan, left his men by escaping from the checkpoint.

The five were eventually declared as Prisoners of war (POWs).

Pasigas, Sr. who had heard about how the communist guerillas treated well a number of their captives, said he expects the same will be accorded to their sons.  Like many poor soldiers, he added, his child joined the Army to uplift their family’s economic condition.

“Pa, magsundalo nalang ko para makatabang ko sa imo ug makapaskwela ko sa akong mga manghod (Pa, I’m going to join the Army so that I can help you and send my younger siblings to school),” the elder Pasigas recalled his son saying.  His son, he added, also pays for the heart medication of his mother.

Meanwhile, Quintino Gura, 53, said his son Ronald was with them on vacation before he reported back to his post in Paquibato.

“I already miss him.  I hope he’ll soon be released,” he said.

Both of father and son were farmers in Mawab town, near the 10th ID headquarters, before Ronald decided to join the army.  He was a computer technician.

Appeal to the military

The elder Pasigas appealed to the military hierarchy to do whatever is necessary for the safe release of his son and the other four NPA captives.

“Unta maluoy sila (military) sa amo, motabang sila nga makagawas na among mga anak (I hope the military will took pity on us and help us for the release of our sons,” he pleaded.

The military has gone on pursuit and rescue operations.  It earlier said they won’t settle for any negotiation with the communist guerillas.

Both fathers hoped that their loved ones will be safely released.

As in the previous POW releases, a suspension of military and police operations is called for the safe and orderly release of the POWs.  But while the military and police hierarchies didn’t make any public declaration, the captives have been freed as expected.

Meanwhile, Duterte claimed that Ka Parago has assured the safety of the POWs.  However, he explained to the respective families that the process of releasing the captives will not be done in an instant.

“Previously I asked the NPA to treat them well, to feed them well.  But really that’s a redundancy.  You know that it is not the work of the NPA to torture their captives,” he told reporters here on Tuesday.  He added the NPAs “only warn intelligence agents from entering their areas.”

He reiterated that the peace process between the Government of the Philippines (GPH) and the National Democratic Front of the Philippines must continue, as he sees no end to the insurgency if the GPH insists on combat military operations as the solution.  (John Rizle L. Saligumba/davaotoday.com)