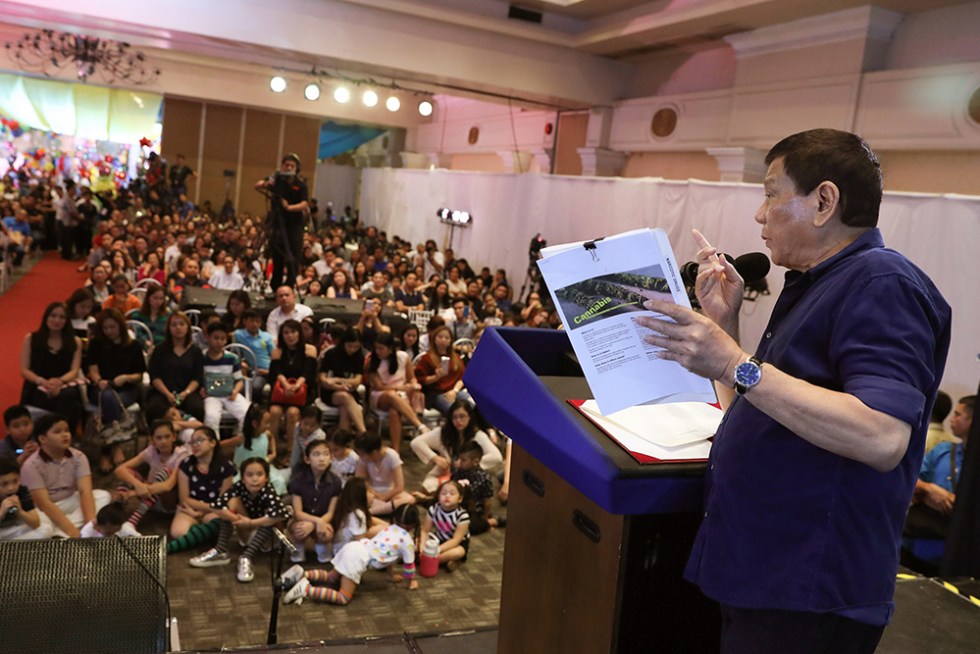 President Rodrigo Duterte during his speech during the 25th founding anniversary of the Center for Brighter Beginnings, Inc. (CBB) at the Davao Convention and Trade Center in Davao City on October 27, 2017. (ROBINSON NIÑAL JR./PRESIDENTIAL PHOTO)

DAVAO CITY, Philippines — How did President Rodrigo Duterte explain his strong leadership style to a group of young students who are mostly preschoolers?

The President used the good guy versus the bad guy story with the occassional cusses although not addressed to his young audience when he graced the 25th anniversary celebration of the preschool, Center for Brighter Beginnings, Inc. at the Davao Convention and Trade Center Friday night, October 27.

“Alam mo anak, alam mo bakit minsan nakikita niyo akong nagagalit sa TV? Kasi yung mga bad people ayaw ko sila dito (Do you know why you see me angry on television? Because I do not like the bad people here in this world),” Duterte said.

The President added: “Gusto ko silang mawala para walang gugulo sa buhay niyo (I want them gone so there will be nobody who will cause you trouble).”

He said he wants the world to be only for those who are “matino” (good) and justified why killings were happening in the face of the government’s intense war against drugs.

Duterte even lectured on the different chemicals showing his audience data called “precursors and chemicals frequently used in the illicit manufacture of narcotic drugs and psychotropic substances” from the International Narcotic Control Board.

He, again, criticized human rights groups who are critical of his anti-drug campaign and the extrajudicial killings.

“I’m just saying that if you create a problem for us, I will take you out. Bahala na anong sabihin ng t*** i**** human rights na yan (I don’t care what the son of a b*tch human rights will say),” Duterte said

In a survey conducted by Pulse Asia from September 24 to October 30, 73 percent of respondents believe extrajudicial killings happen with the governments war against illegal drugs. The same survey also showed 88 percent support the anti-drug campaign. (davaotoday.com)