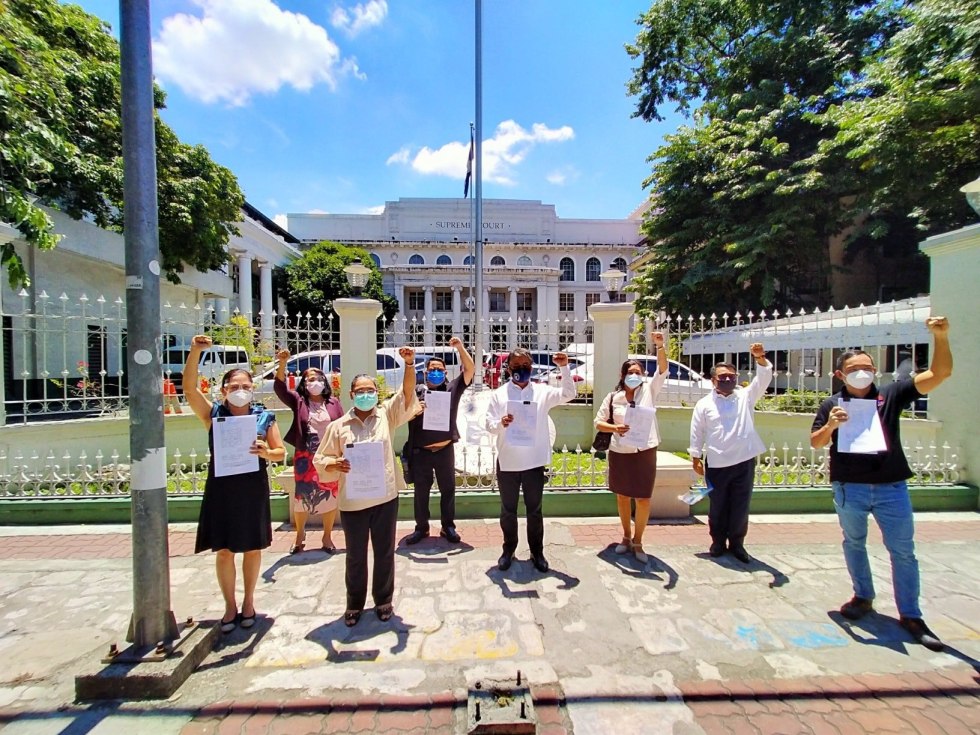 The Makabayan Bloc files a petition against the Anti-Terrorism Act of 2020 at the Supreme Court on Monday, July 6, 2020. (Photo courtesy of Makabayan)

DAVAO CITY, Philippines – After the signing of the anti-terrorism law, the battle shifts to the High Court as different groups started filing petitions questioning the legality of the contentious law.

On July 4, lawyers and civic groups jointly submitted the first petition via e-mail at the Supreme Court to question the Anti-Terrorism Act of 2020 or Republic Act 11479.

The petition for certiorari and prohibition against the law was filed by Lawyer Howard Calleja, a law professor of Ateneo de Manila and La Salle.

The petition also came with a plea for the issuance of a temporary and writ of preliminary injunction and/or other injunctive remedies.

In a post from Calleja Law Firm, “the group advocates a just and humane law that is for the benefit of all Filipinos.”

“While threats to our national security need to be addressed, the law, as crafted, is oppressive and inconsistent with our constitution, hence, the petition. This fight against Terrorism should not and should never be a threat to the fundamental freedoms of all peaceful Filipinos,” the statement reads.

The group presented their physical petition at the Supreme Court on Monday, July 6.

Other groups who filed their petition on Monday was led by Albay Representative Edcel Lagman and the Far Eastern University College of Law.

Lagman challenged the constitutionality of the law questioning the warrantless detention of up to 24 days of terrorist suspects without due process, saying this is an “unreasonable seizure of a person in violation of the Bill of Rights.”

The fourth group to challenge the new law is the progressive Makabayan coalition. The group, led by their members in the Houes of Representatives and their national officers, asked the Supreme Court to declare RA 11479 as null and void.

The Makabayan bloc argued that the definition of terrorism is overbroad and vague and could also punish free speech and expression particularly those critical of the government.

“Self-censorship will abound, as Filipinos will fear the sweeping powers of the police, military, and other enforcers of RA 11479, such as arrest without warrant for up to 24 days on mere suspicion of being a “terrorist,” they pointed out.

The group urged the High Court to strike down the law “before a single person is silenced, or before anyone is arrested and detained without any warrant.”

They also raised that the 90-day technical surveillance and wiretapping of communications under the law violates the fundamental right to privacy of a person which is guaranteed by the Constitution.

The Makabayan bloc recognized the need to combat terrorism but argued that it should not be at the expense of people’s basic rights.

“It must never be done through unconstitutional means, otherwise, the enforcers are susceptible to turn into terrorists themselves, terrorizing the members of society by depriving them of the mantle of protection accorded by Constitution,” they said.

“A draconian law such as the Anti-Terrorism Act of 2020 has no place in a democratic society, and must therefore be struck down,” it added.

Other groups like the National Union of People’s Lawyers are expected to file their own petitions against the new law. Retired Supreme Court justice Antonio Carpio previously said he will join a petition to challenge RA 11479. (Ken E. Cagula and Mara S. Genotiva/davaotoday.com)