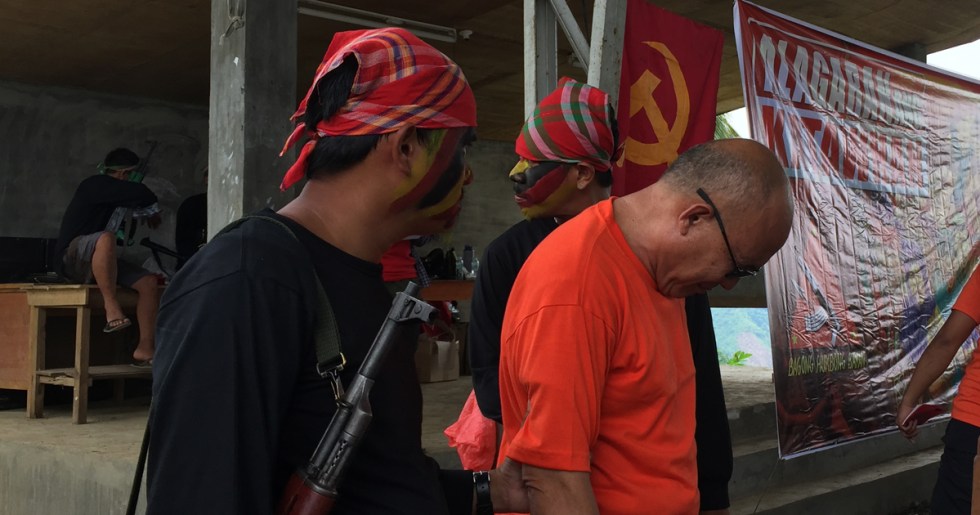 MOURNING. SPO2 George Rupinta learns of his father-in-law’s death on the day he was released by the New People’s Army on September 15. (Mick Basa / davaotoday.com)

COMPOSTELA VALLEY, Philippines – On the day his captors set him free, S​enior ​P​olice ​O​fficer ​2 George Canete Rupinta’s wife broke another news: his father-in-law had passed away.

Rupinta, who was released on Friday, September 15, burst into tears upon hearing ​of the news just few minutes the New People’s Army (NPA) formally released him after ​three ​months in captivity.

“This day gave me double celebration,” Mrs. Rupint said, a welcome and a farewell.

A welcome, she said, because their 52-year-old head of the family has been set free. A farewell, because it has been forty days “since my father’s death.”

The police officer, who was wearing a white shirt and dark eyeglasses, left his seat and walked away from his family, and wept anew, not long after he was welcomed by his wife and only son with embrace and tears.

“I’m happy that I have been released, but it broke my heart when I learned that my father-in-law had died,” Rupinta told reporters.

His father-in-law died while he was held in captive by the NPA beginning June 9, allegedly for his unit’s “anti-people activities” in Lupon, Davao Oriental.

NPA’s 6th Pulang Bagani Company and the Guerilla Front 18 Subregional Operation Command took him as a prisoner of war. Mrs. Rupinta had long worried that his health condition would get worse as he has been suffering from arthritis and an enlarged heart.

In an interview hours before the release, Mrs. Rupinta told Davao Today that she would ask her spouse for 21 years quit work, citing health reasons.

“We want him to retire,” she said.

Should Rupinta decides to leave public service, though, this would mean he would be 5 years early from being eligible from receiving the maximum monthly government pension.

Under the Government Insurance System’s policy, only members who are 52 years old can avail of their retirement benefits, although those have been in government service for at least 35 years are eligible for it.

Reporters present in Rupinta’s release tried to ask what his plans after, but the police officer wasn’t in his good condition, with his family requesting to leave immediately after the event.

Rupinta will not be returning home yet as he will have to undergo government debriefing. (davaotoday.com)