From Bhutan to PH: DENR to use ‘Gross National Happiness’ as new prosperity indicator 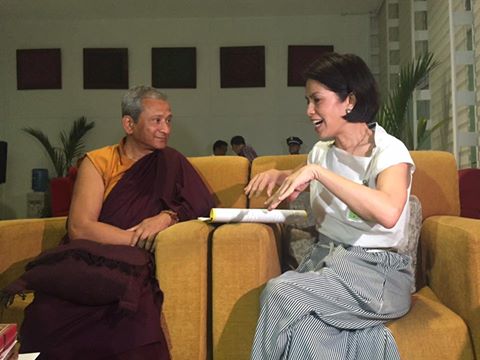 DAVAO CITY, Philippines — The country Bhutan measures its economic prosperity by appraising the happiness level of its citizen, not the gross domestic product.

This idea has attracted the interest of the Department of Environment and Natural Resources to adopt “Gross National Happiness” as a key economic development indicator for its community programs.

DENR Secretary Gina Lopez said the agency will use GNH as the new paradigm of development to make happiness as a “barometer” of development in DENR programs.

Lopez’s took inspiration from Saamdu Chetri, the head of of Bhutan’s Gross National Happiness (GNH) Center who was invited to speak at the Ateneo de Davao University on Tuesday for a lecture series about sustainable area development and management.

Chetri said that GNH is a new approach towards development which measures prosperity, spiritual, physical, social, and environmental health of the citizen and their natural environment.

In 1971, Bhutan rejected GDP as an indicator to measure progress and operationalized GNH as a new approach to development.

GNH measures prosperity by looking into the spiritual, physical, social and environmental health of its citizens and natural environment.

For Lopez, DENR wanted to apply some of Bhutan’s pro-environment project such as the carbon negative project.

“DENR likes carbon negative, since it is for the environment and they are the only one in the world,” she said.

Lopez said with GNH, they will know how to work on each community based from the positive response on a particular project.

“GNH will find a balance between materialistic and non-materialistic aspects of life, and other factors that are vital to human happiness,” said Lopez.

Lopez added that she wanted a more human development approach with GNH rather than a material approach in creating DENR programs.

DENR envisions the country as a land whose citizens value more the environment while pursuing economic development.

“Just like in Bhutan, they have zero crime, very little poverty, zero drugs, free health, free education and a lot of money, when in fact their goal is not money,” she said.

Meanwhile, Lopez urged the participants who came from 10 provinces across Mindanao to create proposals on environment which the agency would fund.

Lopez said that she is eyeing projects like bamboo, mangrove and marine programs with an initial fund of P18 billion.

She said that Mindanao will get the highest investment of the fund and is eyeing for 29 areas. (davaotoday.com)