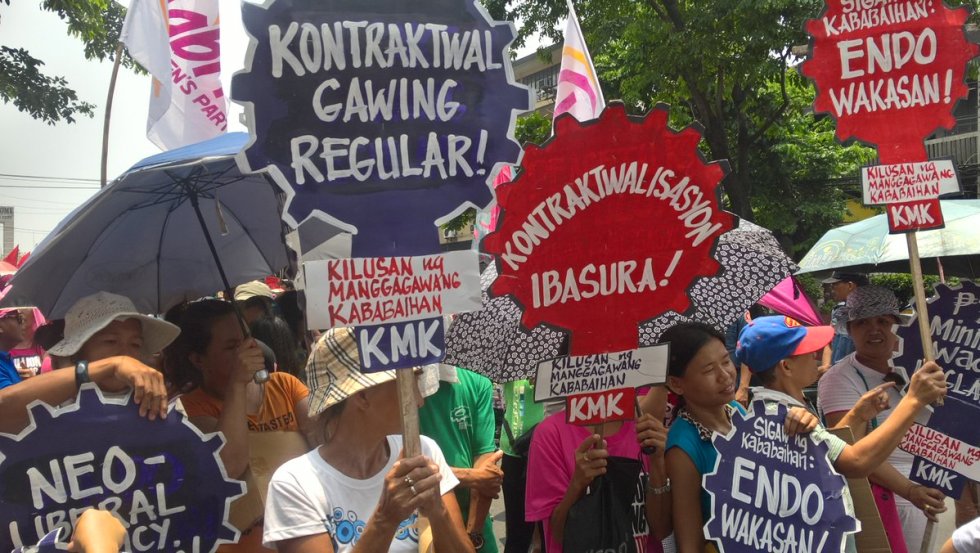 Gabriela Secretary General Joms Salvador said the country’s present ranking is indicative that gender gap is widening because it reflects “the desperate status” of women under the Duterte administration.

This year the Philippines ranked no. 21 from last year’s 7th place, a drastic slip in terms in terms of wage equality.

This year’s WEF report blamed the drop on the worsened wage difference between men and women not solely because of gendered salary differences, but because women are forced to render more unpaid or part-time work than men.

“The bulk of women occupy lower-paid positions and are less likely to be in highly-paid senior roles in companies. For every P100 men earn, Pinays take home only P76 for the same work,” Salvador pointed out.

Salvador feared that in the coming years, the figures will slip further as the Duterte administration’s economic team “plunges the country into huge foreign debts and entry of foreign capital.”

Such as, she added, the recent agreement signed by President Rodrigo Duterte for free trade deals with the China-led Regional Cooperation Economic Partnership in the ASEAN summit which is to be concluded this month.

“The sneaky moves of President Duterte to harden the grip of ENDO or contractual employment system on women laborers are now being felt much more as Congress moves to enact the Compressed Work Week Law,” said Salvador.

She added that “many female factory hands rendering up to 1 hour of unpaid overtimes daily now may find giving their bosses 2 to 3 extra hours trying to keep their precarious hold on temporary jobs.”

Apart from the prevailing job contractualization, the Gabriela spokesperson also blamed the country’s free fall of Health and Survival indicator ranking to a dismal 36th this year as a result of the Arroyo and Arroyo and Aquino administration’s privatization of public hospitals for the poor while the Duterte administration implemented a budget reductions and health workers’ pay cuts.

A more critical assessment by the United Nations Development Program (UNDP) using the Gender Inequality Index puts the Philippines lagging even farther behind with a ranking of 96 out of 188 countries due to the country’s stubbornly high maternal mortality of 114 deaths per 100,000 live births, according to Gabriela.

Overall, the WEF 2017 index showed that the economic pillar has one of the fastest-growing gaps which looks at workforce participation, leadership and salaries. The report further shows that women across the world are still, on average, earning less than men by a large amount.