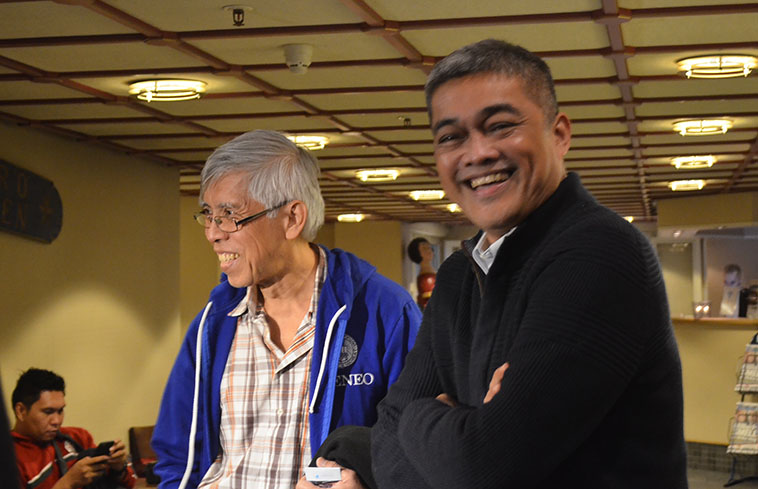 Officials of the reciprocal working committees on social and economic reforms Alan Jazmines for the National Democratic Front (left) and former agrarian reform secretary Hernani Braganza for the government greet each other on the arrival of NDF consultants at the venue of the second round of talks in Holmenfjord Hotell in Asker, Norway on Wednesday, October 5. The RWC on CASER agreed on a common outline which is regarded as an initial victory of the peace talks. (Zea Io Ming C. Capistrano/davaotoday.com)

ASKER, Norway — The Philippine government and National Democratic Front (NDF) panel members hammered out a final outline for social and economic reforms, which may be implemented even prior to a final peace agreement is inked between the two parties.

At the close of the 3rd day of the ongoing peace negotiations at the Holmenfjord Hotell here, Alan Jazmines, vice-chairperson of the NDF’s reciprocal working committee on CASER or the comprehensive agreement on social and economic reforms, said “(A)fter a couple more of editing sessions, the two negotiating panels on CASER agreed to a final outline on a comprehensive CASER proposal.”

“The NDF’s lengthy and comprehensive draft seeks to address the roots of the long sufferings of the mass of the Filipino people and relatedly the long-standing armed conflict in the country,” said Jazmines adding it’s an indication of “initial success in the start of the CASER negotiations.”

GRP panel head and Labor Secretary Silvestre Bello III said even while the Philippine government and NDF are on negotiation stage, “reforms may already be implemented as a result of agreements on topics such as agrarian reform and national industrialization.”

“We need not wait for the conclusion of a final peace agreement before Filipinos enjoy the fruits of concurrent peace negotiations,” he said.

The reciprocal working committee on the CASER agreed to fulfill their commitment to complete the work within a period of six to nine months.

Jazminez said the NDF made efforts to incorporate the GRP panel’s nine-point outcomes to their CASER draft.

On Friday, the reciprocal working committee on the social and economic reforms took a half day break as both parties differed in outlines.

The NDF prepared its draft 18 years ago, according to Dan Borjal, NDFP panel spokesperson in a press briefing here Saturday, October 8.