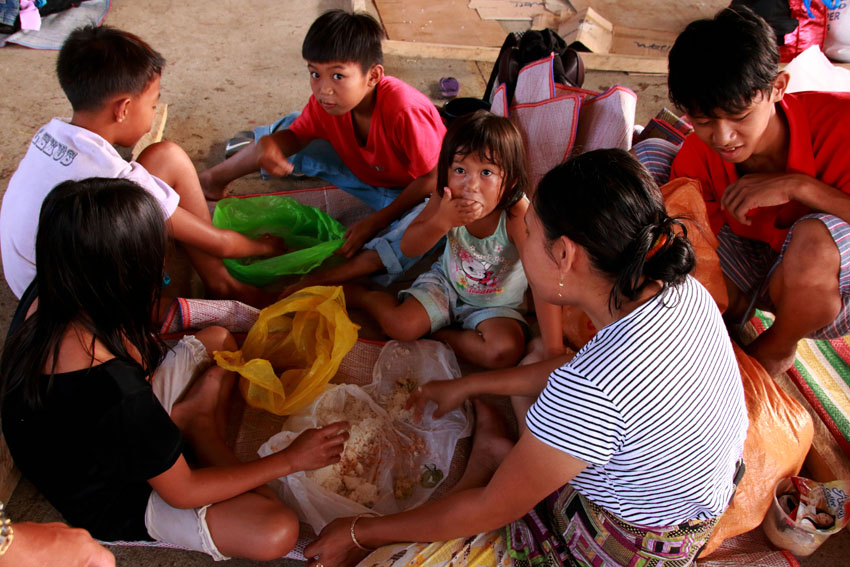 AWAY FROM HOME. At the evacuation center, families will have to go through the daily discomforts, far from what they used to live in their homes and communities. (Alex D. Lopez/davaotoday.com photo)

DAVAO CITY, Philippines — A total of P84 million worth of assistance was provided by government agencies to 66,738 families or 324,406 individuals displaced from the besieged Marawi City, an official said on Thursday.

Jalad said that remaining 95 percent has sought refuge with relatives and friends. He said that the activation of command and coordinating center in Iligan City was already activated in order “to fast track the government’s efforts in responding to the immediate needs of the displaced families.”

“If the number of IDPs increase in the coming days, the government is set to put up tent cities to accommodate more evacuees, he said.

When asked about the government’s rehabilitation plan for Marawi City, Jalad pointed out that the government’s focus at the moment is “to ensure the immediate delivery of services to Filipinos staying in the evacuation centers as well as to the home-based IDPs.”

“We are still in the response phase… But still the OCD as the overall coordinator will be involved in the crafting of the rehabilitation plan, initially through the conduct of post-conflict needs assessment,” Jalad said.

“Hopefully, as soon as Marawi is cleared, we can embark on the conduct of the assessment. And after the assessment will be the drafting of the rehabilitation and recovery plan,” he added.

Meanwhile, Presidential Spokesperson Ernesto Abella earlier confirmed that President Rodrigo Duterte will issue an executive order for the implementation of a rehabilitation program for Marawi City, awaiting the President’s signature.

The executive order for “Bangon Marawi” seeks to allot a P10-billion budget for the restoration of the conflict-torn city.(davaotoday.com)