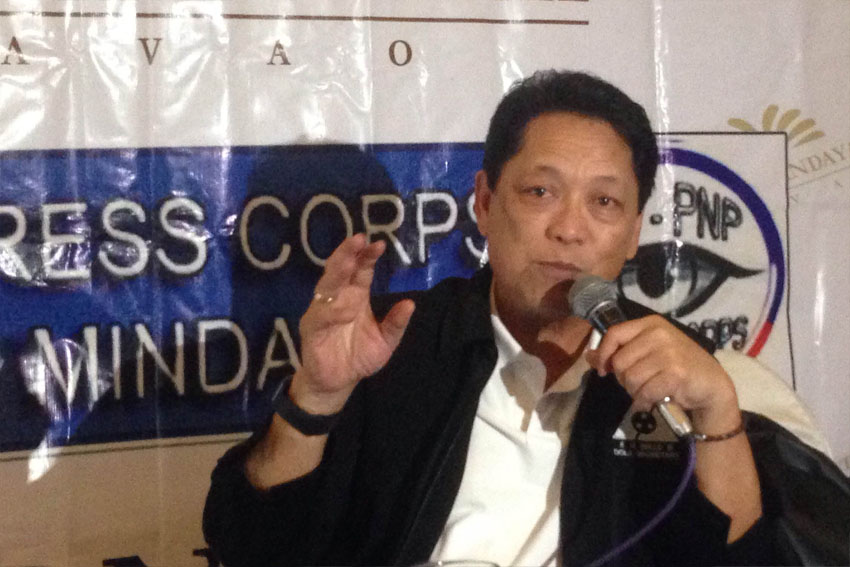 GRP negotiating panel chair and Labor Secretary Silvestre Bello III announces in a press conference in Davao City on Wednesday, Nov. 30 that there will be 50 to 70 political detainees to be freed before December 10. (Zea Io Ming C. Capistrano/davaotoday.com)

DAVAO CITY, Philippines — Government chief negotiator Silvestre Bello III vowed to release some 50-70 political prisoners before the international human rights day on December 10, as he extended his condolences to the family of Bernabe Ocasla, one of the 400 political prisoners who recently died of a heart attack.

In a press conference at the Royal Mandaya Hotel here Wednesday, Bello said Ocasla’s death is a “sad development.”

“We would have wanted to have allowed him freedom before namatay siya, pero ito ang nangyari, so what we can only do is to extend our sympathies to them and the family,” Bello said.

Progressive organizations said the government is accountable for Ocasla’s death. The Samahan ng mga Ex-Detainees Laban sa Detensyon at Aresto, said Ocasla should have been released along with more than a hundred ailing political prisoners as soon as President Rodrigo Duterte assumed office.

Fr. Dionito Cabillas, SELDA spokesperson said Ocasla’s death is “the tragic result of the government’s deliberate delays and excuses in the release of political prisoners.”

However, the government official said the release of the political prisoners still needs to undergo judicial process.

“Kung yung pagpapalaya ay nasa Presidente lang, andali-dali sabihin yan, palayain mo na yan, and I’m sure he will in his power. Kaya lang may proseso yan eh, judicial process na dadaan sa husgado which take some time (If the release of the prisoners would only require the President’s order, it is easy to say ‘release them’, and I’m sure he will in his power. However, there is a judicial process which needs to pass through the court which take some time),” Bello said.

He said he keeps telling National Democratic Front of the Philippines peace panel negotiator Fidel Agcaoili to “be patient because we have to undergo a process.”

“The desire and the will of the president to release some of your political prisoners is there, hindi nakakalimutan ng ating pangulo yun (the President does not forget about it),” he said.

50-70 detainees to be released

Bello also said that the government will possibly release around 50 to 70 political prisoners, including five to seven NDF consultants before December 10.

“Maybe before December 10 we will have the release of about 50-70 detainees on humanitarian grounds. There are also five to seven consultants to be released by pardon because they are consultants in the peace process,” said Bello.

But for Health Action for Human Rights, Ocasla’s death should be the last under the Duterte administration.

Dr. Geneve R. Reyes of the HAHR said Ocasla complained of constant headaches, episodes of blurring of vision and high blood pressure during his detention at the Jose Reyes Memorial Medical Center.

The 66-year old prisoner spent nine years in prison for charges of multiple murder. He died on Monday afternoon after three days in comatose.

“Although the slow justice system in the country would render anyone in his situation hopeless, he and many detainees found hope in President Duterte’s promise of releasing political prisoners and pursuing the peace talks with the NDFP,” Reyes said.

Reyes added: “The death of Ocasla, though the first under his administration, should also be the last.”

Bello said the third round of peace talks would resume on January 18 to 25 in Rome, Italy. (davaotoday.com)