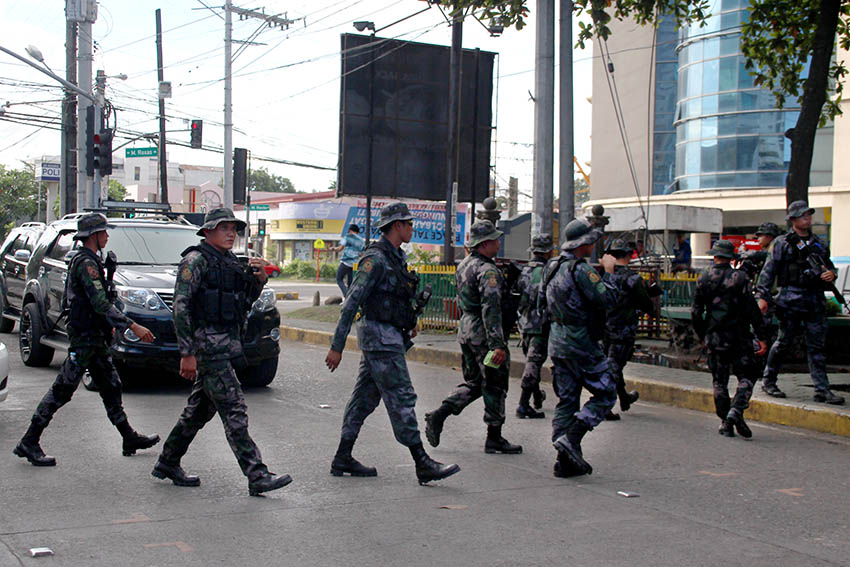 Scores of police officers in full combat gear patrol along Roxas Avenue in Davao City on the first day of Martial Law in Mindanao on Wednesday, May 24. President Rodrigo Duterte, through Presidential Spokesperson Ernesto Abella announced the declaration on Tuesday evening after a series of clashes erupted between government troops and members of the Maute in Marawi City. (Paulo C. Rizal/davaotoday.com)

The local chief executive presented the guidelines in a media briefing on Wednesday as she pointed out that the city is on heightened alert to “prevent violence” following the skirmishes between the government troops and Maute group in Marawi City, Lanao del Sur.

“To Dabawenyos, it’s the same. Use prudence in planning your activities. Since we are under Martial Law, my suggestion is if you do not have important things to do outside of your residences, you just stay home,” she said.

The presidential daughter has discouraged people from travelling to and from Davao City as she ordered stricter inspections in various checkpoints spread in the city.

“In a state of Martial Law, warrantless arrests, curfew, monitoring of the people’s activities, suspension of the writ of habeas corpus are attached,” Duterte-Carpio said.

She advised Dabawenyos to stay inside their homes and avoid loitering at night. She also appealed to the general public to cooperate and subject themselves to security measures being implemented.

Below are the 30-point guidelines issued by the city government.

1. A “Hold and Secure” method will be implemented in ensuring the security of our people.

2. Call 911 immediately to report suspicious-looking persons, materials and actions by group of persons.

3. Exercise prudence in planning your activities.

4. Travel to and from Davao City is discouraged, as well as in other places in Mindanao, unless there is an urgent matter that needs to be attended to.

5. Do not leave your residence if you do not have business or matters to attend outside.

6. Travelling via motorcycle convoys is discouraged.

9. All rallies and large-group activities should have permits from the local government.

10. Ensure that you have updated vehicle registration papers, and driver’s licenses.

11. Ensure that you have valid and existing licenses for your guns [License to Own and Posses Firearm (“LTOPF”) and Permit to Carry (“PTC”)].

12. Cooperate with the AFP and PNP personnel conducting checkpoints.

13. Familiarize yourself with the contents of your own baggage. Do not accept baggage from strangers.

14. In the conduct of checkpoints, turn off your headlights and turn on your overhead lights during inspection. 15. Allow the inspectors to smoothly make the inspections.

17. Minors are extremely discouraged from going out of their residences except when accompanied by adults. 18. Avoid going out late at night and consuming excessive alcohol.

19. Buddy system is encouraged to those who work at night especially during travel to and from work.

20. We encourage that you conduct your personal activities in the daytime.

21. Loitering in all areas is discouraged.

22. Do not leave bags and other personal belongings unattended.

23. Do not leave your cars unattended for a long time.

24. Do not retain large sums of money in your residences.

25. Business establishments and schools are required to create emergency plans for their respective premises.

27. Do not retain large sums of money in your premises.

29. Tourists are discouraged from going to areas that are not included among the main tourism areas of the city.

30. Always bring with you your passports and other proofs of identification.

Earlier, Duterte-Carpio implemented a “lockdown” protocol but was lifted later as the city is now on a “hold and secure” situation.