DAVAO CITY, Philippines – The drill began on 10am of October 14. Twenty-five “persons disguised as terrorists” were scattered across 200 establishments in the city. The public and personnel of establishments were briefed earlier to spot the “suspects”, all identically dressed, and report to a mobile number.

During the next five hours, authorities announced that 19 “suspects” were “neutralized”, as they were spotted by personnel in five malls, three government offices, City Hall, Sangguniang Panglungsod, hotels, churches and other locations. The remaining six were “neutralized” during the few more hours.

The drill was part of the Davao City government and Task Force Davao’s anti-terror simulation “community exercise” to beef up what they call the “culture of security” for the city.

The byword was first announced by Mayor Sara Duterte-Carpio late in August when news of the Jolo bombing alerted the public.

In a government press release, Mayor Duterte-Carpio stressed the local government is “boosting its security and anti-terrorism initiatives through the “culture of security” campaign to encourage Dabawenyos to adopt vigilance in their way of life.”

Community as ‘first line of defense’

The Task Force Davao was reported to have formulated the culture of security last April with calls to the public to volunteer for inspections, report suspicious persons, remind others of anti-terrorism policies of the city, and participate in community defense systems.

Davao City was rocked by bombings in recent years. In 2003, the old Davao International Airport in Sasa and the Sasa Wharf were bombed a month apart of each other, killing 38 people and injuring 200. Investigators charged some Moro people for the airport bombing but the case was dropped for lack of evidence and questionable methods of the arrest.

The bombings led to the creation of Task Force Davao, a composite of army personnel tasked to patrol the city’s borders and downtown areas.

Two other bombings happened after 2003, the Ecoland bus terminal bombed on February 14, 2005 killing a child vendor, and the Roxas Night Market bombing on September 2, 2016 that killed 15 and injured 69.

Task Force Davao commander Colonel Consolito Yecla said in an earlier interview that the “culture” intents to make the community the “first line of defense” in the fight against terror.

With this recent community exercise, Yecla said in another interview that this showed “a robust security system in Davao City based on the support and cooperation of all Davaoeños.”

The staging of the community exercise, however, was met with concern. When the local government made the announcement regarding this drill through its Facebook Page a week ago, the post generated 899 comments.

A common reaction among netizens is that of questioning the timing of the exercise amidst the public’s fear of the Covid-19 pandemic and its effect of business slowdown.

“Appreciate the effort, but with everything that is happening with Covid, slump in business sales, this is too much. People will just get more scared than feel safe. We just want our lives to move on,” one netizen posted. 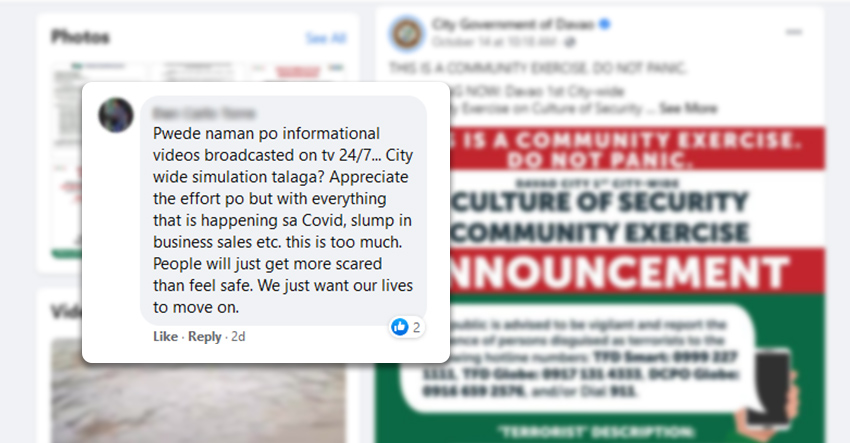 Another common reaction was concern that persons with health issues like heart problems might be affected if they are unaware of the drill and inadvertently witness or become part of it.

Few netizens also point out that the exercise does not simulate an actual threat because the public was briefed beforehand. 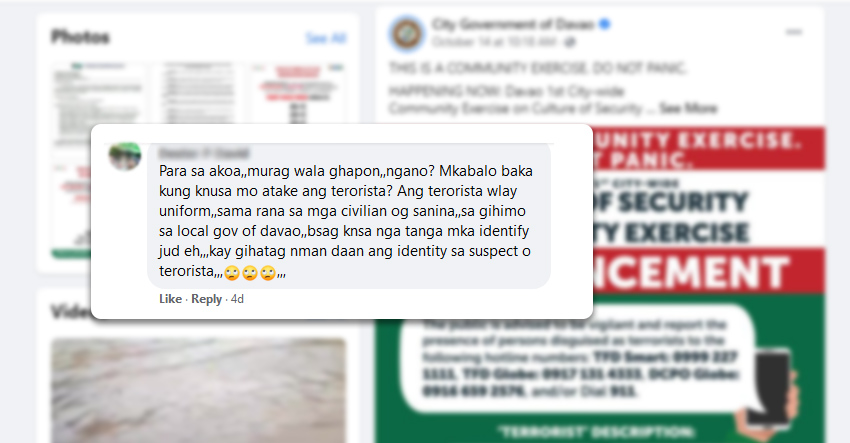 What about funds for the poor?

Government critics, however, question the need to have this “culture”.

Karapatan Southern Mindanao secretary-general Jay Apiag said operationalizing the “culture of security” and the recent community exercise entails a big budget that could have been used more for economic concerns of the people in this pandemic.

“We bring (their) attention to instead channel its funds for the poor communities who are grappling in the dark on how to sustain their food on their tables brought about by the pandemic, and the current threat of natural calamities in the metro which needs prompt attention from the authorities and concerned offices. Not to mention those Covid-19 patients who are still needing financial and essential support,” Apiag said.

Cases of Covid-19 in Davao City continue to rise after the six-week lockdown last May, with 3,002 cases as of October 23.

For Dr. Jean Lindo, a health advocate and chair of the women’s group Gabriela Davao, the culture becomes problematic in this time when activists are being red-tagged and terror-tagged by the government, the military, and trolls.

Lindo spoke from experience, as she and other Davao-based rights advocates including a bishop were tagged by an anonymous poster as terrorists.

“This so-called culture can be weaponized against dissenters. Isn’t it a danger this can turn into witch hunting?” asks Lindo. “If you’re an activist, and you go to the mall and people will target you?”

Political observer and school teacher Christian Espinoza points out how the local government is conditioning the public of “a new norm where people would think of terorista or adik. It creates an enabling environment for such while also creating a false sense of security for the public,” he said.

“Security should be viewed comprehensively,” he points out, “job security, food security, social security, and not just the dimension of physical and military security.”

Espinoza said the Davao City public is more concerned about surviving the times with the recent re-impositions of curfew and penalties for violating the city’s health protocols. (davaotoday.com)