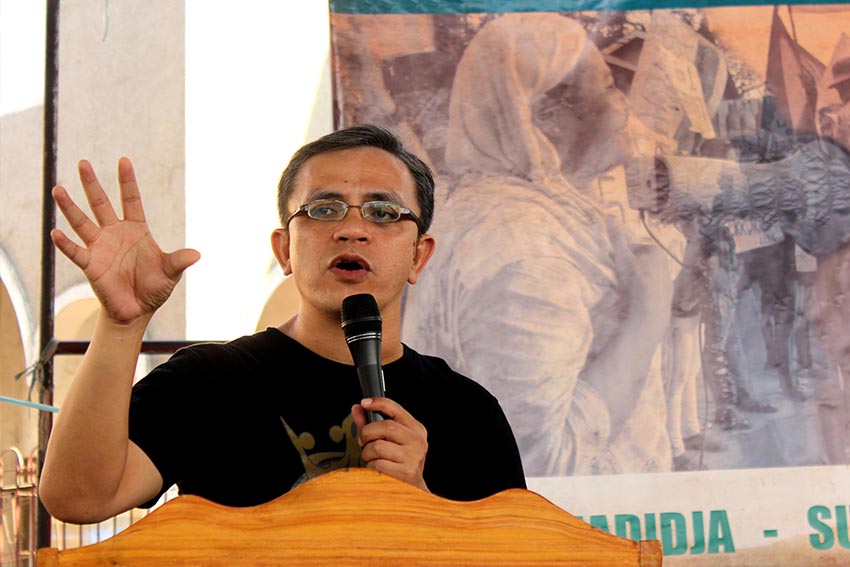 Former Bayan Muna Rep. Joel Virador passed away on May 7 due to cancer. He was 52. (davaotoday.com photo by Medel V. Hernani)

He succumbed to thyroid cancer while admitted at the Brokenshire Memorial Hospital in Davao City.

Virador was the representative of Bayan Muna in the 13th Congress from 2004 to 2007. He was also the Executive Vice President of the party-list.

In 2006, authorities charged Virador, together with other Makabayan congressmen Teddy Casiño and Satur Ocampo of Bayan Muna, Gabriela Representative Liza Maza, and Rafael Mariano and late Crispin Beltran of Anakpawis for rebellion due to their opposition to the Arroyo government.

They were known collectively then as the Batasan 6. The Supreme Court, in June 2007, dismissed the rebellion cases against them.

Before he assumed his post as the representative of Bayan Muna, Virador was a human rights activist and formerly served as the secretary-general of Karapatan Southern Mindanao Region.

Bayan Muna Rep. Karlos Zarate told Davao Today that Virador’s death is a big loss for them and the people’s movement, especially in Mindanao.

“He was a proud, honored to become an activist waging collective struggles and campaigns for the good of our country and people since his student days until he took a leave due to a lingering sickness,” Zarate said.

He described Virador as “a true nationalist, respected, and selfless mass leader, as well as a fearless human rights defender and competent legislator.”

“Truly worthy of emulation, he will be missed but will never be forgotten as a friend and a dear ‘kauban’,” Zarate added.

The Kilusang Mayo Uno (KMU) Southern Mindanao Region also mourned the death of Virador, who was the Regional Chair for Federation Affairs of the labor group since 2015.

“Farewell Ka Joel “JV” Virador, with our inexplicable grief yet unbounded gratitude. We were witness to your brilliance, militancy, humility, energy, good-naturedness, and selflessness. You were warm and gentle to the poor but ferocious to those that oppressed them,” KMU said in a statement.

“You championed the interests of the working class in the streets and in the negotiating table. You commanded respect from both sides. Your contributions to the trade union movement will never be forgotten,” the group added.

His wake will be at the Cosmopolitan Funeral Homes in Torres St. Davao City tonight. Tomorrow, May 8, a tribute will be held at Iglesia Filipina Independiente (IFI) church.

Virador’s family will transfer his remains to his home in Makilala, North Cotabato on Thursday. (davaotoday.com)