Human Rights and the Quest for Justice: Arroyo’s ‘War Crimes’ 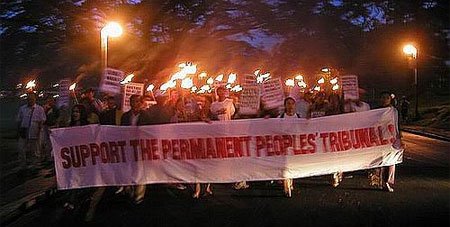 In this analysis piece, the Policy Study, Publication and Advocacy (PSPA) Program of the Center for People Empowerment in Governance (CenPEG) analyzes the recent filing of human-rights charges against President Gloria Macapagal-Arroyo before the Permanent Peoples’ Tribunal in the Netherlands. The Philippines, the center says, “is a country where seeking justice leads to further injustice, where the culture of impunity is aggravated by a culture of fear and defenselessness, where a corrupt and lawless government in all its brazenness invokes the ‘rule of law’ to justify assaults on democratic rights and civil liberties.”

MANILA — Families of victims of extra-judicial executions and other crimes filed Oct. 30 charges of systematic and gross human rights violations against President Gloria M. Arroyo before the Permanent People’s Tribunal (PPT) in Den Haag, The Netherlands. The unprecedented move indicates two major trends in the human rights struggle in the Philippines. One is that the country’s legal system has lost all its credibility forcing victims of political persecution to seek justice through other legal mechanisms accessible in the international community. The other is that the struggle for human rights, which was born during the Marcos dictatorship, has once again been cast into the global limelight as part of the people’s overall struggle for comprehensive social and political reform.

The complaints were filed by Hustisya, the organization of families of victims of politically-motivated crimes under the Arroyo administration; SELDA and other groups during the PPT’s Second Session on the Philippines. The second session is being held in response to an urgent appeal from the victims of violations of human rights and people’s rights seeking justice and redress.

President George W. Bush, Jr. is also a subject of the indictment for supporting Arroyo’s counter-insurgency-terrorism through military aid and training, among others. The support, as alleged in the indictment, has led to the escalation of the political persecution of persons and groups tagged as “enemies of the state” that have called for the removal of Mrs. Arroyo from the presidency, among others.

Mrs. Arroyo is the second Philippine president to be indicted before the PPT. In 1980, then President Ferdinand Marcos, together with the U.S. government and other co-conspirators, was found guilty for violations of people’s rights, human rights and crimes under international law.

Based on the latest news accounts, no relative of victims of human rights violations has approached the Melo Commission, the fact-finding body formed by the President on Aug. 21 to investigate the killings and forced disappearances of activists since 2001. The commission, headed by a former associate justice of the Supreme Court (SC), has been widely criticized as just a panel without any legal teeth and whose only function is to clear Mrs. Arroyo of any responsibility in the alleged crimes.

Using her political clout in Congress, the President has also thrown out two impeachment complaints in 2005 and this year which include charges of human rights violations. By junking the impeachment complaints, Mrs. Arroyo closed the doors to the public clamor for her to tell the truth and what she knows about the 2004 electoral fraud and her role in the extra-judicial killings. To date, there have been 764 victims of extra-judicial executions and 186 victims of forced disappearances.

In seeking justice before an international court, any victim of human rights violations should have exhausted all available legal remedies in his or her own country. Indeed, lawyers and rights watchdogs attest to the fact that in many cases government’s investigative bodies, including the national police and National Bureau of Investigation (NBI), have either done no serious investigation or were seen to be covering up for the alleged perpetrators, widely believed to be military, paramilitary and, in some cases, police forces. The Philippine National Police’s (PNP) Task Force Usig, which was tasked to investigate the killings, lacks credibility for two reasons: first, its own investigation was based mainly on media reports, which normally cannot stand in court; and second, it has consistently shown a prejudgment that the killings are part of the Left’s internal purge.

Families of the victims have stopped filing complaints with the Department of Justice (DoJ) because of precedents where, despite preponderant evidences and testimonies, initial charges had been summarily dismissed. The DoJ itself is sitting on about 400 cases already submitted by the Commission on Human Rights (CHR) for prosecution. The department has shown it cannot be relied upon to prosecute the alleged perpetrators of the killings with the justice secretary himself perfunctorily dismissing the incidents of human rights violations as a mere collateral damage of government’s counter-insurgency program.

There are doubts that the country’s entire judicial system can give legal relief let alone a fair trial for a rebel, political dissenter or activist. Marcos-vintage PDs including recent SC rulings uphold warrantless arrests and criminalize political offenses. It would be a naivete to expect judges to know the rudiments and nuances of international law and other human rights instruments “which are supposed to be part of the law of the country” as to enable them to rule on alleged political offenses based on such instruments.

Except for partisan political purposes, the Congress “through its Commission on Appointments (CA)” does not seriously scrutinize cabinet appointees including generals deemed unfit for their positions in accordance with its check-and-balance constitutional role. One proof is the case of Jovito Palparan, tagged as the “butcher” of activists, whose successive promotions including the rank of major general passed the CA. Likewise, Congress should be cited for earmarking fat budgets to the Armed Forces of the Philippines (AFP) despite its poor human rights record. Thus Congress has reneged on its responsibility to ensure that executive policies and other fiats are consistent with the people’s democratic interest and that their right to dissent is adequately protected.

This is a country where seeking justice leads to further injustice, where the culture of impunity is aggravated by a culture of fear and defenselessness, where a corrupt and lawless government in all its brazenness invokes the �rule of law� to justify assaults on democratic rights and civil liberties.

Given the current circumstances, the quest for justice has been raised to the international forum that remains open to the families of victims of political murders in the Philippines. There is no mistaking about the criticalness of this effort given the logistics and other resources that should be mustered in bringing the case before the international community.

Before the United Nations Human Rights Council (UNHRC) last September, people�s organizations filed on behalf of the victims of political persecution complaints of human rights violations against Mrs. Arroyo. In dealing with the complaints, the Council through its appropriate committees is expected to investigate the alleged crimes and determine whether the Philippine government has failed to comply with its obligations to international laws, conventions and other instruments. Non-compliance with international law particularly the convention of human, civil and political rights and other instruments can lead to the forfeiture of the Arroyo government�s seat in the 47-member UNHRC.

On the other hand, the PPT is composed of eminent persons and jurors from all over the world. Although it is not a judicial body with a power to punish, the prestigious PPT is a forum where a conviction can help mobilize a strong international condemnation and even pressure against those found guilty. This act can serve as a signal to world institutions that the quest for justice by victims of human rights violations in the Philippines is the responsibility of the international community as well. This can serve further as political ammunition in the continuing struggle in the Philippines for the removal of a discredited and repressive administration. In the end, all these can only imply that the struggle for human rights can serve the goals of political reform, such as changing a government, however short-term this may be.