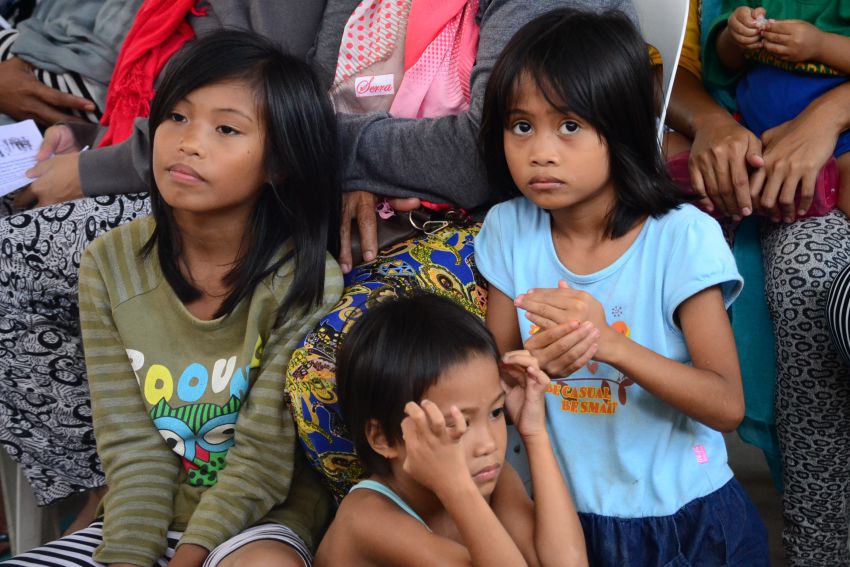 DISPLACED CHILDREN. Children patiently wait for their parents as they attend the ‘Duyog Ramadan’ held at the Mini-Forest gym in Davao City. About 429 families of Moro evacuees call on the government troops to stop aerial bombings in Marawi, June 16. (Robby Joy D. Salveron/davaotoday.com)

DAVAO CITY, Philippines – About 400 individuals from Marawi City and other neighboring cities have evacuated here in the city as Marawi crisis continues.

Kagawad Maisu Manding of Barangay 23-C, Quezon Boulevard here in the city told Davao Today that as of yesterday, June 15, they have recorded a total of 435 individuals considered as ‘home-based evacuees’ in the barangay alone.
“They are staying with their relatives here in the city. Not in evacuation centers,” Manding said.

Normala M. Sultan, 26, a resident from Marawi said in an interview that she came to the city last June 1, along with her husband, four children and her sister-in-law’s family. They quickly fled from Marawi City the day the war erupted.

From Ramain, Lanao del Sur, Sultan said they rode a truck filled with other evacuees to come here in the city. Her family and three other families are currently staying in her cousin’s house.

Sultan added that they are traumatized by the war and said that they feel scared and alarmed whenever they hear noises that sound like gunshots.

Asmin Itum Sultan, 27, Normala’s sister-in-law, also said that they are having a hard time in staying here in the city since they don’t have any work here.

Earlier, Davao City Deputy Mayor for the Maranao Tribe Randy Usman said that they are still expecting more evacuees to come here in the city. Usman said that evacuees are interviewed by barangay officials one by one for profile purposes and to ensure that no terrorists will be able to enter the city.

“We will be coordinating with the City Mayor’s Office to help cater the coming evacuees,” Usman said.

In earlier’s interfaith forum-discussion, the DSWD XI and other partylists distributed relief goods to the evacuees. Usman said that aside from food, evacuees are also in need of hygiene kits.

Usman along with the other Moro leaders and evacuees also called out to the government and military forces to stop aerial bombings in Marawi. (davaotoday.com)