Inclusion of AFP, revival of PHL Constabulary for war on drugs hit 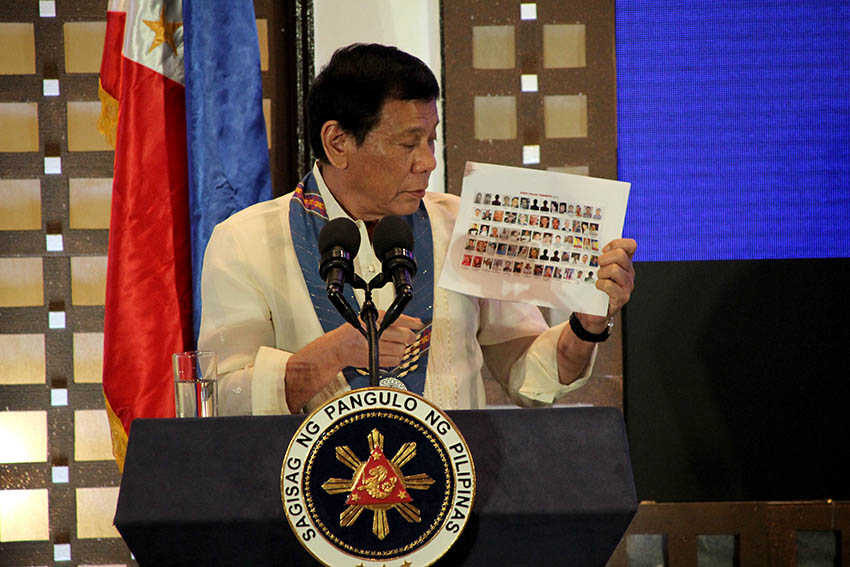 President Rodrigo Duterte shows his thick printout of personalities allegedly involved in the illegal drug trade in the country during a speech in the installation of officers and board of trustees of the Davao City Chamber of Commerce and Industry, Inc. on Jan. 14 at the Marco Polo Hotel. He showed the same list during his speech at the 38th National Convention of the Philippine Association of Water Districts at the SMX Convention Center in Davao on Thursday, Feb. 2, 2017.(Paulo C. Rizal/davaotoday.com)

DAVAO CITY, Philippines— Human rights group ​criticized​ ​President Rodrigo Duterte ​for​ ​includ​ing​ the military and reviv​ing​ the Philippine Constabulary ​on​ ​the war on illegal drugs, saying that it would result to more human rights violations.

“Fully integrating the Armed Forces of the Philippines (AFP) into the already bloody war on drugs will be a chilling amalgamation of the said campaign to the military’s counter-insurgency and anti-people objectives,”

“This will inevitably result to further fascist attacks and human rights violations against the people, including organized communities and movements.”

Phelim Kine, HRW deputy director in Asia said there is also a “deeply-rooted culture of impunity for military abuses in the Philippines.”

Kine said only one soldier has been convicted of an extrajudicial killing since 2001, citing a data from the Department of National Defense.

“The arrest in August 2014 of Jovito Palparan, a retired Army major general, marked a rare challenge to the impunity enjoyed by military personnel who commit serious crimes, and which multiple ​P​residential administrations have failed to adequately address,” he said.

The groups’ statement came as President Rodrigo Duterte ordered the AFP to take a frontline role in the anti-drug campaign in which more than 7,000 Filipinos have been killed.

Duterte stressed on Thursday his decision to include the Army in the war on drugs during his speech at the 38th National Convention of the Philippine Association of Water Districts here.

Duterte said he only trusts the PDEA and the AFP as policemen are involved in drug trade.

“I still have to write the proclamation… But I have taken in the AFP and raised the issue of drugs as a national security threat so that they can call the armed forces to assist,” he said.

“In the meantime, there will be a cleansing, a purge inside Crame and the (National Bureau of Investigation),” he said.

Palabay feared that this would only led to “systematic violation of the people’s right to due process and to life.”

“The thousands of suspected drug users and pushers and innocent citizens, even minors, killed in the course of the implementation of the campaign against illegal drugs are enough proof,” she said.

The human rights group also criticized the proposed revival of the Philippine Constabulary.

“Reviving an institution known to have butchered Filipinos during the US colonial rule and the Marcos dictatorship for the war on drugs will worsen the climate of impunity,” the group said.

Karapatan said the PC led in the “suppression of peasant uprisings and civil disobedience demonstrations of workers and peasants, during that period,” noting that PC, the forerunner of the AFP, was first organized by the US colonial government in 1901, the paramilitary force responsible for the warrantless arrests of known revolutionaries branded as bandits like Macario Sakay and Julian Montalan.

“During the Marcos dictatorship, the PC became the foremost implementer of counter-insurgency programs designed by the US following their military manuals used against millions in the US war against Vietnam. These programs resulted to thousands of victims of human rights abuses during Martial Law in the Philippines,” the group pointed out. (davaotoday.com)