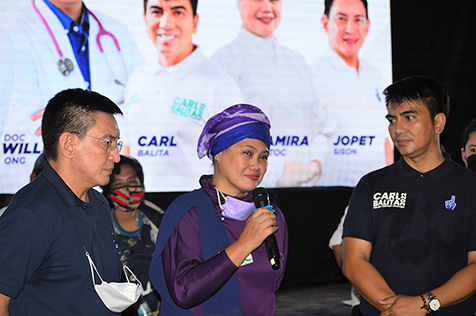 CAGAYAN DE ORO CITY – Senatorial hopefuls lined up with presidential aspirant Francisco “Isko” Domagoso urged critics to leave it to the Commission on Elections (Comelec) to decide on the tax evasion conviction of Ferdinand Marcos Jr.

All of Domagoso’s allies – Samira Gutoc-Tomawis, Joseph Peter Sison, and Dr. Carl Balita – agreed it is the Comelec that has the sole authority to decide the eligibility of Marco Jr. to run as a presidential candidate in 2022.

The three aspirants visited the Cogon public market here on Saturday, November 6, for a meet-and-greet with the city residents.

Domagoso and his running mate Dr. Willie Ong were not around during the visit, as the mayor was in Cebu for another engagement.

“The decision lies with the Comelec. The Comelec is the one going to investigate it. There are many opinions about that, some are saying that tax evasion does not involve moral turpitude,” Sison said.

“Whatever happens to the case, let Comelec decide, our focus right now is the people,” he added.

For her part, Gutoc-Tomawis wasn’t too kind to Marcos, saying that people should not forget what the Marcos family did during the Martial Law in the ‘70s and ‘80s.

“What I am pushing for is remembering, educating and caring for the entire Philippines, Mindanao should not forget the Martial Law in the 1970s,” Gutoc-Tomawis said.

“Marcos has the right to file his candidacy, but we will never forget,” she added.

It can be recalled that Marcos is facing several petitions for the cancellation of his certificate of candidacy at the Comelec on the basis of his two convictions on tax evasion.

Several groups filed petitions for the cancellation of Marcos’ COC based on a court ruling convicting him after failing to file his income tax return in 1997, made final in 2001.

The petition cited Marcos misrepresented upon claiming eligibility in running for the vice-president.

The CA did not impose a penalty of imprisonment, just P36,000 fines, so that removed the disqualification ground of having been sentenced to more than 18 months.

Gutoc-Tomawis also belies reports that Moreno is a Marcos supporter and an “enabler” of Pres. Rodrigo Duterte.

“It is very clear to me that I joined Aksyon, because ‘Yorme’ (Domagoso) is not a Marcos supporter,” Gutoc-Tomawis said.

Balita also left it for the Comelec to decide if to allow Marcos, Jr. to run.

“Let Comelec decide, but let the people also decide. We trust the Comelec, but we trust the Filipinos more,” Balita said.