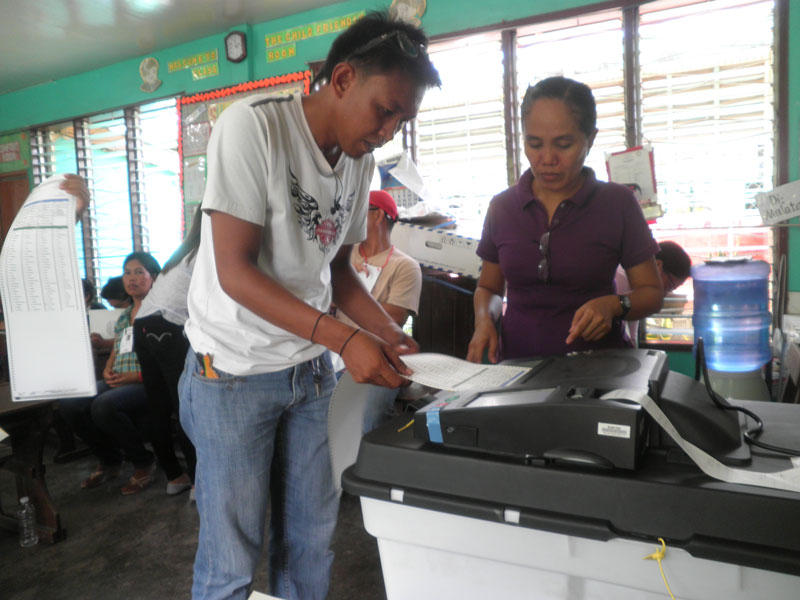 TRY & TRY. A voter in Panabo City attempts to feed the ballot to the PCOS machine five times, to no avail. (davaotoday.com photo by Mart D. Sambalud)

PANABO CITY, Davao del Norte, Philippines — Voters from San Francisco village, this city said their names were not in the voters list as posted outside the polling precincts in Panabo City Elementary School.

As of 2:30 PM Monday, voters trooped to the Voter’s Assistance Desk to check their names and polling precinct number.  However, they were surprised that their names were nowhere to be found in the computerized voter’s list from Panabo City Comelec Office.

Marivic Escudero, a voter from Purok Caymeto, complained that her name and seven others from her family were not on the voter’s list.

She added that 20 voters from their village also did not find their names and returned home disappointed.

Board of Election Inspector Chairman Margaret Laurel confirmed that voters in their cluster could not cast their votes because their names were not listed.  She added the Comelec-Panabo City instructed them to reject voters whose names were not enlisted in the EDCVL.

In Rizal Elementary School, voters have reported of paper jams in some of the clustered precincts.

Rodrigo Pangantihon, a PCOS Technical support staff, said this was due to some deformities of the ballots.  He added “(B)allots should not be crumpled and must be inserted properly to the PCOS.”  (Mart D. Sambalud/davaotoday.com)