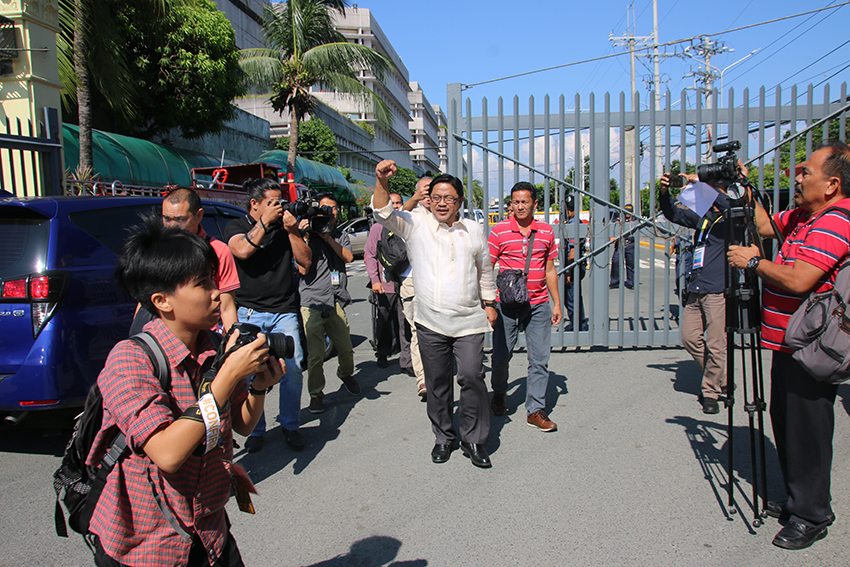 IN HIGH SPIRIT. Former DAR chief Rafael Mariano is in high spirit as he goes out of the premises of the Senate on Wednesday, Sept. 6. The Commission on Appointment rejected his confirmation. Mariano goes straight to the hundreds of peasant leaders and members who were conducting a rally alongside the hearing at the Senate. (Alex D. Lopez/davaotoday.com)

MANILA, Philippines – The Kilusang Magbubukid ng Pilipinas pointed at President Rodrigo Duterte as behind the rejection of the appointment of Rafael Mariano as secretary of the Department of Agrarian Reform.

“The marching order to reject Ka Paeng came directly from Malacañang and President Duterte,” the KMP said in its statement, adding that the rejection of Mariano also served as proof of Duterte favoring the landlords and oligarchs in the country.

“Duterte chose to throw away whatever reforms Mariano has started in DAR,” it said.

KMP also noted the endorsement made by Davao City Mayor Sara Duterte-Carpio to the resolutions of the Regional Peace and Order Council and Regional Development Council in Davao Region where the mayor’s signature appeared.

The KMP said: “Presidential daughter and Davao City Mayor Sara Duterte-Carpio is among the oppositors to Mariano’s confirmation because her husband Atty. Maneses Carpio, is a legal counsel of Lapanday Foods Corp. The landlord Lorenzo family and Lapanday are strongly contesting Mariano’s installation of 153 farmer-beneficiaries of the Madaum Agrarian Reform Beneficiaries Association Inc. (MARBAI) to the lands grabbed by Lapanday in Tagum City.”

Aside from Malacañang, other interests groups also joined the bandwagon in the work to oust Mariano from his post, to include what the KMP dubbed as the militarist cabinet members of the Duterte administration.

The said resolutions informed Senator Koko Pimentel, the chair of the powerful Commission on Appointments on the alleged participation of Mariano to the attack staged by New People’s Army rebels against the facilities of Lapanday Foods. 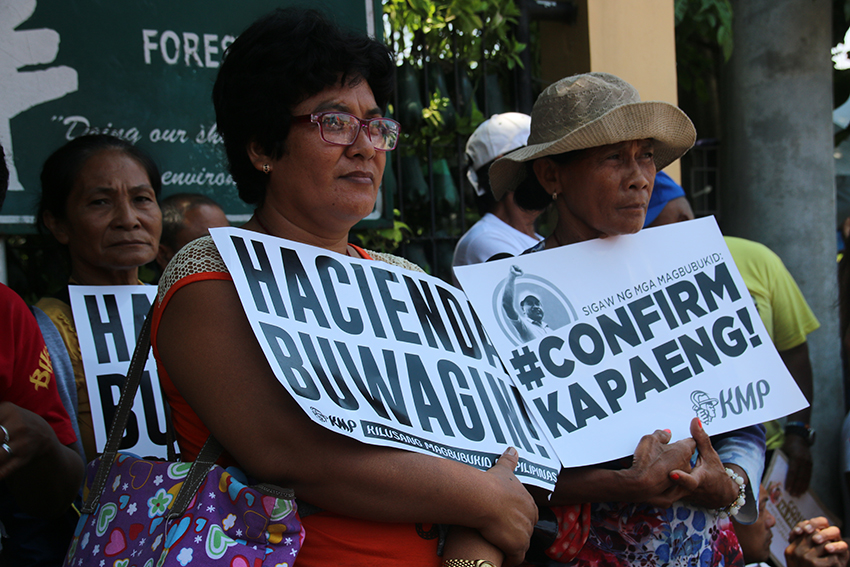 STAUNCH SUPPORTER. Two women leaders joined the hundreds of peasants and farmers who staged a rally outside the Senate on Wednesday, Sept. 6. where the members of the powerful Commission on Appointment rejected the appointment of DAR chief Rafael Mariano. (Alex D. Lopez/davaotoday.com)

“The allegations against Mariano as stipulated in said resolutions were based on fabricated intelligence reports by the police and the military. Fabricated reports, such as those used in said resolutions smack of a witch hunt that has been a feature of the Duterte government’s dirty and bloody counter-insurgency program,” the KMP pointed out.

Mariano’s rejection also showed the current leanings of the Duterte administration to pro-US and militarist policies with the intention to block the implementation of genuine socio-economic reforms, including the free land distribution and other pro-farmer programs inside the DAR that were advocated by Mariano.

“It is consistent with the Duterte government’s refusal to address the socio-economic demands of farmers, and is part of the AFP’s arsenal perpetuating the people’s suffering,” the group said.

In the same statement, KMP Secretary-General Antonio Flores said Mariano is being supported by the more than two million members of their organization, including their families.

“Ka Paeng Mariano has staunchly stood by his position against the conversion of agricultural lands, the very policy that the elite-dominated Congress of landlords and capitalists wants to pursue and perpetuate,” Flores added. (davaotoday.com)