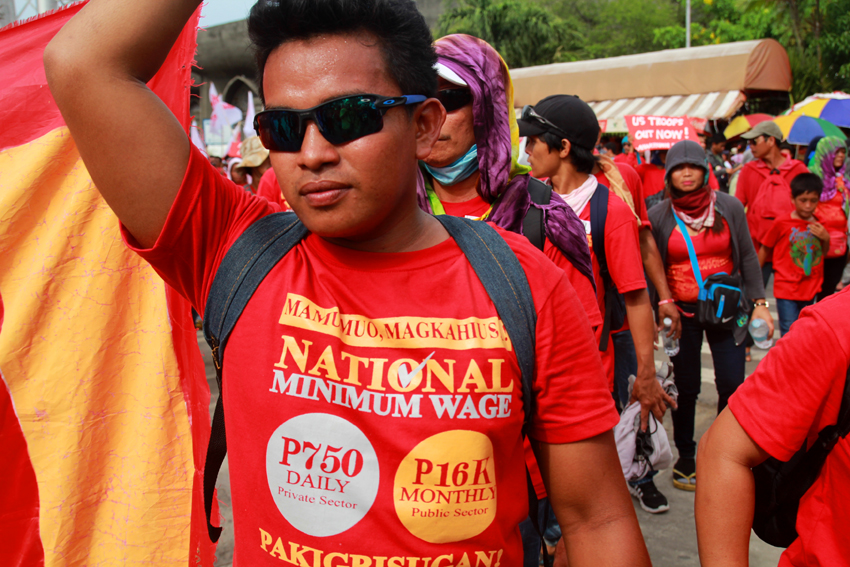 Workers wear shirts with their calls to raise the national minimum wage to P750 for the private sector and P16,000 for the public sector.(davaotoday.com file photo)

DAVAO CITY, Philippines — The militant labor group Kilusang Mayo Uno (KMU) has appealed to the government to implement a P750 wage across the board wage increase in a bid to ease the inflation.

“We’re still not talking here about giving decent living for workers. Our call for P750 minimum wage nationwide is just for them to at least cope with their loss amid the high inflation, oil price increases, and lack of public services,” said Jerome Adonis, KMU secretary-general.

Effective Jan. 1, a P2.00 per liter fuel excise tax would be added to last year’s P2.50 per liter on diesel and P7.00 per liter on gasoline under the government’s Tax Reform for Acceleration and Inclusion (TRAIN) Law.

This means the fuel excise tax on diesel will now be at P4.50 per liter and P9.00 per liter on gasoline.

Adonis said this year’s additional levy “does not serve well on ordinary workers” as the movement of oil prices in the country would affect the prices of basic commodities.

The Philippine Statistics Authority (PSA) announced on Friday, Jan.4 that the inflation rate continued to slow down to 5.1 percent in December 2018.

KMU has recognized the lower inflation rate compared to previous months, but still they are not impressed by the statistics.

“What we truly want is total price control…actual prices of commodities in the market are still high,” Adonis said.“How can a [contractual] worker save money, when they are already having a hard time to make (both) ends meet.”

KMU noted that it is depressing “as the government doesn’t seem to have a plan to raise the wage of ordinary workers” despite concrete proposals coming from labor groups.

“The problem is that they [government] don’t listen,” Adonis said.

KMU predicted that workers will face the “same old problems” this 2019 and the coming years if the Duterte government will not be serious to end contractualization, regularize workers, and providing them with decent wages. (davaotoday.com)