DAVAO CITY, Philippines – Under the scorching heat of the sun, workers from various unions and progressive organizations marched in the streets of Davao City signifying dismay over the failed promises to end contractualization in the country.

Led by progressive labor organizations Kilusang Mayo Uno Southern Mindanao (KMU-SMR) and Sentro ng mga Nagkakaisa at Progresibong Manggawa (SENTRO), the groups reiterate their call to end the contractual scheme among workers in the country as promised by President Rodrigo Duterte under his administration since 2016.

Coming from different group orientations, KMU, and Sentro in Davao region again convened their union members on the 133rd International Labor Day rallying once again for the government’s effort to solve the widespread contractual scheme and other issues in workplaces in the city and other parts of the country.

In an interview, Mercy Abucayon of Sentro told Davao Today that their group has been very hopeful ever since the president wanted to regularize contractual workers. Their group also received regular reports indicating that majority of the workers in the region face poor and unsafe working conditions in their workplaces.

Abucayon said Sentro remains consistent in its call for the government to prioritize the needs and benefits of ordinary workers.

“The president should keep his promise as we are becoming impatient in waiting. We cannot keep waiting knowing that our situation remains the same – poor,” Abucayon said. 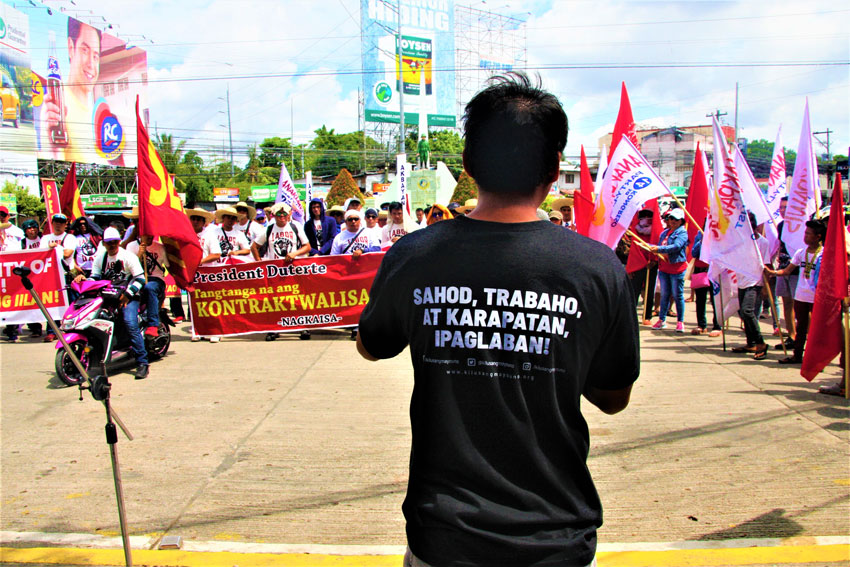 Workers from various unions in Davao region demand for salary increase despite the scorching heat of the sun. The group also went on with a short program to highlight issues and concerns of workers in the region. (Kath M. Cortez/davaotoday.com) 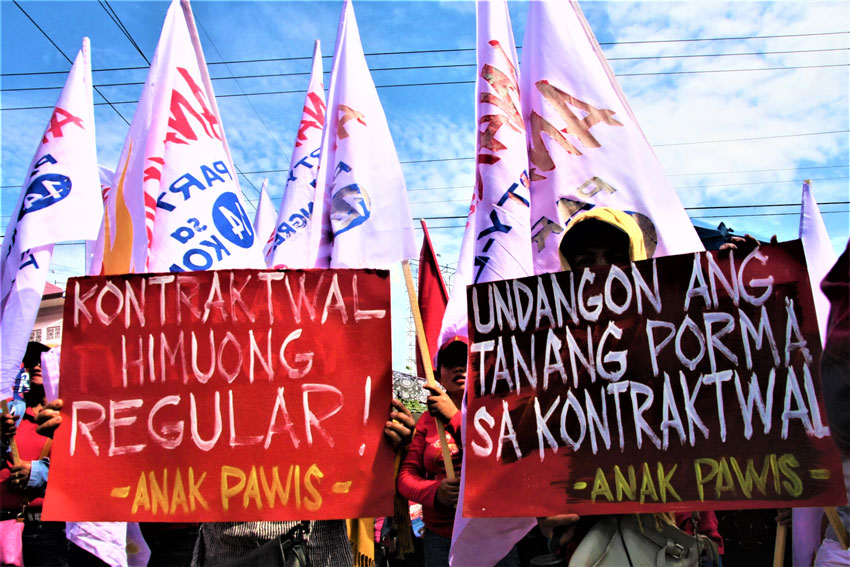 Workers from various unions in Davao region demand for salary increase despite the scorching heat of the sun. The group also went on with a short program to highlight issues and concerns of workers in the region. (Kath M. Cortez/davaotoday.com)

The commemoration of Labor Day on Wednesday did not only call for the regularization of workers across the country. KMU-SMR also lambasted the continuing effects of the implementation of martial law in Mindanao that “resulted in widespread human rights violations” among progressive union members.

KMU’s affiliate, the Nagkahiusang mga Mamumuo sa Suyapa Farm (NAMASUFA) lamented the never-ending harassment of their members as they continue to fight for the regularization of banana workers in Sumifru Philippines Corporation.

John Paul Dizon, chair of NAMASUFA-NAFLU-KMU recalled how “the company used the military to attack workers” as they were protesting last year. Dizon admitted he is also a target of the attack.

Majority of the more or less 600 members of the union had been the subject of force surrender after being tagged as supporters and members of the New People’s Army (NPA). 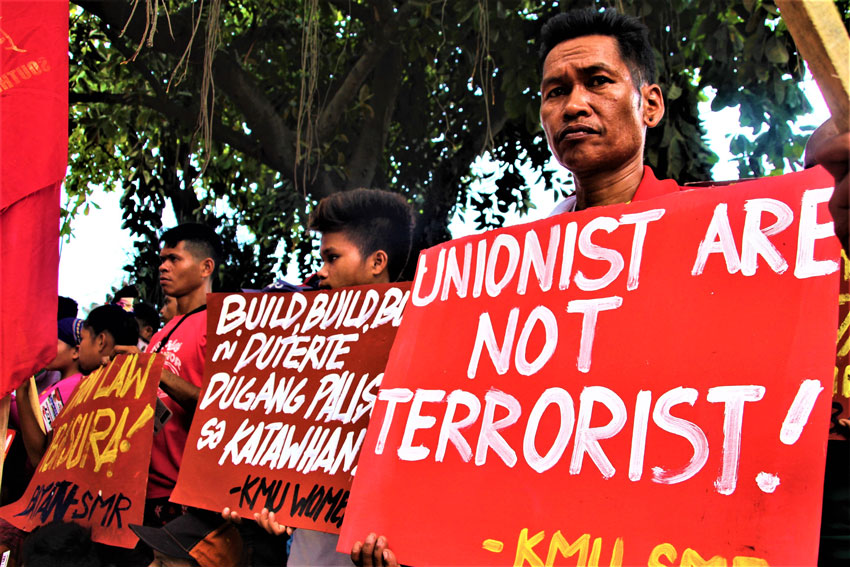 Workers and support groups showed placards telling of the widespread red tagging among union members in the region during the at the main streets of Davao City during the commemoration of Labor Day on Wednesday, May 1. (Kath M. Cortez/davaotoday.com)

The workers also recalled the killing of Danny Bautista, a union member and the wounding of union leader Victor Ageas in an attack staged by unidentified men wearing ski masks and riding in tandem. Another leader, Melodina Gumanoy, secretary of NAMASUFA-NAFLU-KMU, became a target of motorcycle-riding men on her way to work but was able to hide inside her house.

“We have enough with the Duterte regime’s attacks and red-baiting on our ranks. Instead of addressing our just demands to implement the Collective Bargaining Agreement (CBA), Dutere’s state forces, the AFP (Armed Forces of the Philippines) and PNP (Philippine National Police) served as private goons of the capitalist SUMIFRU. We have nothing to lose now and we are firm on our commitment to resist Duterte’s fascist regime,” said Dizon. 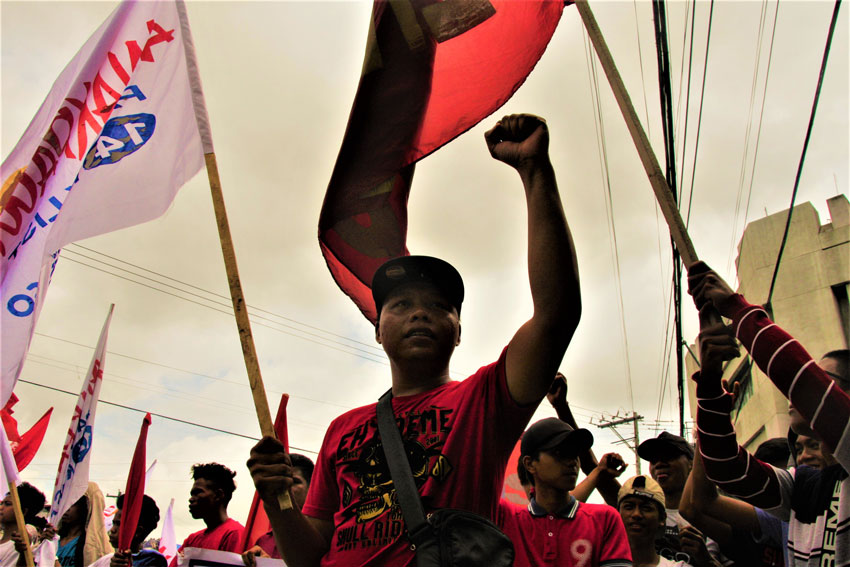 Union leader John Paul Dizon raises his fist during a protest action in time with the celebration of 133ed International Labor Day on Wednesday at the Orcullo Park in Davao City. Dizon, who leads the Nagkahiusang Mamumuo sa Suyafa Farms joined other unions in calling to end contractualization in workplaces. (Kath M. Cortez/davaotoday.com)

Both the KMU and Sentro also call for the passage of the Security of Tenure Bill currently pending in the House of Representatives.

In a separate interview, KMU-SMR secretary-general Carlo Olalo said they are supporting the efforts of members of Congress who are pro-workers.

“Workers are united in their call for the passage of all pro-workers bill in Congress. This effort is much needed to intensify the worker’s unified stand to end contractualization,” Olalo added. 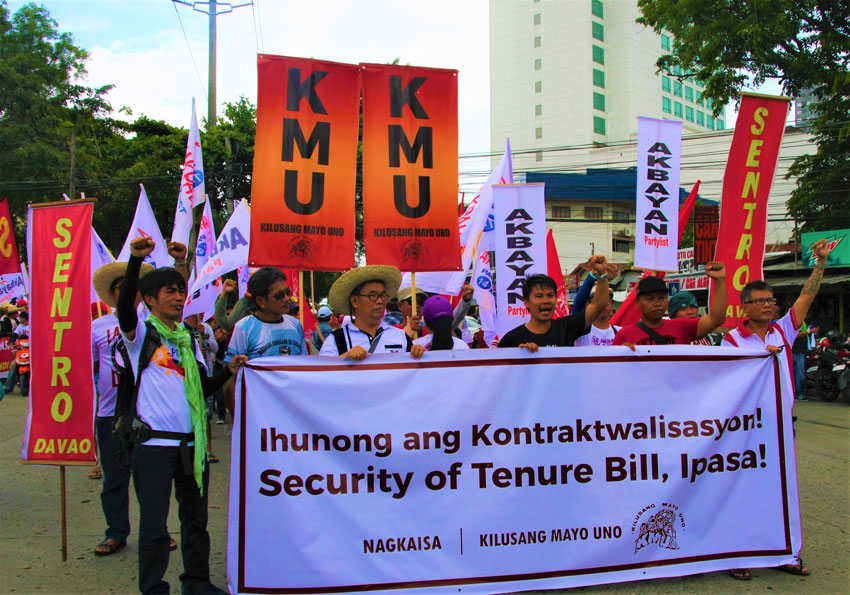 Labor leaders from various unions led the march of workers in Davao City united in their call to end contractualization. (Kath M. Cortez/davaotoday.com)

Cora Espinosa of Samakana told Davao Today that women in various urban poor communities signify to support the workers call as they themselves are in the mostly workers sector.

Espinosa explained that due to the low salary wage among workers and its unfortunate condition in their workplaces, many Filipinos remained poor and hungry as many employers failed to follow labor standards.

“Due to low salary, majority of the Filipinos has a poor living condition. This became our basis why we should be one with them in their struggle for workers’ rights. Workers’ rights are human rights too,” Espinosa said in the interview. 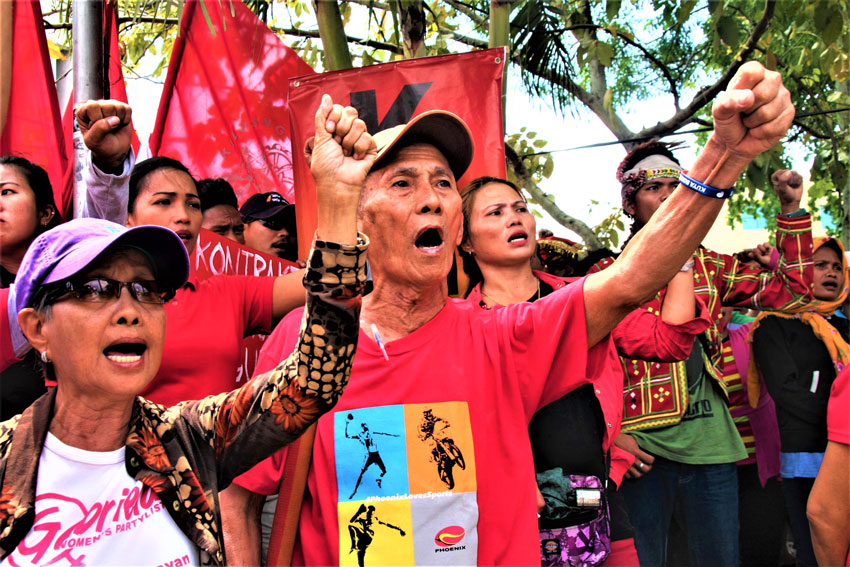