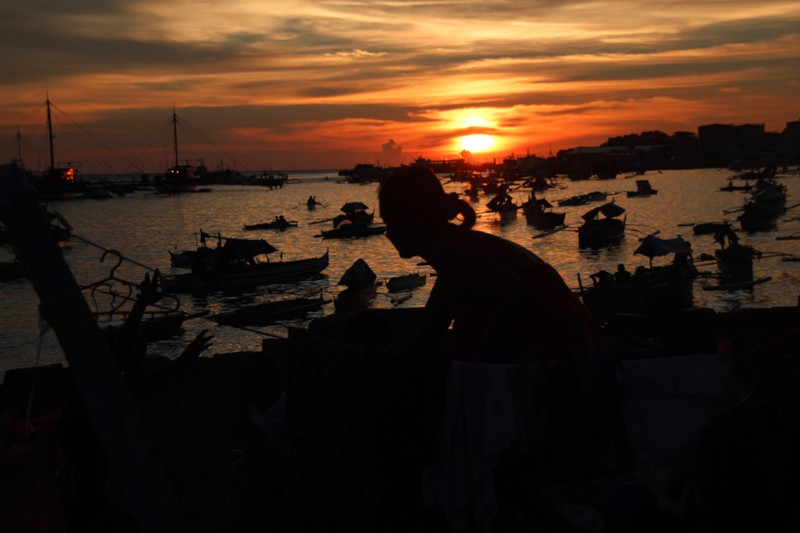 Zamboanga City – Ina, a mother of two, and a resident of Sta. Barbara village, pitched her family’s tent on a cyclone fence for volleyball at the Joaquin Enriquez Sports Complex. The cyclone wire made it easier for evacuees like her to hang their malong hammocks.

Ina was among the 62,000 civilians who were displaced following a standoff between the Moro National Liberation Front rebels and government troops since September 9.

Ina wished she had pots and cooking utensils so she could prepare the rationed food they got from aid agencies. “Sometimes, we get spoiled food,” she told Davao Today.

Department of Social Welfare and Development Region IX officer Narrabelle Bue confirmed that food preparation is their biggest problem but they are hiring more cooks to be paid under their Food for Work program.

“We are hiring some from nearby barangays; we also welcome volunteers,” she said.

But Ina’s children Abe, 14, and Badi, 17, and two other neighbors interviewed by Davao Today had other things in their mind more unsettling than spoilt food. They spoke on condition of anonymity.

How can they go on with their lives, now that their homes were burned to the ground? This and other fears were foremost in their minds, they said.

The boys remembered their encounter with MNLF forces last Monday, adding that their families only left their homes at around 5:00 in the afternoon or several hours after rebels arrived via shoreline.

“They were courteous, shook our hands and greeted us with Assalamulaikum,” Abi said.

He recalled that the MNLF forces explained to their elders what they intended to do.

“They said they plan to put their banner at the City Hall and leave it there for four days alongside the Philippine flag. They planned to hold a parade around the city, but they said they were not allowed to do so,” said Badi.

“They said they were merely fighting for their lives but they were also afraid to die,” said Badi.

Dali, a fruit vendor, said the MNLF forces were not really violent.

“They even assisted an old woman to climb up a jeepney that was heading out of their village,” he said.

Badi said the MNLF told them to board jeepneys and vacate their homes so they will not be caught in the crossfire.

In contrast, Dali and Charry (not their real names) told Davao Today they found it odd that the military burned houses of civilians as a form of strategy.

On September 13, the military burned the houses in the villages of Sta. Catalina, Sta. Barbara and Rio Hondo, Dali said.

“Our house was burned along with all of my cash,” lamented Dali.

Dali strongly believed that the burning is a strategy of the military because “if there are no more houses, the MNLF forces have nowhere to hide and it will clear (the military’s) view,” he said.

Charry, a resident of Sta. Barbara, agreed with Dali.

“I saw that there was a fire truck and firefighters nearby. A house was burning but the military did not allow the firefighters to act because they said there were snipers around,” he said.

Apart from the house burning allegedly committed by the military, a resident revealed to Davao Today that the military also made mistaken arrests.

Nidz Usman, a local Moro health officer, said they left their homes later than most of the evacuees in Sta. Catalina. This raised suspicions from the authorities that they were somehow connected to the MNLF rebels despite the fact that their family had members who were government employees.

“When we went out– there were 20 of us– we were accosted by the RSAF (Regional Special Action Force),” Nids said.

“We were interrogated 11am of Tuesday (September 10) and subjected to a paraffin test,” he said.

When the arresting officers learned that Mayor Beng Climaco knew Nids to be a health worker, the officers released them immediately and brought them to the evacuation center.

Badi said that they had a neighbor who was also arrested because he sported a long beard.

“It was the NBI (National Buruea of Investigation) who arrested him who was a tabligh (Moro missionary),” Badi said.

Badi said his neighbor had a nephew who was a police, and that forced the arresting officers to release him later.

For Dali, it was like an anti-Muslim hysteria is spreading, as he what he sees in Facebook posts.

Evacuees interviewed by Davao Today were one in saying that while they want the standoff to end, they do no want to become victims in the current military operations against the MNLF.

Dali said a compromise must be reached between the MNLF and the government.

“The government must listen to what the MNLF is saying, and vice versa,” Dali said.

Mayor Climaco, in a television interview yesterday, said she would not allow the MNLF’s goal of raising their banner and “staging propaganda.”

“We will never let you use us as a propaganda mechanism. We will never allow you to plant your flag in our city,” she said.

And the RT Lim Boulevard amid a backdrop of colorful sunset was a silent witness to their agony.

It was a sight to behold at the famous boulevard overlooking the Basilan Strait and Sulu Sea, where angled rays of the sinking sun transforms the sky’s colors over the horizon. The setting sun slowly turned the sky into a deep orange vista, cooled with dabs of blue before sinking crimson.