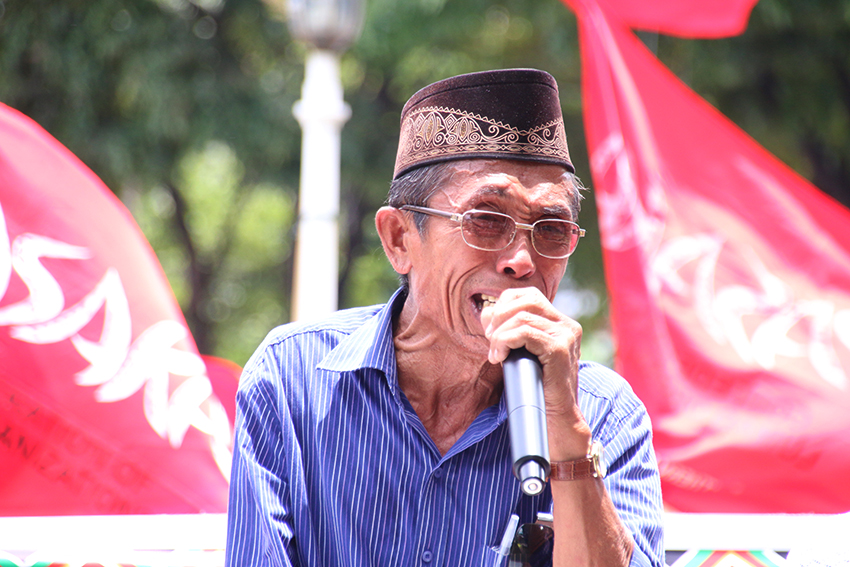 IN TEARS. Maranao leader Sultan Macara Sampuan is in tears as he narrated in a press conference at Fuente Osmeña Park in Cebu City on Tuesday, Aug. 22 the continuing destruction of the lives of the people of Marawi as the military air assaults and ground operations continue in the area. (Alex D. Lopez/davaotoday.com)

CEBU CITY, Philippines – If indeed President Rodrigo Duterte has Maranao blood in his veins then he should consider ordering the troops to end air assaults and ground operations in Marawi, a Moro leader raised this challenge.

“If that is true then he should show mercy to us,” Macara Sampuan said on Wednesday, August 23.

Sampuan joined hundreds of Lumad and Moro people here for a three-day protest camp that began on Tuesday, August 22. They were followed by another batch of protesters from Mindanao, totalling to a whopping 400 delegates staying at the city’s Fuente Osmeña Park.

Here, the delegates engage in daily symposiums, fora and other forms of discussion.

Sampuan said Duterte must focus his attention in rebuilding Marawi instead of pouring out the government’s resources to war.

“Until when shall we wait? Pity those who continue to languish in evacuation centers,” Sampuan broke in tears.
Days before leaving for Lakbayan, Sampuan visited Marawi including the area where he and his family and relatives reside.

“I cried when I saw our place. My relatives who accompanied me cried too. They asked me what to do to bring back our lives and homes. I have no answers,” he said.

Sampuan added he also visited the various evacuation centers to personally see the situation of the evacuees. The situation of Maranao evacuees, especially to the children and the elders, is a difficult reality to embrace, he said.

The protesters at the Lakbayan said the declaration of martial law by the President had stepped up the ground and air assaults in Marawi and the militarization in Mindanao.

It also paved the way for the hundreds of cases of human rights violations, not only among Maranao people but also to the Lumad and other Moro residents.

As of July this year, a total of 410,550 individuals or 89,639 families were displaced due to the continuing war in Marawi.

They said the Marawi crisis and the declaration of martial law in Mindanao also allowed the US to stiffen its interventions in the country under Duterte’s watch.

These are all designed to ensure the protection of the US interests in the country, including the dominance of big foreign corporations and capitalists, they added.

Lumad and Moro communities in the provinces of Sultan Kudarat, North Cotabato, Maguindanao, Bukidnon and the rest of Regions 10 and CARAGA are deeply disturbed due to the intense military activities.

Most of the Lumad and Moro leaders, if not killed, were charged with trumped-up cases and being suspected as members and sympathizers of the New People’s Army.

Martial law has now become a ticket for the AFP and the Philippine National Police to arrest and detain suspected NPA supporters and torture and harass Lumad and Moro leaders, the Lakbayan leaders said.

But the growing anger and resistance among the Maranao and in the Moro communities against martial law could no longer be hidden, the leaders claimed.

The Lakbayan, they asserted, will continue to unmask and tell the people of Visayas, Luzon and Metro Manila of the real face of the Duterte administration.

In his public speeches, Duterte has been telling the public of his Maranao bloodline through his maternal grandmother.

But his relationship with the Maranaos has gone into limbo when he declared martial law, although he had sought for forgiveness from them for his decision. (davaotoday.com)