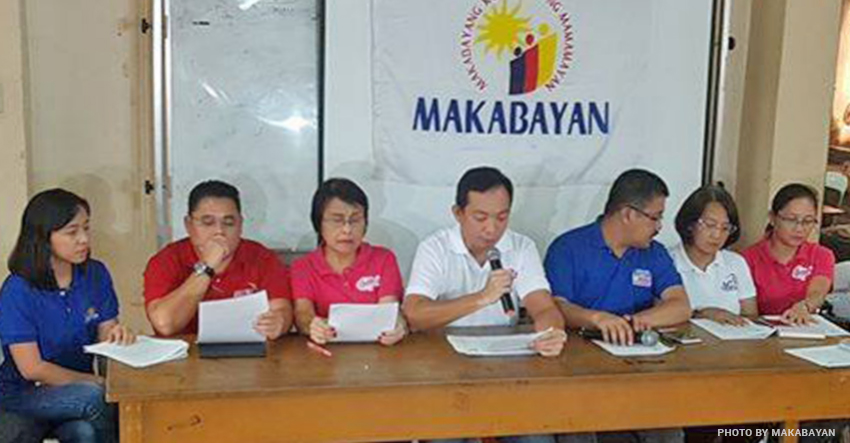 DAVAO CITY, Philippines — Seven lawmakers under the Makabayan bloc bolted out from the House majority on Thursday, September 14 citing the “unraveling of an anti-people” Duterte administration.

In a statement, the Makabayan bloc said the humanitarian crisis brought by the bombing of Marawi City and the imposition of Martial Law in Mindanao as evidence that the first Mindanaoan president is turning the island province “into an even more violent land of strife and lost promises.”

The Makabayan bloc said they disagreed with President Rodrigo Duterte in “his neoliberal economic policies, his disdain for human rights especially in his war on drugs, anti-crime and counterinsurgency campaigns, his rehabilitation of the former dictator Marcos, and his propensity for strongman rule.”

Duterte declared Martial Law in Mindanao on May 23 citing that the attack of the ISIS-inspired militants in Marawi City might spill over to other areas. The 60-day martial law was later extended until the end of the year by a Joint Congress session in July.

The lawmakers also claimed that Duterte has turned his back on his promise to cut ties with the US. “His independent foreign policy has turned out to be a farce,” they said.

They added that Duterte is now “as dependent as ever on the US for national security and has practically abandoned”our valid and internationally-recognized claims of sovereignty and territory in the West Philippine Sea in exchange for China’s promises of aid and investments.”

Casilao, in a phone interview with Davao Today, said one of the immediate repercussions of bolting out from the House majority is their possible removal from the committees where they serve as either, chairman, vice-chairman or members. Casilao, who currently serves as one of the vice chairperson of the House Committee on the Committee on Agrarian Reform, said Makabayan lawmakers will now be part of the independent bloc.

He said they “are not inclined” to join the minority.

The lawmakers said they joined the ​Majority as they initially supported Duterte’s “promise of change.”

They said they were encouraged by the reforms promised by Duterte including the resumption of talks with the Communists, release of political prisoners, ending of ties with the US and pursuit of an independent foreign policy, ending labor contractualization and increased support for farmers, among others.

The lawmakers also cited that the appointment of leftists and activists in Cabinet posts gave them a view that the pursuit of reforms in economy was possible under the Duterte leadership. However, the Commission on Appointments has rejected three of the activist members of the Cabinet including former Environment Secretary Gina Lopez, Social Welfare and Development Secretary Judy Taguiwalo and Agrarian Reform Secretary Rafael Mariano. (davaotoday.com)