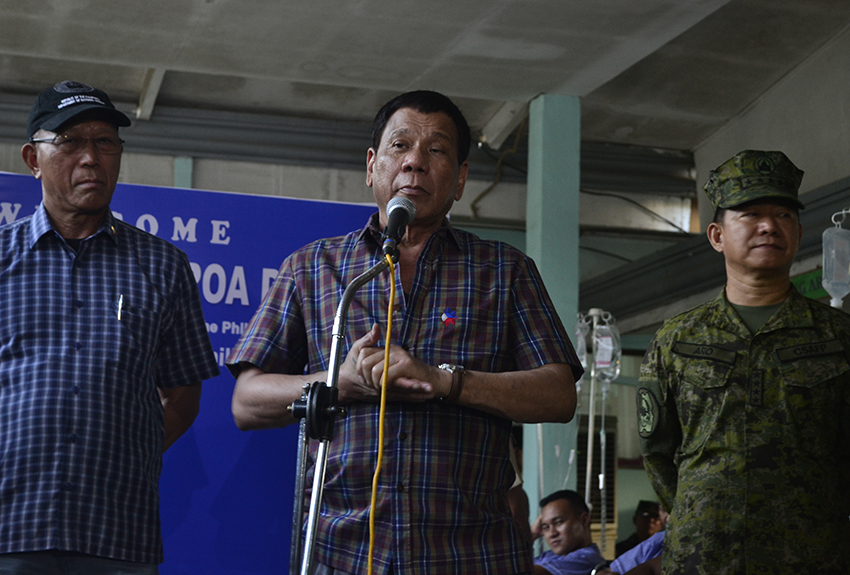 DAVAO CITY, Philippines – Amid human rights complaints from groups, Defense Secretary Delfin Lorenzana said he is hopeful that the Supreme Court will rule in favor to the legality of the declaration of martial law in Mindanao.

Lorenzana told reporters during the regular Mindanao Hour press briefing in Malacanang on Monday, July 3 that the highest court in the land wants to determine the factual basis of the declaration of martial law, and that, such requirement was sufficiently provided to the members of the magistrate of the high court.

“I was there, I briefed them, I and General Año (Gen. Eduardo Año, Armed Forces of the Philippines Chief of Staff) briefed them, briefed the Supreme Court en banc,” he pointed out.

The SC is set to decide on Tuesday, July 4 on the petitions filed by various groups and individuals questioning the basis and the legality of the declaration of martial law in Mindanao by President Rodrigo Duterte.

Among the petitioners was the National Union of Peoples’ Lawyers who cited the dangerous precedent of martial law imposition and the dangers it posed to the safeguards on the rights of the people as guaranteed by the Constitution.

NUPL added that President Rodrigo Duterte still needs to prove that martial law imposition is necessary to ascertain the security and safety of the people in Mindanao.

The group also feared that Mindanao declaration might lead to the imposition of martial law in the entire country.

Concerns about the impacts of martial law and the continuing all-out war policy of the present administration were also raised on the result of a National Interfaith Humanitarian Mission conducted last month in the provinces of Lanao del Sur, Davao del Sur, Maguindanao and North Cotabato.

In its finding, the mission belied earlier reports of the AFP and the Commission on Human Rights that no human rights were violated by the declaration of martial law.

“Martial law’s adverse and grave impact on the human rights and welfare of civilians demonstrates its lack of effectivity and casts doubt on its appropriateness as a response to a small, armed, and foreign-affiliated terrorist group,” the mission pointed out, adding that the measure’s motive is anti-people and anti-insurgency, targeting the Moro and Lumad communities in Mindanao.

Lorenzana believes otherwise, as he stressed of the sufficient information provided to the magistrates that will convince them on the factual basis of martial law implementation.

“I look forward to seeing that they will say that it is legal for the President to declare Martial Law in the first place,” Lorenzana said.

Lorenzana is named administrator of the declaration of martial law in Mindanao, with General Año and the machinery of the AFP as implementers. (davaotoday.com)