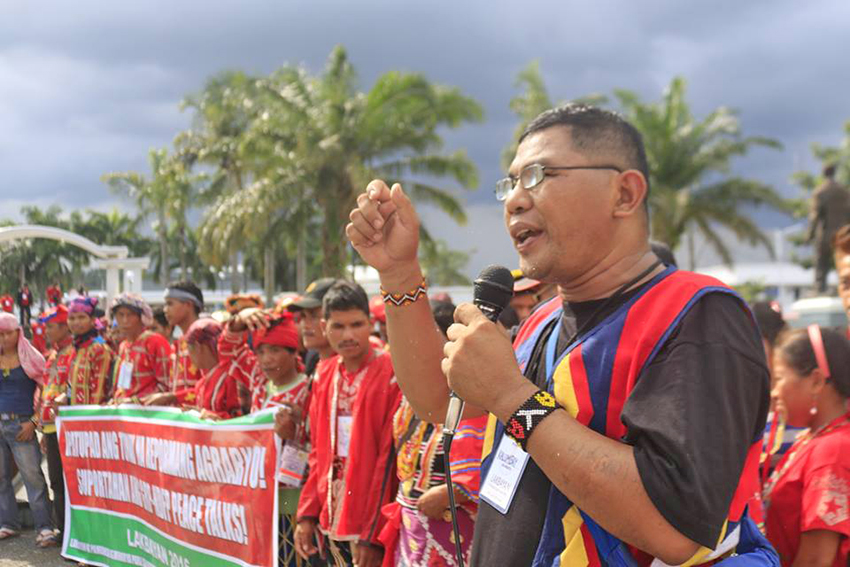 DAVAO CITY, Philippines — Lumad groups are pressing for the arrest of militiaman Alde “Butsoy” Salusad, the leader of paramilitary group New Indigenous Peoples Army Reform which they say is responsible for the deaths of several Lumad leaders and the subsequent mass evacuations.

Datu Jomorito Goaynon, chairperson of Kalumbay Regional Lumad Organization, said they have grown wary of Salusad, who also once surrendered to authorities as a member of the New People’s Army, but then surfaced and began a killing spree — this time as leader of the NIPAR.

“We are wary of how his arrest will be handled by the respective government forces. He had already surrendered before – as a previous member of the New People’s Army – and then went to our communities, still fully armed, this time with his own group of bandits called New Indigenous Peoples’ Army for Reform, and with the protection of state forces,” Goaynon said in an emailed statement.

Lumad groups have pointed at Salusad as the mastermind behind the death of Datu Jimmy Liguyon, then barangay captain of Barangay Dao, in San Fernando Town, Bukidnon in 2012, and the strafing of a wedding last year that resulted into the death of a pregnant woman and her child.

Salusad has a standing warrant of arrest for the murder of Liguyon, but remains free to this day.

“For years, even with arrest warrants, it had been difficult to arrest him. The police said they didn’t have the capacity to go against Salusad and his men. Now, they no longer have a reason – he, himself, will surrender. We want him arrested. We want him incarcerated. We want him to pay for all the pain he has caused our communities. If we could not have him on trial in our traditional court, then we ask the government to serve justice that we have been denied for so long,” Goaynon added.

In a Facebook post on Wednesday, Butsoy was seen shaking hands with Danny Cuarteros, an ordained preacher of Jesus Miracle Crusade. According to his profile, Cuarteros is the spokesperson of Evangelist Pastor Wilde Almeda, also of the same church.

The post contained three photos of Salusad posing with Cuarteros and several other persons, and one video, which depicted a short exchange between an unnamed man and Salusad.

In the video, Salusad said his ‘heartfelt’ request to President Rodrigo Duterte was to be granted “freedom” and together with his men, be given the chance to serve in the Army. Salusad appeared to be wearing a standard military uniform, and carried a long firearm.

The post however, presented Salusad as a member of the NPA — which is contrary to that of Guayno and several other Lumad leaders’ assertions.

In a phone interview with Davao Today, Goaynon said they knew that Salusad was a former NPA guerrilla, but had already surrendered to the military sometime in 2011 wherein he began to cooperate with the government.

He then resurfaced later as the leader of the NIPAR, which he said was an army backed force that regularly “sowed terror” in San Fernando. He went into hiding sometime in 2012 after he murdered Liguyon, and then surrendered again to the military in 2014.

Goaynon said Salusad roamed free not long after, with the military saying he had escaped and squandered several long firearms.

Goaynon said Salusad’s latest act was the strafing of households on April 26 of this year, which prompted the evacuation of some 90 individuals from their community in Sitio Salumpikit, Barangay Bunacao, San Fernando town in Bukidnon. The evacuees, Guayno said, have been encamped in the provincial capitol since May 1.

The army in several instances, have denied links to Salusad or the NIPAR. Davao Today has yet to receive replies to its inquiries from the military. (davaotoday.com)