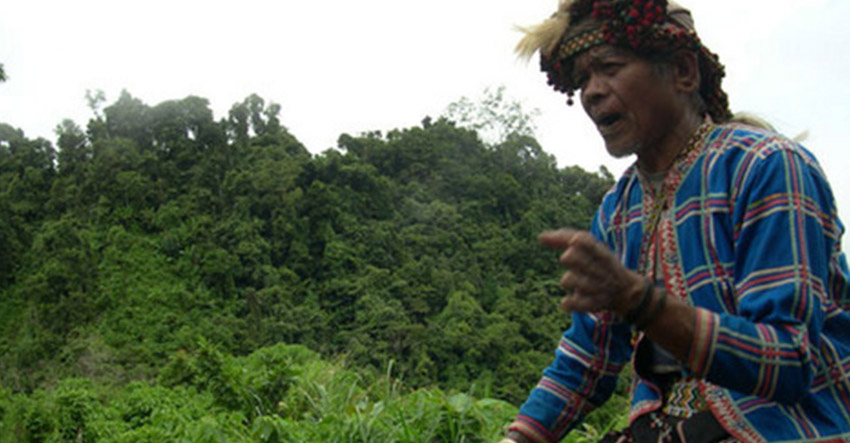 Datu Guibang Apoga, shown here in an interview with Davao Today in the mountains of Talaingod in 2006, promises to keep fighting for his dispossessed people. (davaotoday.com file photo)

Datu Guibang Apoga, the chieftain of the Ata-Manobo tribe in the hinterlands of Talaingod has been forced into hiding for nearly two decades now.

Apoga and several other datus who belonged to the Salugpongan Ta Tanu Ignakugon (Unity for the Defense of the Ancestral Land) were charged with murder in 1997 for the alleged murder of Alsons guards. Posters bearing his picture indicated a 500,000-peso reward for his capture.

But for Manobos of Talaingod, Datu Guibang is their wise leader, the staunch defender of their lands.

According to Pasaka in a statement, Apoga needs to recover from ailment and had decided to let him stay in the community of Nasilaban, Talaingod, Davao del Norte.

“Widespread military operations in the communities of Salugpongan intensified upon the entry of the 56th Infantry Batallion three months ago. They took advantage of Datu Guibang’s ailment; two soldiers forced him to surrender,” the group added.

Datu Guibang Apoga refused the offer saying “protecting the rights of the tribe is never a crime.”

Datu Guibang in a statement by Katribu in 2009 said,”If I surrender, the suffering of my people in Salugpongan will multiply. Those projects, which we managed to push away, will come back. I learned a lesson from Tata Gawilan of Bukidnon who surrendered — and look what happened? He got all the benefits by himself but the rest of his tribesmen were still as wretched as ever. I’d rather die for the people, for the Ata Manobo than surrender. If I surrender, what purpose is there left of me? What will I gain? Will it bring something good to the descendants of Salugpongan?”

In its recent statement, Pasaka belied the accusations of the military that Datu Guibang Apoga received money in defending their land and that he now allegedly approved the entry of mining companies and big corporations in their ancestral domain.

“Datu Guibang should be given immediate medical attention and a safe place for recovery in Talaingod. Moreover, we call for legal aid to help in fighting the trumped-up charges on him,” said Jong Monson, Secretary General of Pasaka.

“The 56th IB along with Andigao Agay of the paramilitary group Alamara should stop harassing Datu Guibang and his family. Forcing him to surrender endangers the community and community schools in Talaingod,” Monzon added.

Datu Guibang Apoga was one of the ten awardees of the “Gawad Bayani ng Kalikasan Awards by the Center of Environmental Concerns in December 2009. (davaotoday.com)