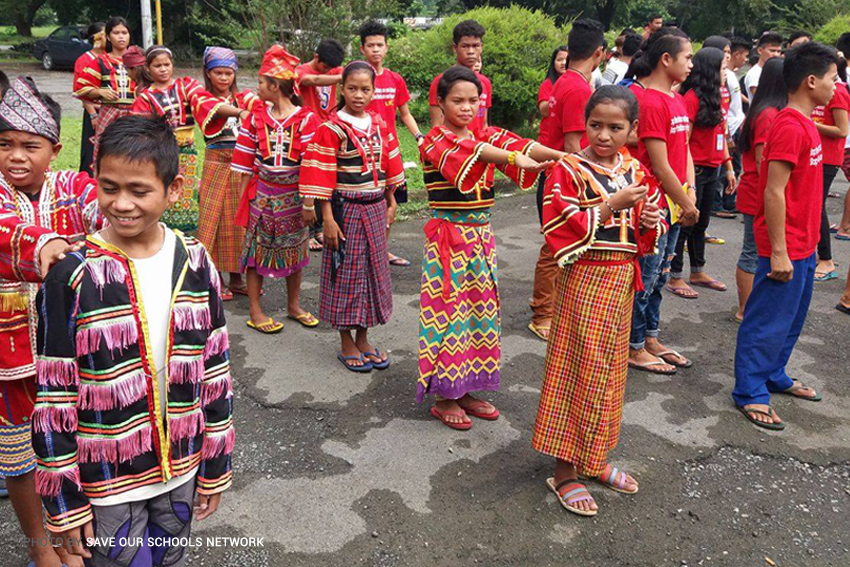 FILE/Photo courtesy of Save Our Schools Network

The passengers were supposed to board a Cebu Pacific 5J 964 flight departing from Davao to Manila at 10:10 am on the same day. But after further verification at the airport, the flight was moved to 12:50 pm.

Lindy Trenilla, a social worker at Kabiba Alliance for Children’s Concerns, said the group showed permits acquired from the City Social Services and Development Office (CSSDO). Yet they were placed on hold by airport authorities.

A police officer they identified as “Salazar” suspected them of “trafficking the minors,” Trenilla told Davao Today in an interview.

“They said that they are being strict because they saw children being transported to Manila , and alleged they would they would be used in rallies,” Trenilla said.

She argued that it is the right of the children to join protest actions and speak about what is happening in their communities.

Of the 36 passengers, 20 of them were minors. They were, however, accompanied by six parents, two teachers, and a social worker.

Maria Luisa Bermudo, City Social Services Development Officer (CSSDO), said the passengers could be put on hold since airport authorities require to follow a procedure aligned with her agency’s.

“There are no exemptions, even if you are government officers,” Bermudo told Davao Today in a phone interview.

Bermudo said the CSSDO issued permits to travel to 10 Lumad children aged 15 years old and below as provided by the Children’s Welfare Code of Davao.

“The permit to travel were processed and released after necessary documents were provided. The documents included birth certificates and parental consent. We made sure that these papers were validated,” Bermudo said.

However, the children’s documents went through verification process at the airline counter. Bermudo said they informed the airline and the airport police that the papers were already verified.

However, Trenilla said they felt the Lumad children were discriminated.

“There were a lot of passengers at the airport but were they singling out the Lumad?” Trenilla lamented.

Lagamon said this was something beyond their control, adding that the security is “a little tight in Davao.”
She assured that the airline has waived the charges for these passengers. (davaotoday.com)