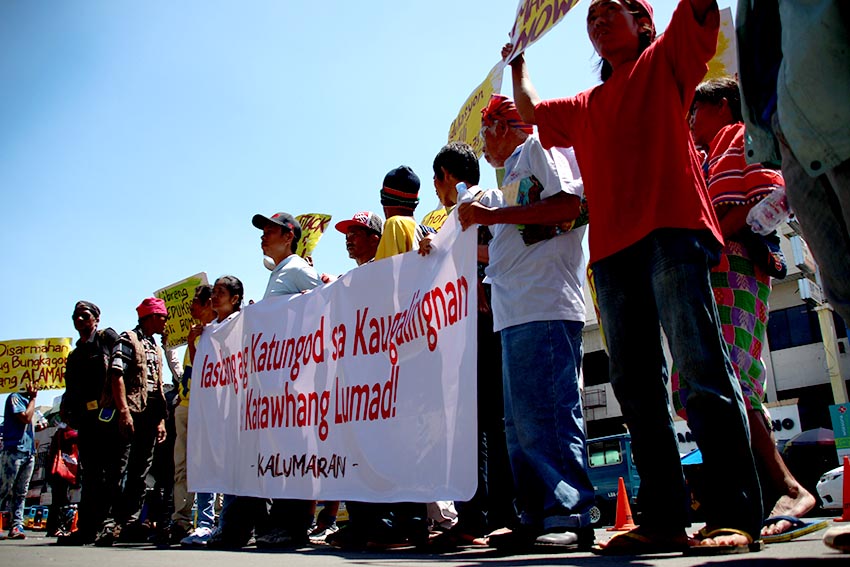 INDIGENOUS PEOPLES DAY. Members of Lumad group Kalumaran Mindanao hold a picket at San Pedro Street in observance of the International Day of the Indigenous Peoples on Wednesday, August 9. The group also announced the Lakbayan 2017, where thousands of Lumad and Moro people will travel to the capital for a protest caravan. (Paulo C. Rizal/davaotoday.com)

DAVAO CITY, Philippines — Around 1,500 Lumad​s​ and Moro people from Mindanao will be travelling to Manila this year to join a protest caravan of national minorities from ​across the country, a Lumad group announced on​ ​Thursday here.

Dulphing Ogan,secretary general of Kalumaran Mindanao, said the delegates from Mindanao will be leaving on August 23, and are set to arrive in Manila on August 31. He said they will be staging a protest rally in Mendiola on September 1, which marks the third anniversary of the Lianga Massacre.

Ogan said they are expecting a total of 3,500 delegates to join the caravan, which will include minorities from the Visayas and Luzon as well.

Ogan said this year’s caravan will be a mirror of past protest caravans, which centered around the campaign to stop the attacks on their schools, and the murder of their schools.

However, he said this year’s caravan will highlight the state of the Lumad under the administration of President Rodrigo Duterte, who recently ordered the bombing of Lumad schools in Mindanao that he alleged to be teaching communism and subversion against government.

Ogan said they had very high hopes for Duterte, but were very disappointed by his recent pronouncements.

In addition, the groups will also call for the lifting of the Martial Law in Mindanao.

Minda Dalinan, secretary general of Kahugpungan ng mga Lumad sa Halayong Habagatan ng Mindanao, said M​artial ​L​aw, which Duterte declared for the purpose of quelling the Maute group’s siege in Marawi City, also targeted progressive groups, including the Lumad who are only protecting the environment and their ancestral domains.

(They are not only targeting the Maute or the ISIS, they are also hunting for the leaders and members of progressive groups protecting the environment by resisting the entry of big companies such as those engaged in mining), she said.

Dalinan, who hails from CARAGA, said their ancestral domains are constantly endangered by logging and mining companies seeking to take advantage of their natural wealth.

Dalinan said CARAGA is currently riddled by several mining and logging companies who entered and are currently encroaching the ancestral domain of the Lumad.

(In our region there are two companies applying for mining permits. There is the San Miguel Corporation, or the Dauma Mining Incorproated in lake Sebu which occupies 39,000 hectares. The Sagittariys Mining Industry in Tampacan has 195,000 hectares. There is also the massive logging company of David Consunji in Sultan Kudarat Distrct 2, which has the land area of 15,000 hectares. This company endangers 6 municipalities: Esperanza, Lebak, Palimpang, Senator Ninoy Aquino, Bagumbayan [and Kalamansig]), she said.

Dalinan added that there is also Sumifru’s 30,000 hectare banana plantation, Stanfilco has another 30,000 hectares, while another yet unnamed company is set to create a 30,000 palm oil plantation in the region.

“Asa kana karon ipahigayon nga mga lugar, kundili, mao gyud ang mga komunidad sa mga Lumad” (Where else could these plantations be, except the communities of the Lumad), she said.

Last year, the 3,000 – strong caravan formed the Sandugo, an alliance of indigenous and Moro people nationwide, who called themselves the national minorities, alluding to the state’s “systematic minoritization” of both the indigenous and the Moro people.

Last year’s caravan also resulted into a bloody clash between protesters and Manila police, with a police vehicle running over protesters who were holding a prgram outside the US embassy. (davaotoday.com)