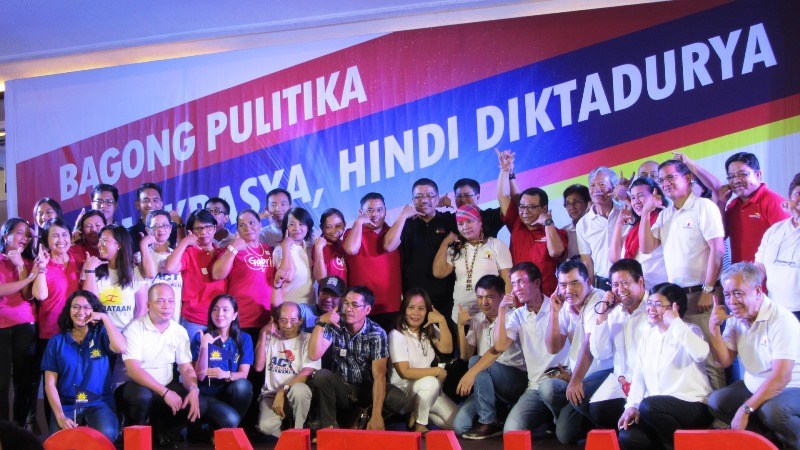 MANILA, Philippines – ‘Senador Neri Colmenares’. That’s how he would be called if the Philippines’ most organized party, with the most number of organizations and members tried and tested in mass campaigns, ably put their acts together as one super broad electoral machinery. Bayan Muna’s Teddy Casiño and Nathaniel Santiago offer some guidelines on how, accompanied by a snappy tune and a hefty dose of humor. In the coming midterm elections, they plan to infuse the discussions on the streets, shops, schools, churches, social media, etc, with “New Politics.”

Fellow senatorial candidate Erin Tañada draws some laugh out loud moments with his tales at the Makabayan convention. (Photo by M. Salamat / Bulatlat)

The Makabayan bloc announced Tuesday, Sept. 25, in a rousing conclusion of its fourth national convention, that they are fielding as a candidate for Senator Neri Colmenares. The chairperson of Bayan Muna and president of the National Union of People’s Lawyers is a three-termer representative of Bayan Muna in Congress. A staunch defender of human rights, he is dubbed by his colleagues as “Fighter ng Bayan”. He has been busy these past months exposing President Duterte’s drive for charter change, dictatorship and “false federalism.”
Makabayan brings together various progressive partylists such as Bayan Muna, Anakpawis Partylist, ACT Teachers’ Party, Gabriela Women’s Party, Kabataan Partylist, and others such as the Manggagawa Party, Aksyon Health Workers’ Party.

Taken together, these partylist groups have won seats in Congress for several terms now since 2004, “without ever having been smeared with issues of corruption nor servility to exploiters and oppressors,” said Teddy Casiño, also a former representative of Bayan Muna in Congress.

Having announced their support for a Senator Colmenares campaign, Casiño reiterated how the Makabayan bloc has one of the biggest potentials for electoral success: it has “the most organized” of groups, and the clearest, just and pro-people platform.

He said Makabayan is the strong party to beat – the group is the only party with a clear record of service to the people against self-serving opportunists and politicians with a taint of corruption or patronage politics. 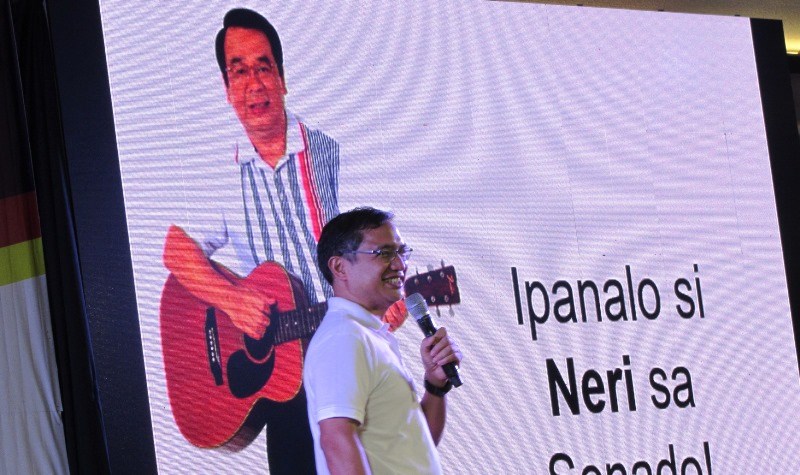 Organized and humorous: Teddy Casiño of Bayan Muna shares how the Makabayan bloc will work together in the upcoming midterm election. (Photo by M. Salamat / Bulatlat)

“It’s high time the people get to have a voice in the Senate,” Casiño said to loud cheering of supporters at the Makabayan convention.
At the upcoming midterm election, the burning issues will most likely be Duterte’s drive for a dictatorship, chacha, “false federalism,” the intensified implementation of neoliberal policies. Colmenares warned that all these will be rammed down the people’s throats unless we act together to oppose it.

“The trouble with Duterte is, when you complain about TRAIN (increased taxes), you’re accused of destabilization. When you criticize China’s actions in the West Philippine Sea, you are a communist,” Colmenares said.

What’s worse is, Duterte is intolerant of dissent, and not at all a sport, Colmenares added. “Duterte badmouths anyone but is infuriated when he himself is told off, and he uses his power to go after his critics,” Colmenares said.

Makabayan summarizes their participation in the elections as one “for new politics,” one which is not for a politician family’s aggrandizement and patronage politics but for the interests of the people. It admits to lacking the huge amount of money that traditional politicians have, but it’s confident of its plans to tap the “organized strength of the Filipino people” to end the midterm election victorious with a Senator Colmenares. (Reposted by davaotoday.com)