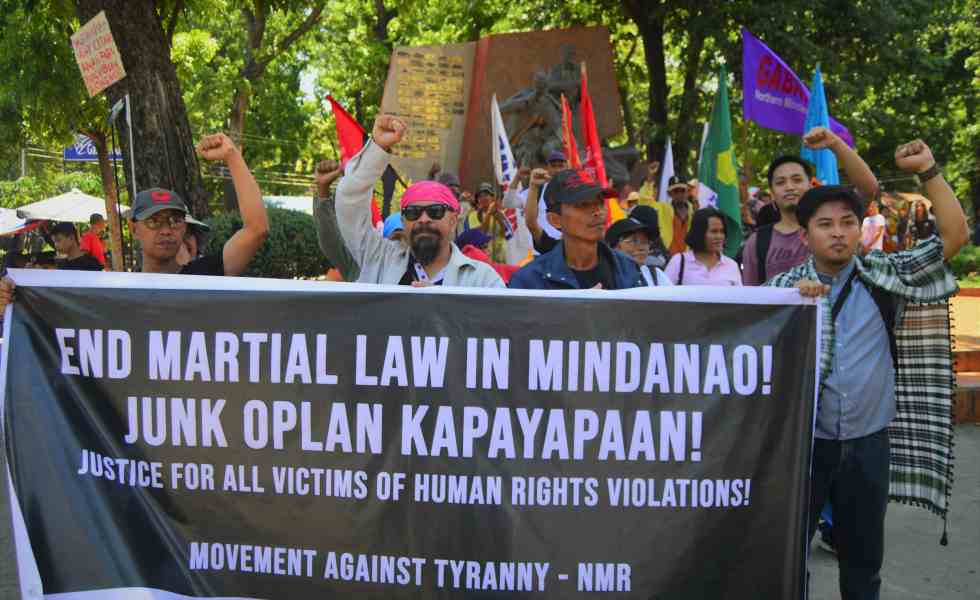 Protesters have urged the Duterte government to put an end to martial law and to ensure that the displaced residents of Marawi City are allowed to go back to their homes, in Cagayan de Oro on Wednesday, May 23. (Jigger J. Jerusalem/davaotoday.com)

CAGAYAN DE ORO CITY, Philippines – Protests have continued to mount as the first year of the Marawi siege and the declaration of martial law in Mindanao were remembered on Wednesday, May 23.

In the city, dozens of protesters from various groups staged a march rally to express their outrage and dismay at the way the present administration has handled the situation in Marawi, from the displacement of its thousands of residents due to the fighting between state troops and ISIS forces, to the planned rehabilitation of the war-torn city.

In a statement, Fr. Rolando Abejo, an Iglesia Filipina Independiente (IFI) priest and spokesperson of the Movement Against Tyranny (MAT) in Northern Mindanao, put the blame on Pres. Rodrigo Duterte and his policies not just on the reconstruction of Marawi but of the continued killings of civilians.

The cleric said a year after the declaration of martial law in Mindanao, “Duterte has revealed his true agenda in the island-region, especially for the Islamic city of Marawi.”

The residents of the city, he added, have long called for justice and reconstruction with the hope of their immediate return to their communities.

“But now, progress has only come for transnational and multinational corporations. Instead of the actual stakeholders, these TNCs and MNCs were the first groups approached to aid in the city’s rehabilitation whose plans include new eco-tourism spots and a new business district,” Abejo said.

For its part, the League of Filipino Students (LFS) in the region has urged the youth sector to join the movement to demand Pres. Duterte to put an end to military rule in Mindanao.

“A year has passed and the blood of Mindanawons has overflowed from his iron fists. We will stand with the people of Marawi and Mindanao in calling to end Martial law and resonate the call for justice for all victims of human rights violations,” said Kristine Cabardo, LFS-Northern Mindanao chairperson.

Protesters have also urged the Duterte government to put an end to martial law and to ensure that the displaced residents of Marawi City are allowed to go back to their homes. (davaotoday.com)