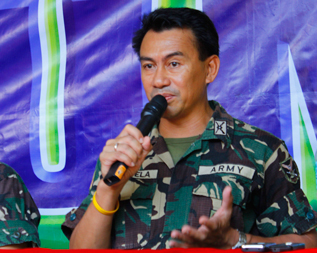 In schools that served as polling centers here, soldiers from the 25th Infantry are observed to have stayed nearer, less than five meters, to be exact.

COMPOSTELA, Compostela Valley, Philippines – Government troops here are not observing the 50-meter radius distance from the polling centers, a violation of Commission on Elections (Comelec) Resolution 9485.

In schools that served as polling centers here, soldiers from the 25th Infantry are observed to have stayed nearer, less than five meters, to be exact.

The province is part of the “conflict-affected areas” the military has set its intel on, according to Major General Ariel Bernardo, commanding officer of the 10t Infantry Division, in an interview last month during the preparations for the elections.

Meanwhile, soldiers also stayed at the Kapihan Elementary School in Malabog, Davao City, where one clustered precinct is located.

Krista Melgarejo, Kontra Daya convener, said even priests in Baganga town complained that the 67th Infantry Battalion under Lt. Col. Krishnamurti Mortela has “engaged in partisan-politics by leading prayer rallies” days before the elections to support a candidate allegedly under Governor Corazon Malanyaon.

Soldiers and police personnel were deputized by the Comelec, based on Resolution 9570, to ensure “free, orderly, honest, peaceful and credible conduct” of the elections.  But they have to observe the 50-meter radius distance, unless a problem arises and that an “order in writing” has been secured from the Board of Election Inspectors.

The same resolution prohibited the government troops from engaging in any partisan political activity, except to vote.

Voters in Gabi village, Compostela town went to the polling center as early as 7 AM.  But those who are listed in Clustered Precincts 68A, 69A-B, 70A and 73A-B were surprised to learn that their ballots did not bear the name of the local candidates.

It was later found out that the ballots are intended for the Clustered Precincts 379A-B and 380A-81A in Lualhati, Baguio City.

A total of 858 registered voters were affected in Gabi while an undetermined number in Lualhati.

Balisado said once the machines are not brought to their respective areas by 3 PM, the elections in these areas will be postponed.

In Clustered Precinct 26 in Simsimin Central Elementary School in Kahayag village, New Bataan town, only 49 ballots were accepted by the machine.  There are 552 voters here.

Despite a number of attempts, the PCOS would only read “Return Ballot.”

Marlene Ilagnota, a member of the Board of Election Inspectors in Simsimin said they would have to wait for advice before they can act on the matter.

The same problem was monitored in Clustered Precinct 16 in Bantacan Central Elementary School, Bantacan village in New Bataan town where only 231 ballots were accepted by the machine.

This was also the problem in Montevista Central Elementary School (MCES), Montevista town.

Dexter Sequina, MCES principal said they already requested the PCOS supervisor for a replacement since morning.  But the National Support Center has not immediately approved the request.