Mindanao bishop hopeful of resumption of talks between gov’t, Reds 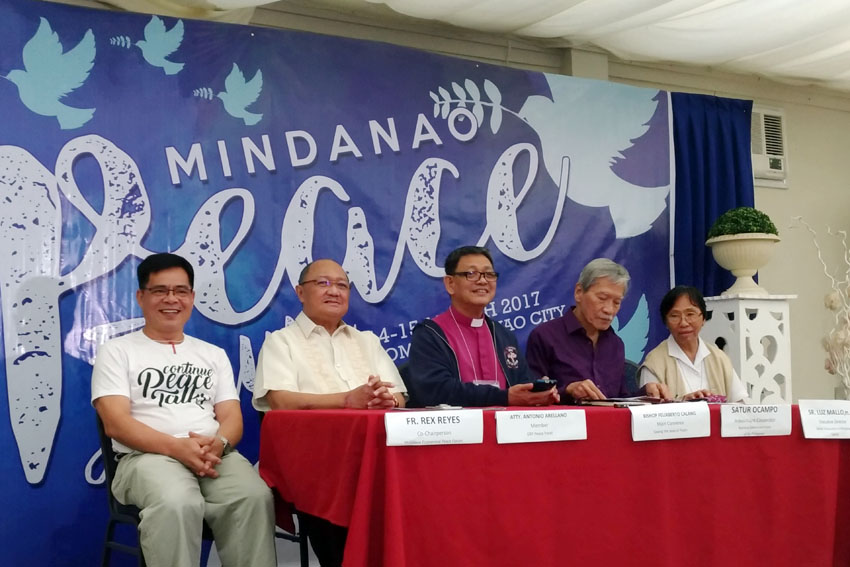 CAGAYAN DE ORO CITY, Philippines – Despite the setback in the peace negotiations, church leaders are optimistic the government and the Communists will go back to the negotiating table as it urged the present administration to be relentless in its endeavor to put an end to the decades-long conflict in Mindanao and not be swayed by those who are trying to obstruct the peace negotiations.

Peace talks between the government and the National Democratic Front of the Philippines (NDFP) were ​cancelled following President Rodrigo Duterte’s pronouncement to end the talks just as panelists are scheduled to meet again for the fifth round of negotiations next month.

Bishop Felixberto Calang, of the Iglesia Filipina Independiente (IFI), said they are challenging the government “to pursue the peace talks, even if peace spoilers are passionate enough in their quest to sabotage the process.”

Although dismayed by Duterte’s announcement to cancel the peace negotiations which he had renewed following his assumption into office last year, Calang said there is now a pressing need for the government to go back to the negotiating table so issues affecting the Filipino masses could be resolved after years of being shelved.

“It is for the welfare of the people that peace talks conclude to address the root causes of the armed conflict,” he said in a phone interview on Monday.

Calang, co-convenor of the Philippine Ecumenical Peace Platform (PEPP), a gathering of church leaders from various denominations in the country, said they support ​an initiative to revive the talks amid hostilities between the members of the New People’s Army (NPA) and government troops.

The PEPP has been acting as third-party facilitator to peaceful negotiations leading to the release of police officers and military personnel captured by the NPA in the past, as well as participating in peace-related initiatives by the government and the private sector.

He said “it is through the peace talks that a genuine agrarian reform and rural development coupled with national industrialization and economic development will have its realization.”

Setbacks like the extension of martial law by Congress and Duterte’s decision to discontinue the talks following the ambush of his security escorts, said Calang, has not dampened the optimism of the PEPP and other civil society organizations to support peace.

“Peace advocates will remain vigilant in their painstaking work of peace constituency building and consolidation because real peace is attained not with the barrel of the guns but by a responsible government that provides job and justice, and serves food and freedom for its people,” he added.

​Former NDF negotiator, ​ Satur Ocampo, in a separate interview recently, said the government could not just discontinue the negotiations with the NDFP because Duterte said so.

Ocampo who also served as a partylist lawmaker for Bayan Muna is now an “independent cooperator”​ actively involved in the peace talks between the government and NDFP.

For the peace talks to be officially terminated, Ocampo said, the government must first submit a formal letter to the NDFP office expressing its intent to put an end to the negotiations.

Both the government and the NDFP, he said, “have to go to the process before the declaration of the termination of the peace talks.”

After the submission of a formal notification, he said the government panel must wait for acknowledgement from the NDFP, and only then can the peace talks be officially terminated.

But, Ocampo said, this is the second time that Duterte has declared the termination of the talks, first in February when members of the New People’s Army (NPA) killed six soldiers and taken captive three military troopers.

A few days later, panelists from both sides went back to the negotiating table to resume the talks.

His second announcement was made following the ambush of the Presidential Security Group in Arakan, North Cotabato recently.

Ocampo said Duterte is prone to issuing statements at the height of his outbursts, many of them he will recant after his episodes of flare-ups had subsided.

With this, Ocampo said he is hopeful that Duterte will reconsider the revival of the peace talks after his anger has died down.

He said it is important for the President to confer with his panelists to implement the proper procedure if peace negotiations are to be officially terminated.

“Duterte said in [State of the Nation Address], ‘I will continue to pursue peace.’ How can he pursue peace if he will stop the peace talks?” he added.(davaotoday.com)