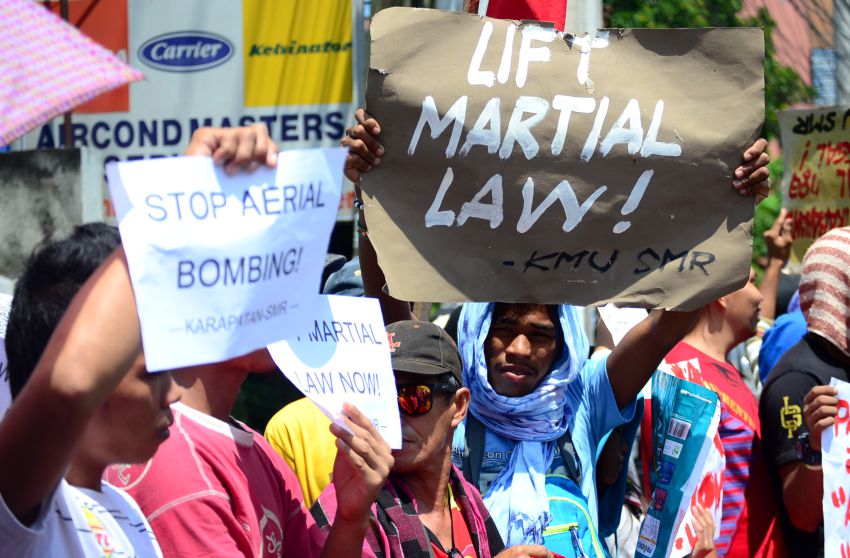 LIFT Progressive groups in Davao City appealed to President Rodrigo Duterte to lift Martial Law in Mindanao because of the rise of human rights violations. Activists protested in front of the office of the Commission of Human Rights XI on Friday, June 23, a month after Duterte declared Martial Law. (Robby Joy D. Salveron/davaotoday.com)

DAVAO CITY, Philippines—Several key cities in Mindanao is slated to join the protest action on Thursday, September 21 to condemn extrajudicial killings in the country under the Duterte administration.

Led by the Movement Against Tyranny (MAT), the protest action will culminate at the Luneta Park commemorating the 45th anniversary of Martial Law declaration. Similar protest actions will be held in the cities of Butuan, Davao, Cagayan de Oro, Bukidnon and Iligan.

“Duterte has embarked on a desperate effort to obfuscate the objectives of the September 21 rally in Luneta and the entire country. He thinks that by trolling protesters and creating absurd scenarios, he can confuse the public into inaction,” Bayan said in a statement Wednesday, September 20.

The mass actions will also highlight pressing issues such as the extra-judicial killings, Martial Law, militarization in the countryside, the war in Marawi, attacks on institutions, the Marcos restoration, and the steady march towards dictatorship of the Duterte regime.

Thousands are expected to join the protest actions across the country.

In Manila, Bayan and Sandugo, a group of national minorities, will converge in front of the University of Sto. Tomas on Thursday noon before protesters will march to Mendiola with a Marcos-Duterte effigy described as a “Rody’s Cube”.

In Davao, close to a thousand of protesters led by Bayan- Southern Mindanao Region are expected to join the protest action on Thursday afternoon at the Freedom Park along Roxas Avenue.

Prior to the Luneta rally, various groups will hold their separate assemblies and events.

“The Duterte regime has bullied and pushed the people too far, too long. On September 21, we push back,” the group said.(davaotoday.com)