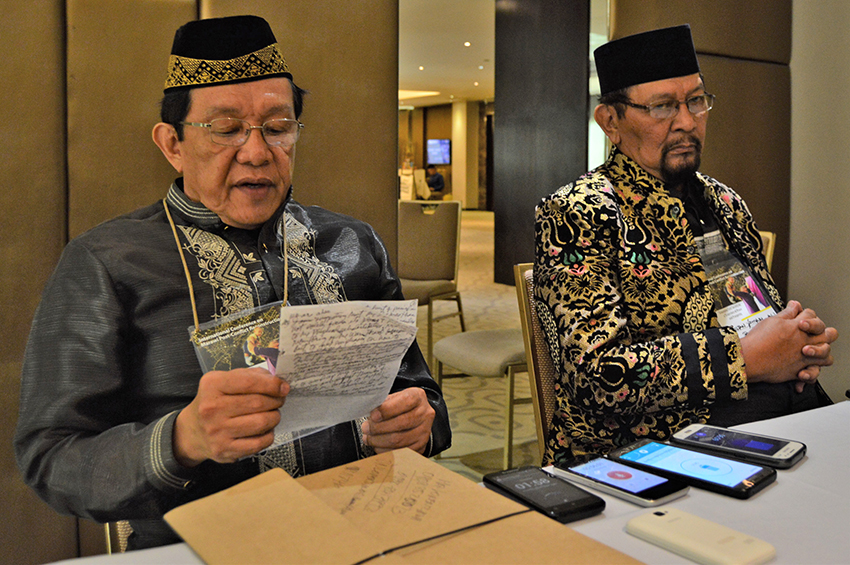 Maranao leaders urge government to extend financial assistance to business owners in Marawi ​City so they can recover from their losses due to the fighting there between state forces and armed extremists. In the photo are Sultan Nasser Sampaco (left), chairman of the Marawi Sultanate League, and Sultan Ysmael Ali, the sultan of Balo-i, Lanao del Norte, and member of the Sixteen Royal Sultanate of Lanao. (Jigger J. Jerusalem/davaotoday.com)

CAGAYAN DE ORO CITY, Philippines – Some Mindanao lawmakers have expressed their support for the rehabilitation of the besieged Marawi City through allocation of funds as the Lower House has started deliberating the budget for next year.

The Lower House has begun scrutinizing last August 1 the proposed national budget for 2018 in the amount of P3.767 trillion, which is dubbed as “The Budget that Reforms and Transforms,” said the House of Representative on its website.

The proposed budget was handed over by President Rodrigo Duterte to House Speaker Pantaleon Alvarez and Senate President Aquilino Martin Pimentel III during his second State of the Nation Address last July 24.

In the budget, the education will get the biggest share with a proposed funding of P691.1 billion.

But for Rep. Juliette Uy, of the Misamis Oriental 2nd district, a bigger chunk of 2018’s budget is needed to rebuild school buildings that were damaged due to the heavy fighting between the government forces and armed extremists in Marawi.

Uy said the legislators, especially the representatives from Mindanao, have agreed to approve the proposed budget of the education sector so portions of it could be used in rebuilding school buildings and classrooms destroyed in the Marawi conflict.

In a recent meeting here, she said there was consensus among majority of the members of Congress from Mindanao to support the
budget, particularly in rebuilding Marawi.

“Although we did not promise, but we will try out best to help, especially in the allocation of the budget [for the construction of Marawi]. We, the Mindanaoan legislators, will fight for its approval,” she said.

Deputy House Speaker Ferdinand Hernandez, of the 2nd district of South Cotabato, said some items in the 2018 budget will be dedicated to the rebuilding of Marawi, adding the assessment of the damage may have to come later as the conflict is still ongoing there.

News reports quoted government officials as saying the Duterte administration has allocated P20 billion for the reconstruction of Marawi.

The Department of Budget and Management (DBM), in its website, said the release of the P20 billion rehabilitation package will be on the “multi-year scheme,” with P5 billion to be downloaded this year, another P10 billion for 2018, “and an additional budget yet to be determined for 2019.”

DBM Secretary Benjamin Diokno in the same article said the initial fund of P5 billion for 2017 “will be sourced from the 2016 and 2017 NDRRM [National Disaster Risk Reduction and Management] Fund with a combined remaining balance of around P7.4 billion and the 2017 Contingent Fund with a balance of almost P3.35 billion, both as of July 2017.”

Speaking to reporters during a forum here recently related to the rebuilding of Marawi City, Hernandez said that since all the government agencies have already received and utilized their allocation for this year, Congress can approve more funding for Marawi in the 2018 budget.

“Incident like this [Marawi crisis] is so big a problem that should require allocation of a big budget,” he said, although he has yet to divulge the exact amount allocated for Marawi.

Hernandez clarified the actual assessment of the magnitude of the destruction in Marawi can only conducted after the conflict has ended, but some national agencies can now make an estimate based on the number of evacuees and how much the government has already spent for the humanitarian assistance.

Rep. Maximo Rodriguez Jr., of the city’s 2nd district, said there should be a continuing study on how to rebuild Marawi, specifically on the housing of its civilians and the establishments of the business sector.

In a separate interview, Sultan Nasser Sampaco, chairman of the Marawi Sultanate League, said the physical rehabilitation of Marawi is not enough as he urges the Duterte administration to also consider providing financial aid to business owners who had lost their investments in the conflict.

Sampaco has urged the government to help the Maranao business owners get back on their feet but without them paying interests.

“They have already lost their business. The government must not anymore give them many requirements before releasing the financial assistance,” he added.(davaotoday.com)