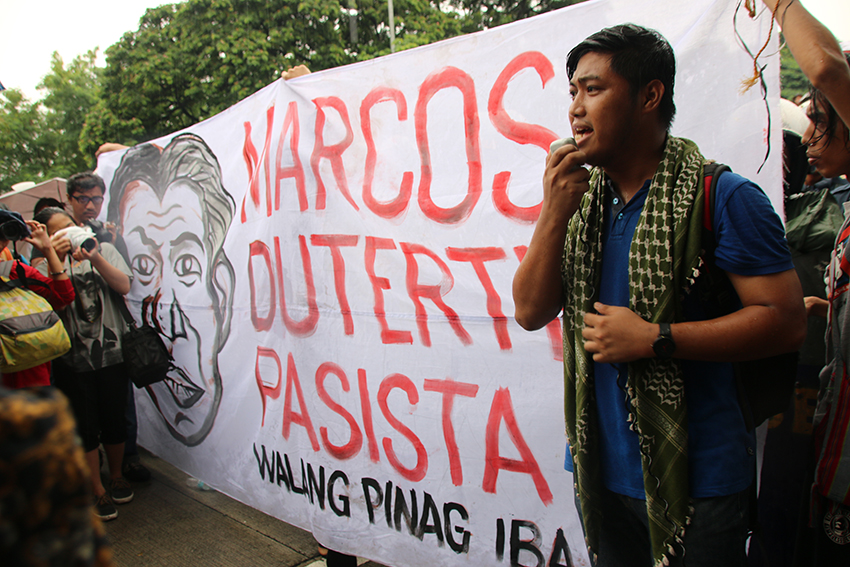 MANILA, Philippines – More than a thousand Lumad and Moro delegates to this year’s Lakbayan of National Minorities stormed the Libingan ng mga Bayani (LNMB) in Taguig City on Monday, September 11 to protest and condemn what they perceive as deliberate moves of the Duterte administration in glorifying the late dictator Ferdinand Marcos Sr.

Protesters bravely faced the police and army officers equipped with truncheons and geared with helmets who were tasked to secure the gate and perimeters of the LNMB as supporters of the late dictator were gathering inside to celebrate the 100th birth anniversary of Marcos.

In a press conference in Cagayan de Oro City on Saturday, September 9, Duterte said he sees nothing wrong in declaring the local holiday saying that the Ilocanos view the former President as “the greatest president.”

But for the victims of Martial Law, Duterte’s action is “an insult”.

NO HERO. More than a thousand Lumad and Moro people who are part of this year’s Lakbayan stage a protest rally at the Libingan ng mga Bayani in Taguig City on Monday, September 11. The protesters condemn what they describe as President Rodrigo Duterte’s “glorification” of the the late dictator Ferdinand Marcos whose 100th birthday anniversary is observed on this day. (Alex D. Lopez/davaotoday.com)

“His actions insult the memories of the victims of martial law and those who fought Marcos fascist dictatorship,” said Joanna Cariño, co-chair of Sandugo and herself a victim of martial law.

Cariño said Duterte is glorifying Marcos and at the same time exonerating the former dictator and his regime from their crimes against the Filipino people.

“Duterte should be reminded of the crimes Marcos committed against the people, the killing of Cordillera leaders such as Macliing Dulag, the attack on the national minorities such as the massacre of the Moro people from Jabiddah and Palembang, and the attack against the lumads such as the Marag Valley massacre that nearly wiped out families, clans and even tribes,” she added.

The group Sandugo also hit Duterte for suggesting that the Marcos family will be provided with immunity from arrest in exchange for their willingness to return ill-gotten wealth.

In the same protest, Jerome Succor Aba, national chairperson of Suara Bangsamoro decried the intensification of the all-out war through the declaration of martial law in Mindanao.

“Duterte is reviving the crimes of President Marcos against the national minorities. His all-out war and implementation of the war on terror has led to ethnocide or the obliteration of their culture and belief due to vilification and direct threat,” Aba said. 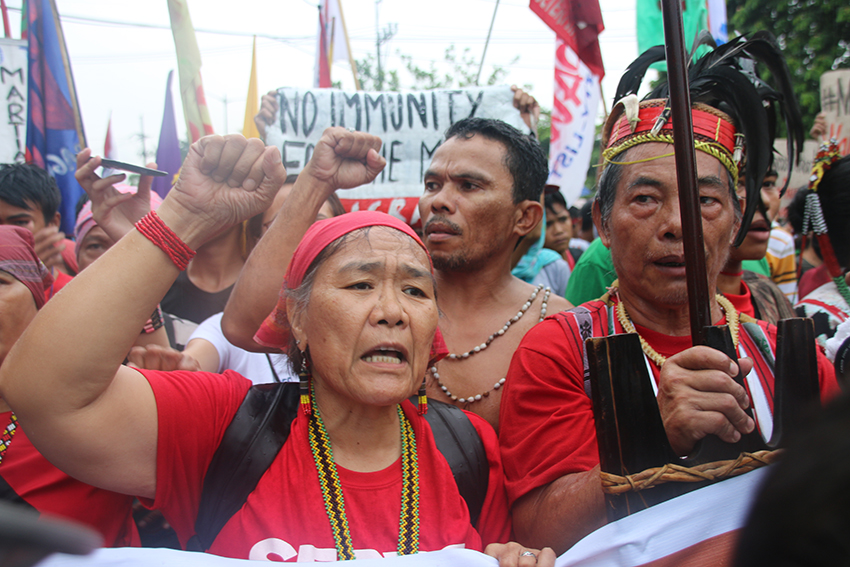 NEVER FORGET. Lumad and Moro protesters outside the Libingan ng mga Bayani on Monday, September 11, remind President Rodrigo Duterte of the crimes of the late dictator Ferdinand Marcos committed against the indigenous and Moro people in Mindanao. (Alex D. Lopez/davaotoday.com)

He said a total of 33 Lumad and Moro leaders and members of various organizations were already killed as Duterte stepped up the military operations especially in the countryside.

“Just like Marcos, his (Duterte) war policy on drugs and terrorists as well as the implementation of counter-insurgency Oplan Kapayapaan is already on the brink of genocide and ethnocide and his threats to suppress the democratic rights of the people is already pushing his leadership into a dictatorship,” Aba pointed out.

The group also hit Duterte’s recent threat to declare martial law in the whole country if gatherings and rallies would turn violent.

Other groups, including Selda (Samahan ng Ex-Detainees Laban sa Detensyon at Aresto) and CARMMA (Campaign Against the Return of the Marcoses to Malacañang), also joined the national minorities during the protest rally at the LNMB on Monday.

In a statement, Selda and CARRMA said Marcos has never been worthy of a tribute, not even a provincial holiday.

They also hit Duterte for declaring September 11, Marcos birthday, as a special holiday in Ilocos Norte and lambasted what they said as the “family affair” that the Marcoses do at the LMNB.

“It has always been a family affair because it is the surviving kin of Ferdinand Marcos who have benefitted from all the ill-gotten wealth. This celebration is part of the political rehabilitation of the Marcoses, courtesy of President Duterte,” the group said. (davaotoday.com)