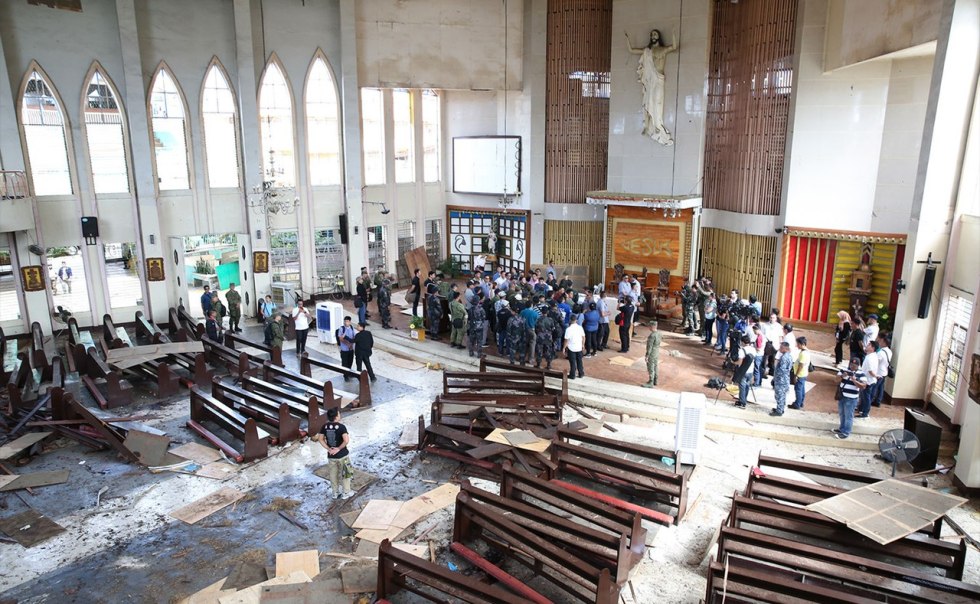 President Rodrigo Duterte conducts an inspection inside the Cathedral of Our Lady of Mount Carmel in Jolo, Sulu on Monday, January 28, 2019 where two explosions occurred inside and outside the church last January 27. (Malacañang Photo)

DAVAO CITY, Philippines — A progressive Moro group is hopeful that the deadly explosion that hit a Roman Catholic church in Jolo, Sulu on Sunday morning will not be used to divide the Christian and Muslim communities amid persistent threats of terrorism from lawless groups, a spokesperson said on Tuesday.

“We hope that this incident will not be used to divide the Moro and Christian people or the people of Jolo in general. In this difficult time, we need to stand together against inhumane attacks and violence,” Jerome Aba, spokesperson of Suara Bangsamoro said on Tuesday.

Aba questioned the effectivity of Martial law in Mindanao, saying the twin bombings in Jolo, Sulu happened despite such implementation.

“The series of bombings in Mindanao amidst Martial Law only proves its ineffectiveness in securing peace in the region,” he said, adding that President Rodrigo Duterte has failed to prevent bombings and quell violence in Mindanao.

Aba said that in 18 months, Duterte has deployed 75 percent of government forces in Mindanao. It even mounted thousands of checkpoints and billions of funds funneled to the military’s intelligence operations.

“And with abuses and bloodshed caused by his martial rule, the public must demand Duterte’s accountability for his inutility in solving conflicts in Mindanao and call for the lifting of Martial Law in Mindanao,” Aba added

The deadly explosion—which killed 20 persons and injured more than 100 others— at Mt. Carmel Cathedral in Jolo, Sulu last Sunday demonstrated the failure of Martial law in securing peace in the region, according to Aba.

“The series of bombings in Mindanao amidst Martial Law only proves its ineffectiveness in securing peace in the region,” Jerome Aba of Suara Bangsamoro said on Tuesday.

However, Malacanang on Monday downplayed the claims of an “ineffective” Martial law in Mindanao.

“They’re saying that despite martial law, there has been bombings, and therefore martial law should be lifted. There’s more reason that martial law should be in place,” Presidential Spokesperson Salvador Panelo told reporters in a press briefing. “The fact alone that there’s one incident of bombing in the past year, that means martial law is effective. Can you imagine how many bombings there would have been if there was no martial law there in operation?”

Aba said the blasts happened days after the ratification of the Bangsamoro Organic Law (BOL), illustrating that unrest in Moro areas is far from over.

“We fear that this incident will be used as a justification by the government to pursue intensive militarization of Jolo and other Moro communities which will then lead to human rights violation of the Bangsamoro,” according to Aba.

“Just like what we have seen in the past, the pursuit of “terrorists” has been a convenient excuse to obscure AFP atrocities against the Moro people such as killing, arresting and accusing innocent civilians as members or sympathizers of Abu Sayyaf, Maute or other groups that pledge allegiance to ISIS,” he added.

The Institute for Autonomy and Governance (IAG) also condemned the Jolo blasts.

“We condemn the bombing of Jolo Catholic Cathedral during the celebration of the Eucharist on Sunday, January 27, 2019… No doubt, the perpetrators of this crime against humanity had laid a careful plan and execution of said plan to inflict massive deaths and destruction to innocent civilians and regular churchgoers while at prayer,” IAG said in a statement.

“As we condemn these crimes against humanity, we also pray and continue to work for peace and security and good governance in our community by joining hands in rebuilding what these evil men wish to destroy,” it added. (davaotoday.com)