NDF chair Jalandoni says Duterte ‘not a saint, but…’ 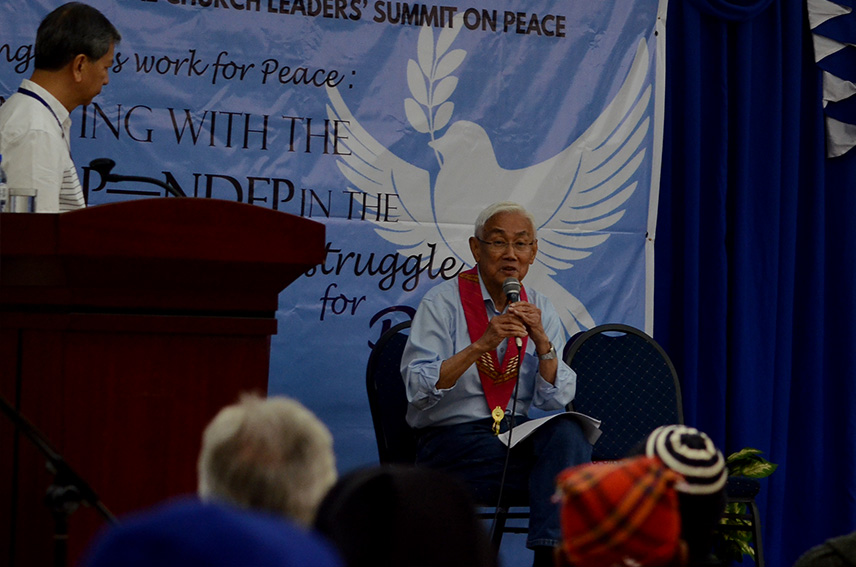 Luis Jalandoni, chairperson of the National Democratic Front of the Philippines peace panel meets with church leaders in a national summit on peace held at the Homitori Inn in Davao City on Wednesday, September 21. (Zea Io Ming C. Capistrano/davaotoday.com)

“President Duterte is not a saint. He has contradictions,” said NDFP peace panel chairman Luis Jalandoni.

Jalandoni was a speaker at the 5th Ecumenical Church Leaders Summit on Peace organized by the Philippine Ecumenical Peace Platform held at the Homitori Inn here on Wednesday, September 21.

He said Duterte’s standing up to the United States and his cooperation with the revolutionary movement for more than 30 years are positive.

US’ presence in Mindanao

During his visit to at the 10th Infantry Division headquarters in Mawab, Compostela Valley province on Tuesday, September 20, Duterte reiterated his tirade against the United States whom he described as the cause of the conflict in Mindanao.

Duterte cited his dialogue with young Muslim fighters who explained to him their stand against the US’ military presence in Mindanao.

He said the group told him that whenever they see the Americans, they think that the enemy is still the Americans who are using Filipino soldiers.

“That is why in one of my statements, I didn’t say that they should immediately leave. I said there will be some time in the future, I will ask the Special Forces to get out, and there are about almost 117 of them. Leave so that I can talk with them and show them that you are not here anymore until we reach an agreement then you should leave Mindanao,” Duterte said.

“I never said get out of the Philippines for after all we need them in the South China Sea. We don’t have armaments, but we are not also ready to go to war with China,” Duterte said.

He said, fighting China “will just be a massacre”.

Jalandoni said they welcome Duterte’s expression of an independent foreign policy and that Duterte’s position is correct.

“Wala namang mabuti, wala namang ginagawang tulong yung US dyan, nag-iintelligence work lang laban sa kanya o laban din sa rebong kilusan. Walang karapatan yung US na manatili sa Philippine territory, it goes against the constitution pa nga eh (The US presence brings no good, they don’t provide any help and are only engaged in intelligence work against Duterte and the revolutionary movement. The US has no right to stay in the Philippine territory and it goes against the Constitution),” Jalandoni told Davao Today in an interview.

But Jalandoni said the Communist movement does not condone Duterte’s anti-drug war.

“The Communist Party of the Philippines issued a statement on August 12 criticizing severely this drug war and the thousands of deaths that has arisen,” Jalandoni said.

The CPP in its statement said Duterte’s anti-drug war “has rapidly spiralled into a frenzied campaign of extra-judicial killings and vigilante murders perpetrated by the police and by police-linked criminal syndicates.”

“The rights of tens upon thousands of people are being violated as the criminal justice system is upturned,” it said, adding that the government’s anti-drug campaign is anti-people and anti-democratic.

“Human rights are being violated with impunity by police personnel, emboldened by Duterte’s assurances of “I got your back” and his public declarations of contempt against human rights,” it said.

Jalandoni admitted Duterte has released controversial and questionable statements but said that his actions are more important.

“If we talk about what he has done, I have positive things to say. If it’s what he says, there are those controversial, questionable. But for me, what is most important is his actions are connected to the people,” he said.

Jalandoni also said the NDF  will join President Duterte in his drive to have peace negotiations that will address the root cause of the armed conflict if he gives amnesty to all the political prisoners.

“It will also give a push,” he added.

He said the future of the country lies “mainly” in the hands of the Filipino people.

“To push for peace negotiations to arrive at just and lasting peace through negotiated settlement or whether we have to fight for what is happening now, we don’t have any saints to deal with,” he said.

The GRP and NDF panels will hold the second round of talks on October 6 to October 10 in Oslo, Norway. The original date of the talks was previously set on October 8 to October 12.

This round of the GRP-NDFP formal talks will discuss outlines and drafts on the substantive agenda of social and economic reforms and political and constitutional reforms. The proposed amnesty proclamation for all listed detained NDF members and the cessation of hostilities and disposition of forces will also be discussed. (davaotoday.com)