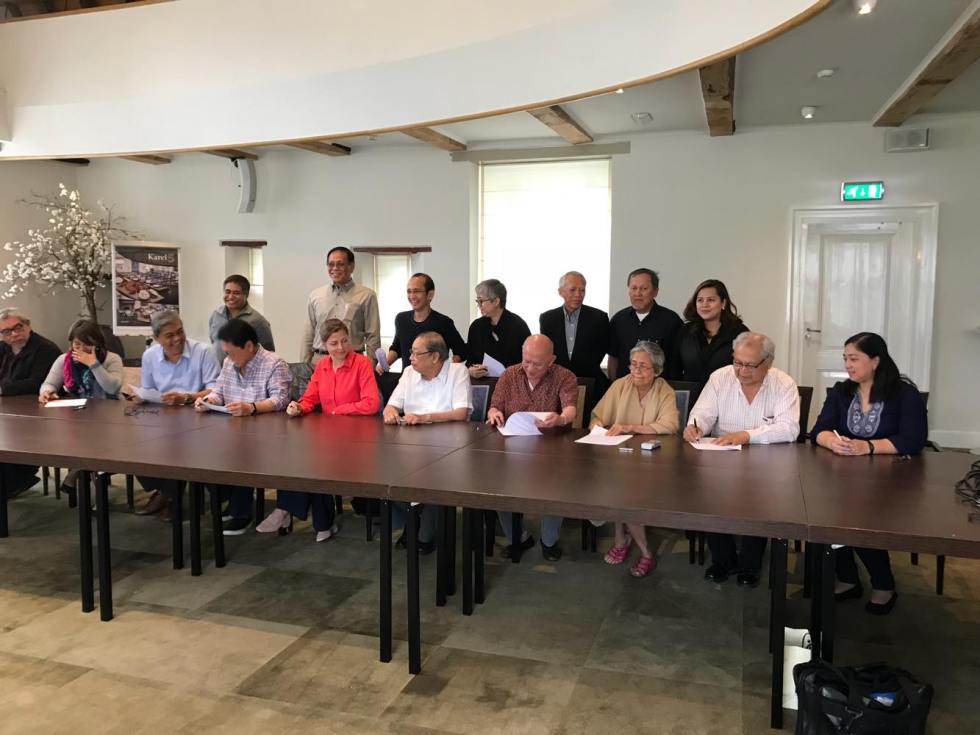 Signing of the Stand Down Agreement on June 9, 2018 by the Government of the Philippines and the National Democratic Front of the Philippines negotiating chairmen Labor secretary Silvestre Bello III and Fidel Agcaoili and, as witness, Royal Norwegian Government Special Envoy Idun A. Tvedt. (Photo from Joma Sison’s Facebook Page)

DAVAO TODAY, Philippines – The National Democratic Front of the Philippines released the signed agreements with the Philippine Government’s peace negotiating team which disclosed the terms of the temporary cessation of hostilities, land reform and national industrialization and release of political detainees.

The release, according to NDFP negotiating panel chairperson Fidel Agcaoili is “in the interest of truth and transparency in view of the GRP’s (Government of the Republic of the Philippines) decision to unilaterally postpone the resumption of the formal peace talks in Oslo, Norway on June 28 and the apparent desire of the GRP to bring the formal talks to the country.”

For his part, NDFP Chief Political Consultant Jose Maria Sison said the press and the public have the right to know the content of the stand down agreement that was signed on June 9, 2018 by the two negotiating panels.

“Agreements such as the Stand down, Interim Peace Agreement and the agreement pertaining to the scheduled resumption of the peace talks on June 28-30 are of public interest and have become archival documents worthy of contemporary and historical study,” Sison said.

NDFP furnished to Davao Today a copy of the Interim Peace Agreement signed by Hernani Braganza and Atty. Efren Moncupa of the GRP peace panel team and NDFP’s Agcaoili and Atty. Edre Olalia.

The released documents included the draft Amnesty Agreement for the release of political prisoners received with initials by the GRP contingent.


The GRP, however, has remained mum in publishing the documents generated during the Backchannel talks between the two parties.

Presidential Peace Adviser Jesus Dureza in a statement on Friday said that the gains earned during the backchannel talks is protected with the resetting of the peace talks.

“Getting public support and goodwill even while still in the course of peace negotiations is truly indispensable. Suddenly springing finished peace agreements upon a public who have been kept in the dark during the negotiations can certainly undermine those efforts,” he said.

Dureza added they will instead conduct public consultations with the different sectors.

Agcaoili scoffed at Dureza for keeping the results of the backchannel talks secret to the public.

He said one pre-requisite for ensuring the gains to be protected is for both sides to stand by agreements.

“The unilateral decision of the GRP to disregard agreements derails and sabotages the gains achieved if not to totally cancel the talks,” he said.

He said the draft CASER (Comprehensive Agreement on Socio Economic Reforms) is a product of the consultations conducted with various groups, personalities and communities.

These groups are clamoring for the resolution of the problems of landlessness, poverty, unjust wages, poor working conditions of workers, lack of industries, and the foreign dominance in the country’s economy, politics and culture.

The NDFP expressed openness to have representatives of different sectors to attend in formal peace talks as observers and hold separate or joint meetings with the panel members of both sides.

President Rodrigo Duterte called off the scheduled resumption of peace negotiations between the government and the National Democratic Front of the Philippines on June 28 in Oslo, Norway. (davaotoday.com)