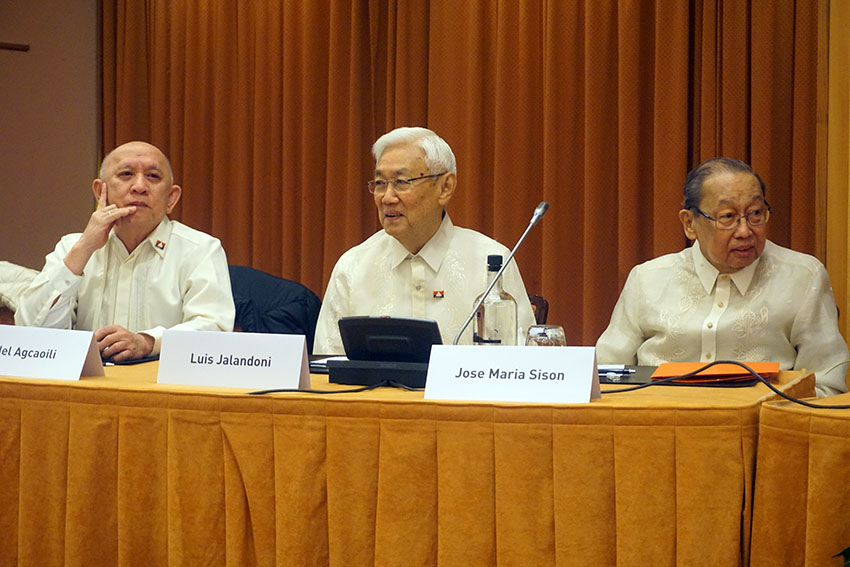 By Raymund B. Villanueva
Kodao Productions

GENEVA, Switzerland — There is no clear basis for the National Democratic Front of the Philippines (NDFP) to rush into reciprocating the government’s unilateral declaration of ceasefire, its chief political consultant Jose Maria Sison said.

In a statement, Sison said that while there is ongoing communication between the NDFP and Government of the Republic of the Philippines (GRP) negotiating panels, there is yet no agreement for reciprocal unilateral ceasefires in regard to efforts in containing the coronavirus disease (COVID-19) pandemic.

In asking for certain “considerations, requirements and modalities” for the NDFP to think about reciprocating GRP’s unilateral ceasefire announcement, Sison said there has to be clarifications.

He added that without such understanding, the ceasefire announcement by Malacañang Palace is “premature, if not insincere and false.”

President Duterte has decided to declare a unilateral ceasefire against the Communist Party of the Philippines (CPP), the New People’s Army (NPA), and the NDFP effective 00:00 hour of March 19 to 24:00 hours of April 15, Presidential spokesperson Salvador Panelo announced Wednesday evening in Manila.

According to Panelo, the President directed the Armed Forces of the Philippines (AFP) and the Philippine National Police (PNP), including the national defense as well as the interior and local government departments, to cease and desist from carrying out operations against the revolutionary forces.

Duterte last Monday publicly asked the underground communist groups for a ceasefire during the COVID-19 pandemic, promising to repay them “with a good heart in the coming days” if they agree.

Sison, however, said the NDFP is not assured and satisfied that the ceasefire announcement is based on national unity against COVID-19, the appropriate solution of the pandemic as a medical problem and the protection of the most vulnerable sectors of the population, including workers, health workers, those with any serious ailments and the political prisoners.

“Unless it receives sufficient assurances from the GRP, the NDFP will be inclined to think that the GRP unilateral ceasefire declaration is not sincere and is not intended to invite reciprocation by the NDFP but is meant to be a mere psywar (psychological warfare) trick,” Sison warned.

Sison pointed out that according to the people and their own forces in the Philippines, Duterte’s lack of sincerity in seeking a real ceasefire is manifested by the following:

1) The militarist lockdown on the whole of Luzon is mean not to fight the COVID-19 pandemic but to intimidate the people, suppress democratic rights, commit human rights violations and prevent the working people from going to their workplaces, and immobilize even the health workers and people who wish to be tested and treated for COVID-19 and other serious ailments; and

2) The AFP and the PNP continue to redtag, abduct and murder social activists, including human rights defenders, in urban areas and to unleash attacks against the people in the guerrilla fronts of the NPA.

The NDFP and the CPP earlier condemned the killing of senior cadre Julius Giron, his physician Lourdes Tan Torres and their aide last March 13 in Baguio City. Human rights activists also blamed the military for the abduction and killing of choreographer and activist Marlon Maldos last Tuesday, March 17, in De la Paz, Cortes in Bohol province.

Sison said that despite all the above, the NDFP continues to hope that Duterte orders the GRP negotiating panel come to clear terms with its counterpart “for the benefit of the people.”

“Promises of Duterte, such as doing a good turn from a good heart, can be believed only as they are realized promptly and according to a definite schedule,” he said. (Reposted by davaotoday.com)